Before even discussing the plethora of other Brand previewed in 22 JUMP STREET’s three trailers (Green band, Green Band Alternate and Red Band) it is worth noting that the same Chevrolet Camaro 1970 appears heavily in both the movie and the promotional material (see above).
Given this continuity in use it seems reasonable to assume the Chevrolet car will once again be portrayed as a cool, fast, old school vehicle that will be involved in car chases and action scenes.

As the two clumsy cop buddies head to college an important element of the movie is of course alcohol. However the trailers make one thing obvious: no Budweiser, Coors or any beer or liquor Brands in this movie.

Indeed, despite numerous scene involving booze not a single real brand appears in the trailers.  The reason?  Most likely the implication that students, hence potentially under 21s, would be drinking any brand appearing, and the fact that this is a no-no for alcohol brands (see Budweiser’s thoughts on their depiction in Hangover II).

Whilst alcohol may be the primary element, what is college without sports?  The trailers clearly indicate that football will be the sport of choice and the brand associated with it will be Under Armour.  Whilst discreet, in one of the football scene players are wearing Under Armour socks and in another Channing Tatum is seen wearing their college’s uniform donning the Under Armour logo. 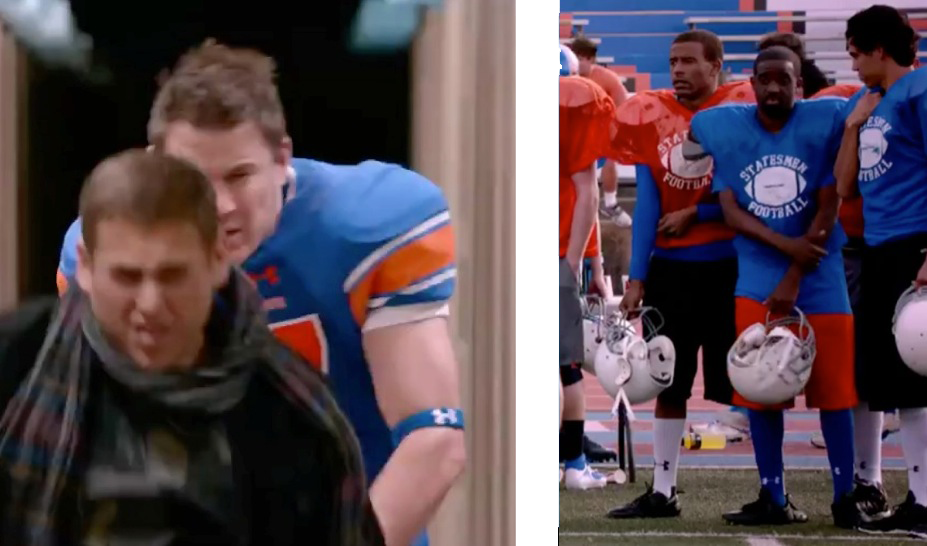 Hence, following visible appearances in movies such as The Blind Side or The Dark Knight Returns, Under Armour is once again portrayed as THE football brand of reference.

Both Channing Tatum and Jonah Hill are seen wearing Nike trainers, with the trailers even containing a close up of one of these. Channing Tatum is also shown extensively wearing a Nike jacket, but also Adidas shoes, both in the college environment.

On the topic of Channing Tatum’s clothing, he is also seen wearing Calvin Klein boxers as he dives through a wall of beer.

Whilst it only is only shown for two seconds, the Lamborghini brand will clearly be significantly present in this summer movie. Channing Tatum is seen putting up a Lambo poster up in his new college dorm room – implying it as an aspirational brand – and the later in what appears to be an action scene.

Finally, what would college be without some snacks.  The trailers shows a scene with Channing Tatum holding a bag of Doritos.  Whilst there is no indication that marijuana is involed in this scene from the trailers, given Doritos place in weed culture it is not a stretch to imagine that this movie is no exception.