Movies are filled with Brands, but contrary to popular belief, most of them appear organically. Alcohol Brands are not paying to line bar shelves surrounded by their competitor’s, just as phone manufacturers are not paying for their products to be seen for 2 seconds without their logo being shown.

Check out our full article on signs it’s not product placement.

However, when a Brand appears extensively or obviously in entertainment then it tends to be product placement. This means that, at the very least, Brands have collaborated with movie producers by providing free products. In some cases they also provide significant monetary incentives.

Here is a look at 5 major product placements that you will be unable to miss in 2015 movies.

All stats regarding Brands’ presence in entertainment come from Concave Brand Tracking data. 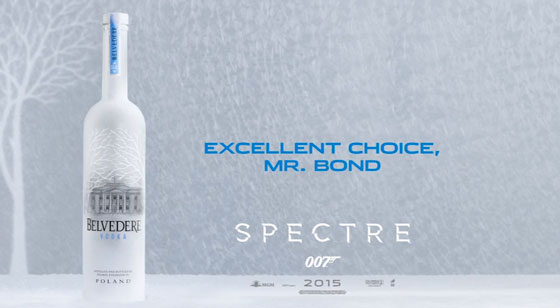 In the midst of both the official announcement of the next James Bond and the Sony hacks, a big story has Belvedere’s presence in the upcoming 007 movies.

Despite no trailer yet being out, with both parties acknowledging the deal – Belvedere has even posted a video about it – there is no doubt Belvedere will get significant exposure from it product placement in SPECTRE. This will be along with Bond regulars such as Sony, Land Rover and Aston Martin.

Historically, Belvedere has not been a particular prominent vodka Brands in movies, and we have to go back to SUPERMAN RETURNS in 2006 to find a clear case of product placement in a yearly top 10 US box office movie.

The one exception that is clearly product placement is Smirnoff in CASINO ROYALE (2006). While Daniel Craig was not directly associated with the Brand in that movie, Smirnoff has a long history with the Bond franchise, going back as far as DR. NO (1962). However, this history has seemingly been swept away to make room for Belvedere.

Belvedere’s more recent appearances in major movies were in the BLING RING (2013) and THE GREEN HORNET (2011).

With two trailers having been released for the movie adaptation of the raunchy best seller, it is clear that Audi will feature in it. Furthermore, Audi has announced their partnership with the movie, confirming that their appearance will be product placement.

While Audi will be paying for their appearance – whether just in cars or with further compensation as well – the reason it will star in the movie goes back to the source material. Audi was already Christian Grey’s car Brand of choice in the original books. The first book – on which the 2015 movie is based – mentions Audi over 15 times. In comparison, Apple, which also appeared in the trailers, is mentioned 4 times and Blackberry is mentioned 27 times. Given Blackberry downfall since the book was written, it will be interesting to see whether, like with Audi, they stick with book’s Brand, or take “artistic liberties”.

While Audi had no involvement in their Brand appearing in the book, the author chose it due to its perception as a high-end luxury car, which fit the role of Christian Grey’s vehicle Brand.

This portrayal fits with the image which Audi has communicated in previous product placement deals such as in the IRON MAN movies. Indeed, Audi being driven by BDSM-obsessed entrepreneur Christian Grey draws strong parallels with Robert Downey Jr. driving their vehicles as playboy billionaire Tony Stark.

Vince and his boys are back. However, in trailer we see no sign of the 1965 Lincoln Continental which we got used to see every episode for 8 seasons. Instead, the friends are repeatedly shown cruising in Cadillac vehicles, both a 2011 Ciel Concept and a 2015 Escalade. Add to this the spotting of another Cadillac and couple of Chevrolets in the background, and we can be pretty much certain that GM struck a product placement deal. Hence we can expect Cadillac, Chevrolet and probably other GM Brands to get significant screen time.

Cadillac has been one of the most common Brands in movies. From 2003 to 2013 Cadillac appeared in 36 top 10 yearly US box office movies, the 7th most for any Brand.

In 2014 Cadillac appeared in movies such as TRANSFORMERS: AGE OF EXTINCTION, TAMMY, DRAFT DAY, CAPTAIN AMERICA: THE WINTER SOLDIER, SIN CITY: A DAME TO KILL FOR and LET’S BE COPS, to name just a few.

2. Samsung in AVENGERS: AGE OF ULTRON (May) & JURASSIC WORLD (June)

From 2003 to 2013, in yearly top 10 US box office movies, Samsung was only the 10th most visible electronics. Apple, Sony, Dell, Motorola, LG, Nokia, Panasonic, HP and Sony Ericsson were all more visible when accounting for number of movies, screen time, discernibility, logo visibility and movie ticket sales.

However, in recent years, Samsung has ramped up its product placement activities and now has entire movies filled with their products. For instance 2014 movies DRAFT DAY, LUCY, RIDE ALONG and 3 DAYS TO KILL all feature Samsung phones, TVs, camcorders, tablets and other electronics as well as billboards in the background.

Rather than placing specific products, Samsung has seemingly adopted the strategy of picking movies and making sure almost every electronics product used is from Samsung.

As for 2015, based on their trailers, two major movies which are part of this strategy are AVENGERS: AGE OF ULTRON and JURRASIC WORLD.

In the trailer for AVENGERS: AGE OF ULTRON we see a close-up of a Samsung tablet as well as a Samsung store in the background of another shot. In JURRASIC WORLD’s trailer we see Samsung phones, phablets, TVs and a smartwatch. All this indicates that not only will both these movies feature Samsung, but a lot of it.

While Samsung strategy of omnipresent product placement has clearly begun to show, none of 2014’s top 10 box office movies were filled with their products. However if the hype behind AVENGERS: AGE OF ULTRON and JURRASIC WORLD is anything to go by, we could easily find them among – or even atop – the box office top 10 for 2015. This would be a major marketing victory for Samsung, but one they are clearly banking on due to the financial commitment this strategy must require.

1. Beats by Dre in TO WRITE LOVE IN HER ARMS

In the first trailer for the teen bio-drama, TO WRITE LOVE IN HER ARMS, of the 118 seconds of the movie that are shown, Beats by Dre headphones are in 17 of them, so almost 15% of the time. Based on this, we can expect Beats to be present throughout the movie, worn both by the star – Kat Dennings – and her friends. This will be the first major, product placement effort by Beats by Dre – or any headphones Brand – in a movie, that goes beyond a single appearance, or being worn by just one character.

While Beats by Dre dominates the product placement of headphones in music – they accounted for 58% of headphone appearances in music videos for 2014 weekly Billboard Hot 100 song – things are very different in movies.

Whether you work for a global Brand or write about them, please do not hesitate to contact us at info@concavebt.com if you would like to learn more about our methodology, data or the services we provide.