Adidas ranks as the 5th most visible Brand in PITCH PERFECT 2 (2015), behind Nike, Apple, The Voice and Beats by Dre.

While most of The Bellas wear Nike clothing and shoes both in the retreat scene and on campus, some opt instead for Adidas products, most notably Ester Dean. Rebel Wilson is also seen carrying an Adidas bag early on in the movie. As such, Adidas gets much of the same contextual and demographical associations as Nike, but on a smaller scale. Adidas also suffers from a relatively low logo/name visibility of 50% vs. 92% for Nike. 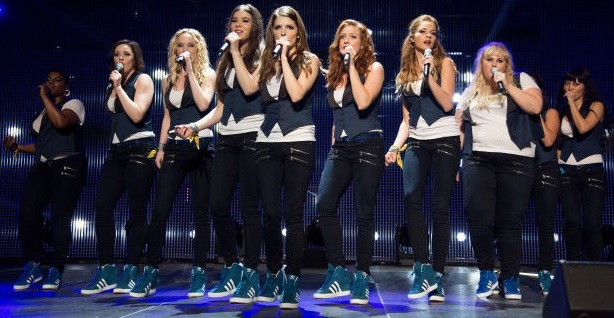 Adidas does however get a major visibility boost when every single member of The Bellas wear a pair of their Original Profi Up Wedge sneakers as part of their uniform in their final performance of the movie. This appearance makes up a majority of Adidas’ close to 2 minutes of total screen time. It also strongly associates Adidas with dancing, something we have found a lot in music videos, where the Brand ranked #1 most visible in 2014.

Check out Adidas across entertainment on our dedicated Pinterest board.