Concave Brand Tracking has combed through all 3 seasons of HOUSE OF CARDS, recording all recognizable Branded products that appeared in them. The resulting sample that our analysis looks at is made up of 39 episodes over 3 years. You can see the full report here.

While Apple is often the prime example of HOUSE OF CARDS’ affection for Brands, no concrete research had verified that it was actually the most visible Brand of all. Concave Brand Tracking‘s data can now definitively prove that is. In fact, in season 1 and even more so in season 2, Apple had significantly more visibility than any other Brand. In the most recent season, the 3rd one, Apple still leads the pack, but Samsung now closely follows as the 2nd most visible Brand. 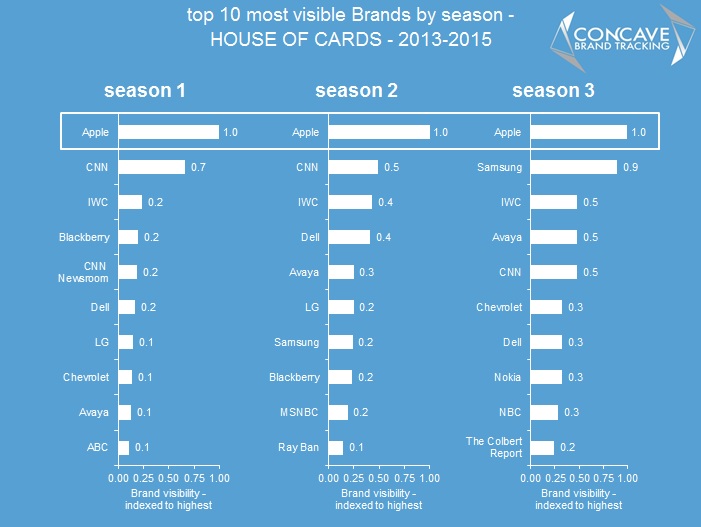 Apple’s #1 status across all 3 seasons comes from a combination of factors.

Apple’s widespread presence in HOUSE OF CARDS is largely due to its type of products being widely used in the show. Indeed, mobile phones, computers, laptops and tablets all ranked in the top 12 most visible products in the series. As such, many of these products were iPhones, iMacs, MacBooks and iPads.

Not only are Apple products included in the Brand lineups for these electronics products, but,  as the graph below shows, they dominate them.

In HOUSE OF CARDS’s 3 seasons Apple has had over 1 1/2 hours of screen time. This includes every single Apple product, even when more than one were on screen, and whether it was a close-up of an iPad or an iMac in the background.   This is more than any other Brand, and significantly more than most. Only 2 other Brands had more than 26 minutes of screen time across all 3 seasons. The aforementioned IWC, which appears in most scenes on Kevin Spacey’s wrist, and Avaya. The latter is the Brand of telephone found in the Capitol, the Oval Office, the White House residence and Air Force One.

Chevrolet, which as we saw, appeared in every episode, only had around 13 minutes of screen time across all 39 episodes. Washington Nationals only had 2 minutes.

So we have seen that a variety of Apple products have appeared in every single episode, and done so for longer than any other Brand. However, on top of this, Apple products are also quite discernible when on screen. While IWC and Avaya are often on screen, they are mostly seen in the background or very discreetly. Apple, on the other hand appears much more visibly. Across all 3 seasons Apple appeared in close-ups or in an obvious manner for 5% of its screen time. It appeared in a subtly in 39% and discreetly or in the background for 56% of its screen time. 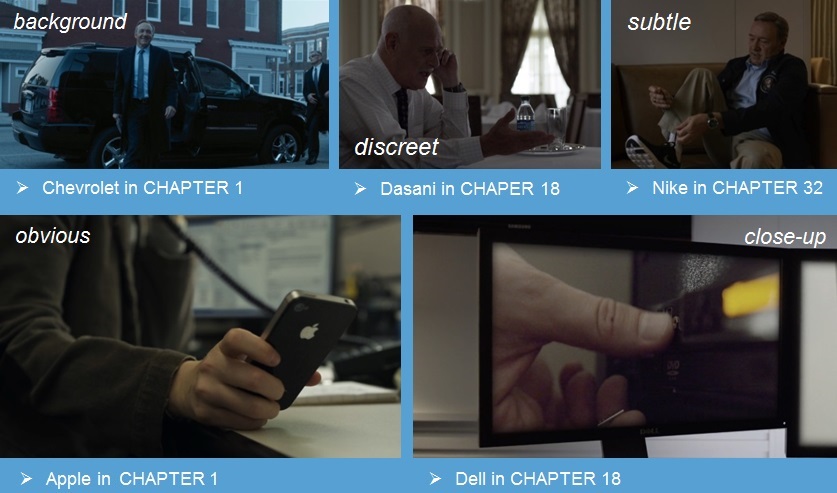 Brands such as CNN, MSNBC, Samsung or LG had higher %s of close-up screen time than Apple. But these all had less total screen time.

Various Apple products appeared in every episode, for a long time and in a relatively visible manner. The final element that contributes to Apple being the most visible Brand in HOUSE OF CARDS is its logo/name visibility. Indeed, Apple’s logo is seen in 39.4% of its screen time. While this is lower than Chevrolet or CNN, it is higher than competing tech Brand Dell and much higher than the overall % for all Brands of 26%.

As we saw in the first graph, no other Brand had anywhere near as much visibility as Apple in seasons 1 and 2. In season 2, Apple had twice as much visibility as 2nd most visible Brand, CNN. However, in season 3, Samsung emerged as a serious contender, having 90% the visibility of Apple. Much like Apple, Samsung owed its visibility to a presence  in many episodes in the form of various products, considerable screen time and good discernibility. 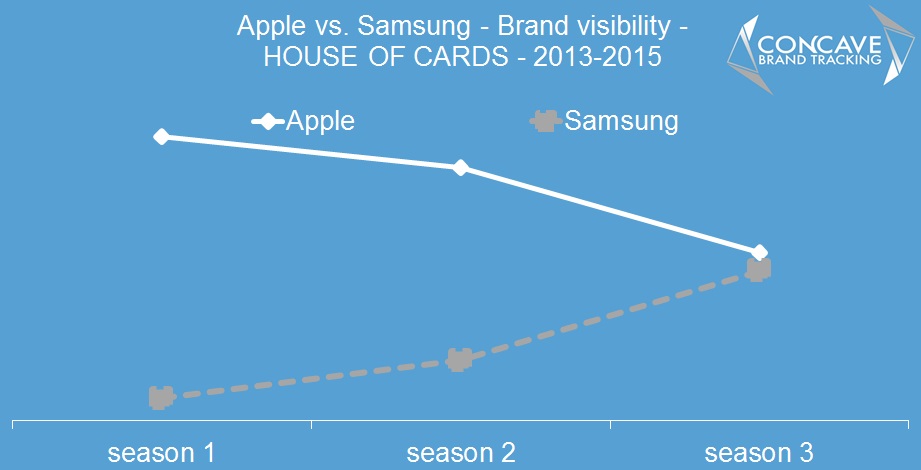