most brand-filled movies in 2018 – product placement

Of the top 100 highest grossing movies at the US box office in 2018, 90 featured brands on screen or in their dialogue. Here we look at the top 10 movies that had the most product placement and how much advertising value they generated for those brands. These figures factor the number of brands, their mentions, their screen time, their visibility and the movie’s commercial success.

THE MEG combined one of the lower box office grosses of these 10 movies with about 30 minutes of product placement screen time to generate 22 million dollars in advertising value for 32 different brands.

Melin and Nike were among the most visible brands. Both were worn by Rainn Wilson as the billionaire wannabee hipster villain in the movie.

Other brands that had significant visibility in THE MEG included Oakley, Dell, Apple and Carl F. Bucherer.

BUMBLEBEE featured 44 different brands, but over 50% of the value generated by these integrations came from the main two car brands – Volkswagen and Chevrolet – and the three band t shirt worn by Hailee Steinfeld: Motörhead, The Smiths and The Damned.

The main vehicle is a 1967 Volkswagen Sedan which is also the eponymous character of the movie. As such, Volkswagen got over 7 minutes of screen time and is mentioned in the dialogue. This was also the 16th most successful product placement in a single movie of 2018.

Other brands in BUMBLEEBEE included Hamilton Beach, Tab and Sony. 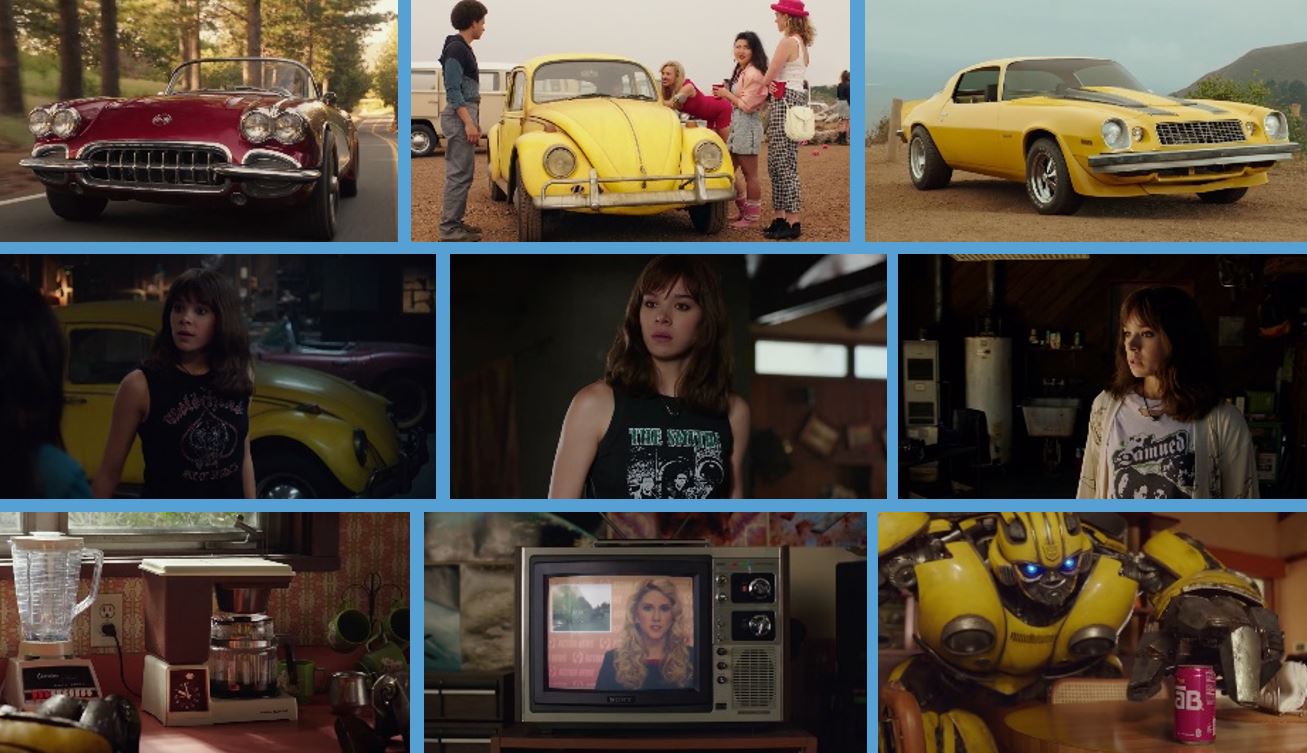 While BLACK PANTHER featured the least product placement of these 10 movies, its huge box office gross was enough for it to generate the 8th most total value for all the brands that did appear.

By far, the two biggest brands in BLACK PANTHER were Toyota and its luxury subsidiary, Lexus.  Between them, they received almost 7 minutes of screen time, which translated to 13.5 million dollars in advertising value. As such Lexus and Toyota in BLACK PANTHER were the 10th and 3rd most successful single movie product placements of 2018.

Thanks to the placement, Toyota was also the 8th most visible brand overall 2018 movies.

Other brands in BLACK PANTHER included Dell, BBC and Renault.

A STAR IS BORN featured the most on-screen brands of any movie in this top 10, with much of this coming in the form of music-related products. Indeed, nearly 1/3 the brand value generated was for microphones and another 1/3 was for instruments. Sennheiser, Gibson, Gretsch and Yamaha were among these brands. However, Shure was the big winner with almost 9 minutes of screen time which was worth 7.5 million dollars in advertising value and was the 4th most successful product placement in 2018 movies. Furthermore, this appearance along with significant screen time in BOHEMIAN RHAPSODY made Shure the 7th most prominent brand in 2018 movies.

Other brands in A STAR IS BORN included Ford, The Grammys, SNL and Harley-Davidson.

DEADPOOL 2 combined mentions of 34 different brands in its dialogue with appearances by 47 brands on screen for 35 million dollars in total product placement advertising value.

Unlike in some of the movies on this list, no single brand got an overwhelming percentage of this value. With 10% of the total value, Ford was the movies most prominent brand. Oxydo – the glasses worn by TJ Miller – followed, along with Budweiser, Ray-Ban and Carl F. Bucherer.

Some of the many brands that were mentioned included The Human Centipede, Apple, Arby’s, Airbnb and Fox & Friends.

The 41 different brands that appeared on screen in ANT-MAN AND THE WASP and the three that were mentioned in the dialogue combined for 37 million dollars in advertising value.

Old Focals, Mercedes-Benz, Samsung and Hyundai were among the most visible brands. However, Dell was the most prominent brand, with its laptops and monitors appearing throughout the movie. Furthermore, Dell’s placement in ANT-MAN AND THE WASP was the 8th biggest product placement in 2018 movies and was a large factor in Dell being the 2nd most visible brand in 2018 movies overall.

Other brands that appeared in ANT-MAN AND THE WASP included GMC, Pez, New Balance and Chevrolet.

Sony – which was also the 4th most visible brand in 2018 movies – also appeared fairly visibly in VENOM in the form of mobile phones, tablets and TVs.

Other brands in VENOM included Ducati, Reebok, Apple and the Golden State Warriors.

BMW was the most visible brand and this partnership was, in fact, the #1 most successful product placement in 2018 movies, valued at over 11 million dollars.

Apple was the 2nd biggest brand in MISSION: IMPOSSIBLE – FALLOUT and the #1 most visible brand in 2018 films overall.

While JURASSIC WORLD: FALLEN KINGDOM had only half as much product placement as its predecessor, it was still enough to create more advertising value than any other movie in 2018. This was highly driven by the 1.3 billion dollars it grossed at the global box office and hence the sheer number of people who saw the 35 brands on screen.

Apple was the biggest winner with over 9 million dollars of value. This partnership was also the 2nd biggest placement in 2018 movies, behind only BMW in MISSION: IMPOSSIBLE – FALLOUT.

BBC also had almost ¾ of a minute showing a full-fledged news report by british news channel near the beginning of the movie.

Grid, a now-defunct computer brand appeared as a vintage brand.

Beck’s had a very visible appearance as the main two characters bonded over a couple of their beers early in the movie.

disclaimer: Concave Brand Tracking does work with certain Brands in this article. However, as a market research company, our methodology is entirely objective. We are a 3rd party that provides insights into the presence and portrayal of Brands in entertainment. We are not directly involved in our clients’ strategic planning or the process of coordinating product placements.