Following much anticipation and delays due to the tragic passing of Paul Walker, FURIOUS 7 (2015) has finally hit theaters. Concave Brand Tracking headed to the movies and did a presence and portrayal audit of all Brands.

All screenshots from FURIOUS 7 (2015) used in this article are from promotional materials such as trailers and cast interviews.

We identified around 30 different Brands of cars. From those appearing throughout the movie to those seen for a fleeting second in the background. Some of these Brands are integral parts of the franchise while others are only appearing significantly for the first time. 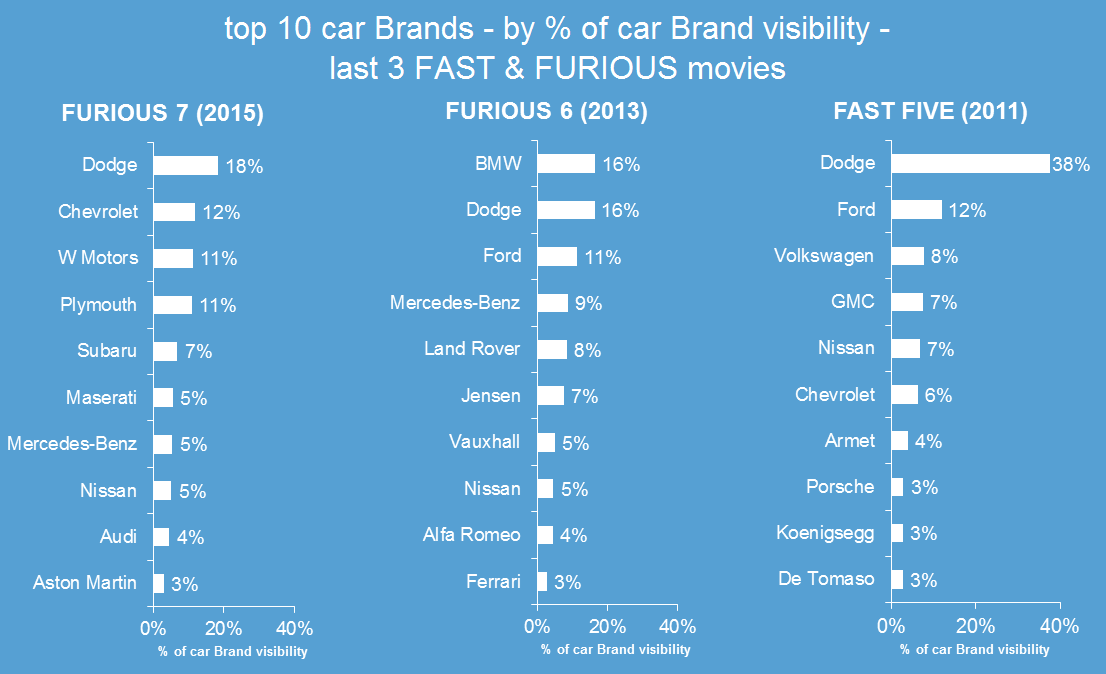 As the charts above show, Dodge has consistently been one of the most visible car Brands in the past 3 movies. Brands such as Chevrolet, Mercedes-Benz and Nissan also appear in FURIOUS 7 (2015) following appearances in the 5th and/or 6th movies.

On the other hand Aston Martin, Audi, Maserati, Subaru and W Motors all had their first significant franchise appearances in FURIOUS 7 (2015).

The Dodge Charger – specifically Dominic Toretto’s 1970 Charger – is by far the most iconic vehicle in the FAST & FURIOUS series. Dodge’s presence in the 7th installment is very slightly more visible than in the 6th but about half of what it was in 5th. Indeed, in FAST FIVE (2011) Dodge Chargers were driven by most of the main cast in the final showdown on the streets of Rio.

In FURIOUS 7 (2015) Vin Diesel is once again behind the wheel of his 1970 Charger. He also drives a 2015 Charger in Abu Dhabi. Dodge is associated with Vin Diesel in over 80% of its screen time.

In the remaining 20%, Dodge vehicles are driven by Michelle Rodriguez. She drives a 2011 Dodge Challenger in the infamous skydiving scene and a Dodge Viper in Abu Dhabi.

While Dodge is exclusively portrayed as the high performance American muscle Brand of choice for Dom and Letty, Chevrolet’s depiction is more varied.

On the one hand, Tyrese Gibson drives an old-school Chevrolet Camaro in the skydiving scene and a Caprice in the final scene, portraying Chevrolet in a similar way as Dodge, Plymouth or Nissan.

While the Chevrolet cars used by Tyrese Gibson account for almost 60% of the Brand’s screen time, the rest comes in the form of 2010 Chevrolet Suburbans. These vehicles are used by the secret government agency with which Dom and his team collaborate. As such, the Brand is shown as professional, associated with government agencies and used in action scenes. The Suburbans are also by used by Djimon Hounsou and his terrorist organisation.

W Sports appears exclusively through its 2013 Lykan Hypersport. It gets mentioned by name and we are informed that their vehicle is worth $3.4 million. It is the centrepiece of the Abu Dhabi sequence and receives almost 1 ½ minutes of screen in which its logo is visible. As such W Sports is the 3rd most visible car Brand in FURIOUS 7 (2015).

We had not seen much of Plymouth in the past 2 FAST & FURIOUS movies. However, it was quite visible in FAST & FURIOUS (2009) as Letty’s (Michelle Rodriguez) Brand of choice. With the crew back in California, Plymouth – which has been defunct since 2001 – returns to our screens.

Interestingly though, just as Letty was also extensively seen driving a Dodge in FURIOUS 7, Vin Diesel’s character reciprocates by also driving Plymouth cars. He drives Letty’s 1972 Plymouth Barracuda at the start of the movie, as well as a 1970 Road Runner in his first encounter with Decker Shaw (Jason Statham).

The late Paul Walker drives a 2011 Subaru Impreza WRX STi in the skydiving scene and its subsequent car chase. While this is the only scene in which Subaru gets any significant screen time, it gets around a minute and is the only car driven by one of the crew members with a clearly visible logo.

While Subaru has never been one of the most visible car Brands in the previous movies, the exact same model was used in FAST FIVE (2011).

Here is also a breakdown of exactly which car Brands were associated with each of the main 6 cast members. 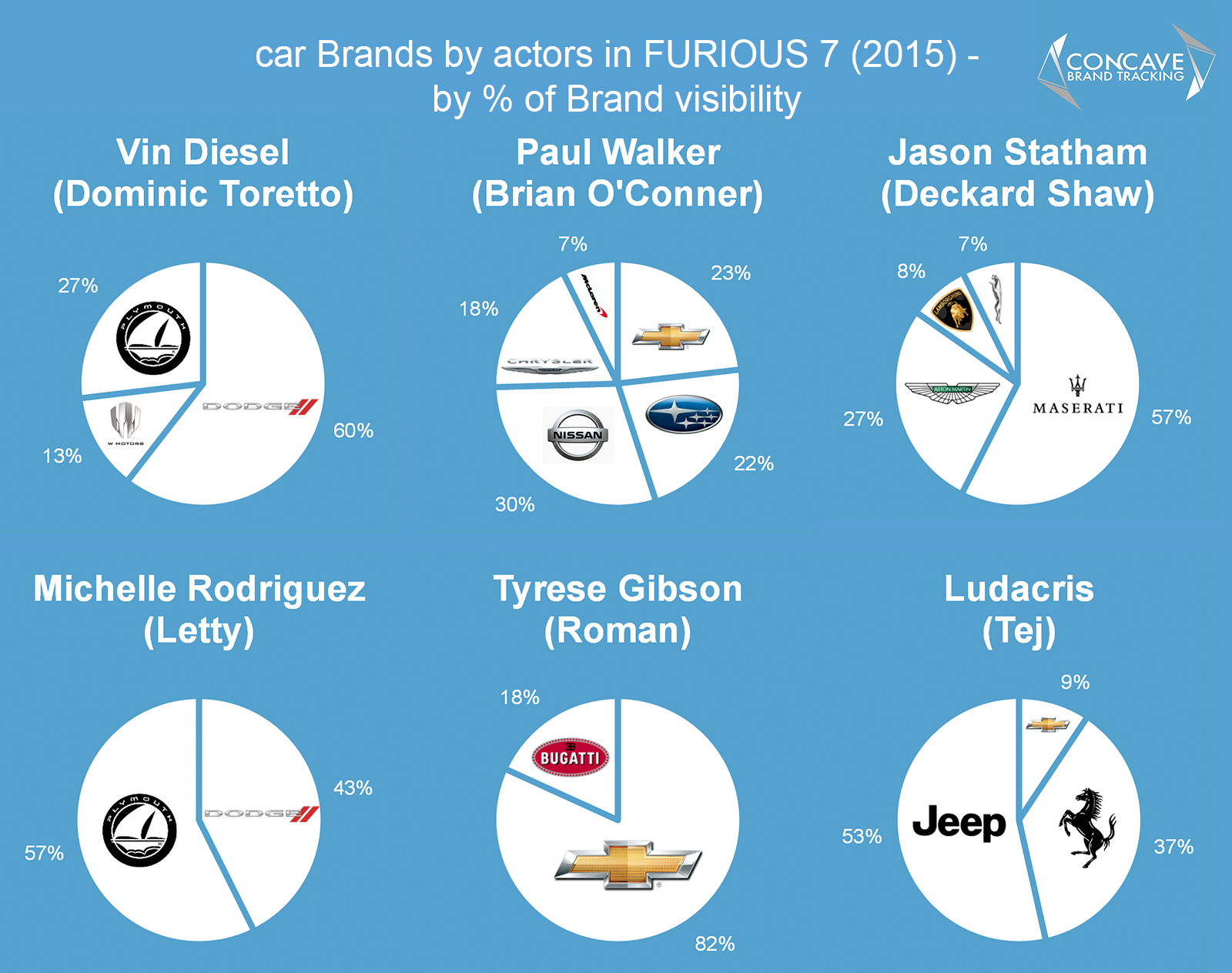