Despite the deep personal significance that Eminem’s song HEADLIGHTS carries, the video contains a number of Brands from his usual Nike trainers to a Dodge Durango product placement.

This article will analyse the Brands that appear in this video and what their portrayal says about them.

The Spike Lee directed music video follows the song’s theme of portraying the current relationship, or lack thereof, between Eminem and his mother, Debbie Mathers. The video, which is partly shot in POV, shows an ageing woman living in poverty, desperately attempting to see her son, whom she is reminded of on TV, in photo albums and even by random people who bare slight resemblances to him. When not being turned away by the guards of her estranged son’s gated community she is seen drinking and smoking in her small run-down house. The video has a strong theme of poverty, which is polarised in contrast to Eminem’s wealthy lifestyle of which we get a glimpse at the end.

Debbie Mathers’ poverty-stricken lifestyle is partly conveyed through scenes of her driving a very sad looking 1999 Honda Civic and eating very simple food, including Sara Lee Honey Wheat bread. However the Honda logo is not seen in any visible manner and the Sara Lee logo is either blurred or covered up. This is a somewhat negative portrayal of both Brands, but due to their logos not being visible, most people would not notice them.

Smoking and drinking are also prevalent themes, both associated to the mother’s poverty and to emphasize her misery. Fake Brands were used here, namely Okitone cigarettes and Whispes Vodka.

Had these been real Brands they would have carried the similar poverty and misery associations of Honda and Sara Lee as well as the implication of alcoholism. 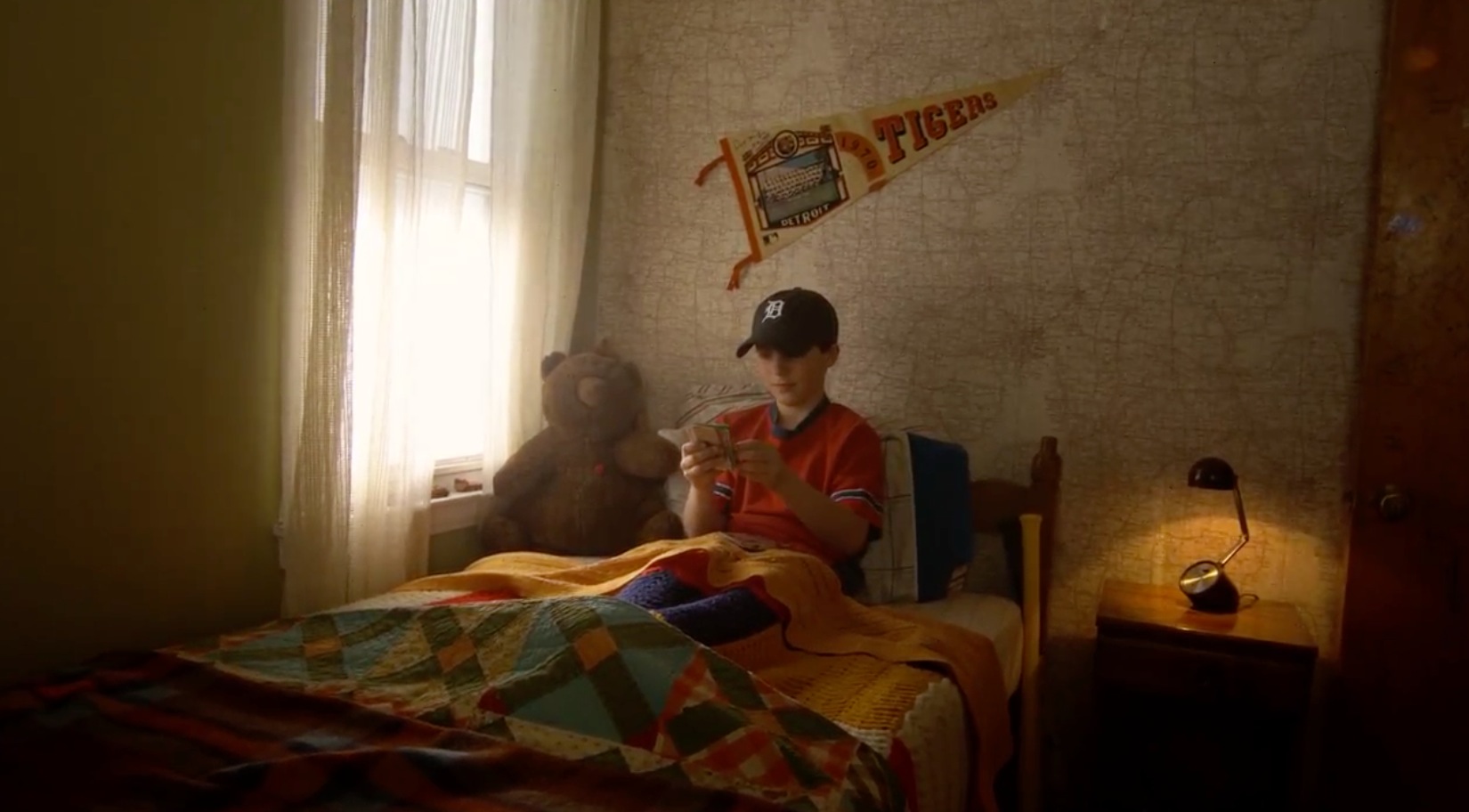 This emphasizes the associations Eminem has with his hometown, which is a corner stone of his personal Brand. He is seen wearing Detroit sports teams clothing in most of his videos.

A photo of Eminem as a teenager, long before his success, shows him wearing a pair of Nike shoes. At another point Debbie Mathers mistakes a stranger for her son due to an implied resemblance to Eminem from behind. He is dressed in a jacket, hood over his head and on his feet… a pair of Air Jordan I, which bare the very recognizable Nike swoosh. Finally, when the real and present Eminem appears at the end, whilst discreet, one can make out that he is wearing a pair of Nike Air Max shoes.

This depiction of Nike, as a Brand that has been with Eminem since his childhood days in poverty but remains with him today in his life of fame and luxury, is one of strong Brand loyalty by Marshall Mathers and broad socio-economic appeal. Furthermore the fact that a pair of shoes with the Nike logo make a random person look like Eminem implies that they are a “trademark” of his; much like the Brooklyn Nets cap (previously a New York Yankees one) is for Jay Z, Oakleys were for T-Pain and Converse shoes are for Wiz Khalifa.

This association is of course nothing new, as Eminem has a long history of collaborating with both Nike and Air Jordan as well as wearing their clothing. 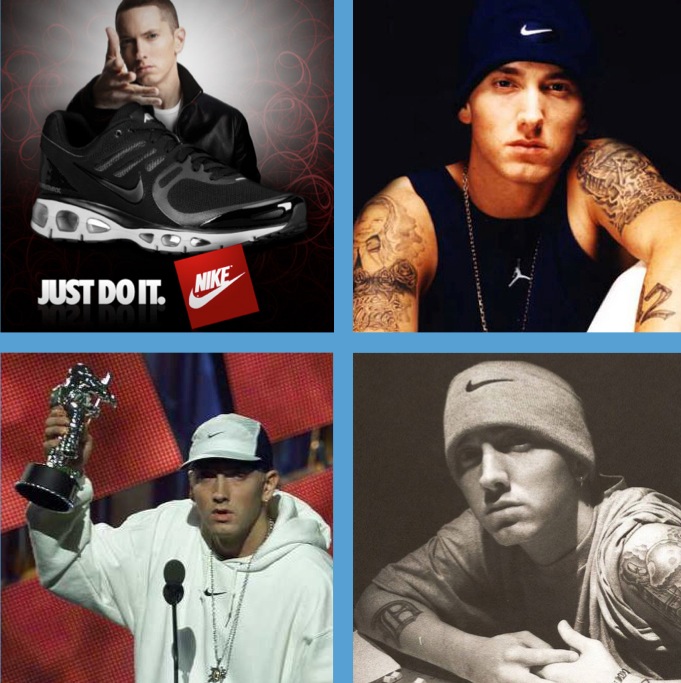 Another Brand that has long had a link with Eminem is Casio, more specifically their G-Shock sub-brand, which has appeard in many Eminem music videos over the past few years.

When Eminem finally sees his mom again and the two of them hug he can clearly be seen wearing a Casio G-Shock GA120-7A. The Brand is associated with Eminem’s sporty and baggy style of clothing, as well as the upscale connotation that comes with being worn by an individual valued at over 150 million dollars. However, the most important aspect of the Casio appearance is that it occurs during the climax of the video, the embrace. This is the shot of the video that is shown in a majority of the many articles about the video. Hence, as well as people seeing the watch in the video, it will undoubtedly get a lot of exposure from people reading about it. 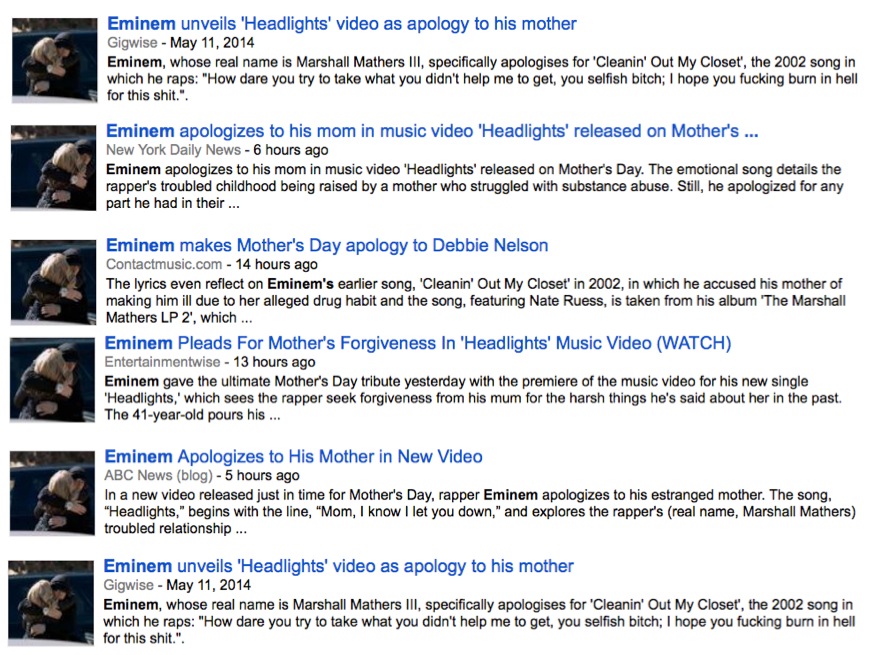 Here is the aforementioned still in higher quality below: 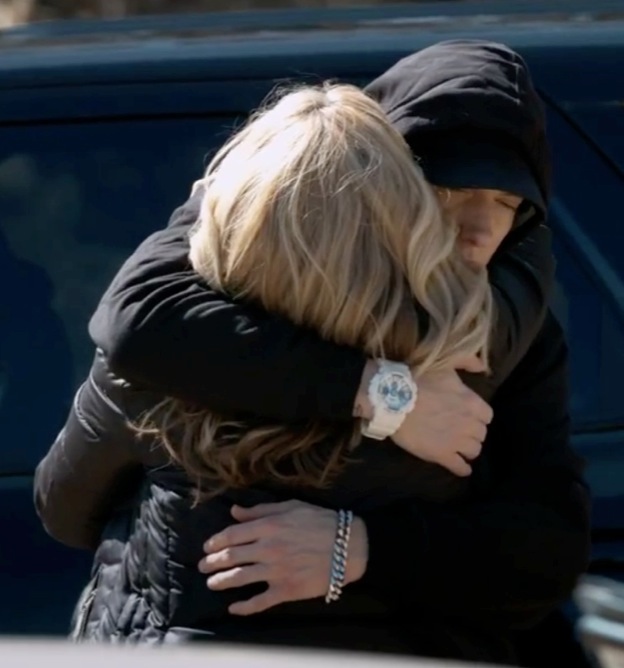 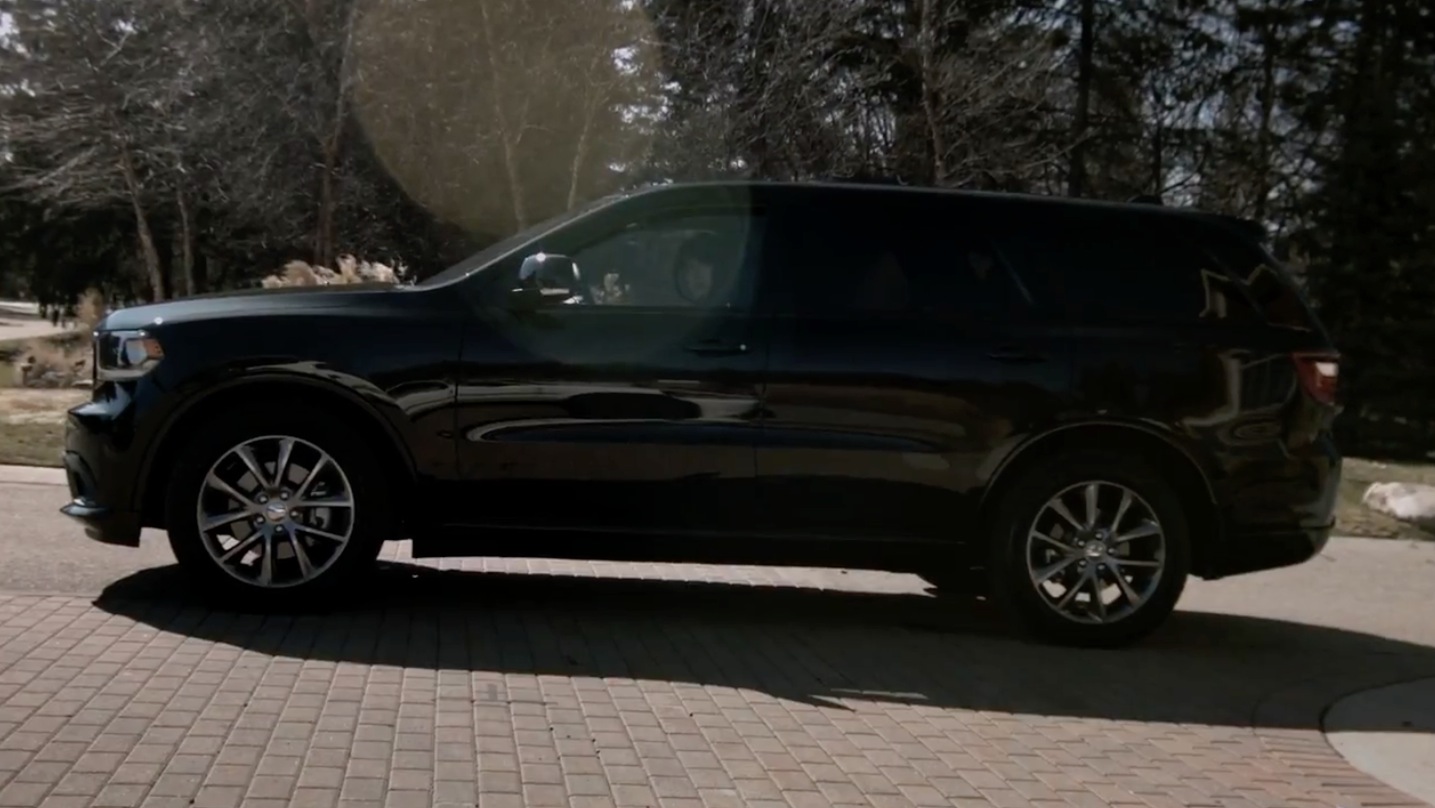 Whilst Nike and Casio may appear in the video due to Eminem’s link to them, the true product placement of this video is the 2014 Dodge Durango driven by the rapper at the end of the video. If there was any doubt that there was indeed a commercial incentive to feature this particular vehicle, the 2 second close-up below makes it clear. 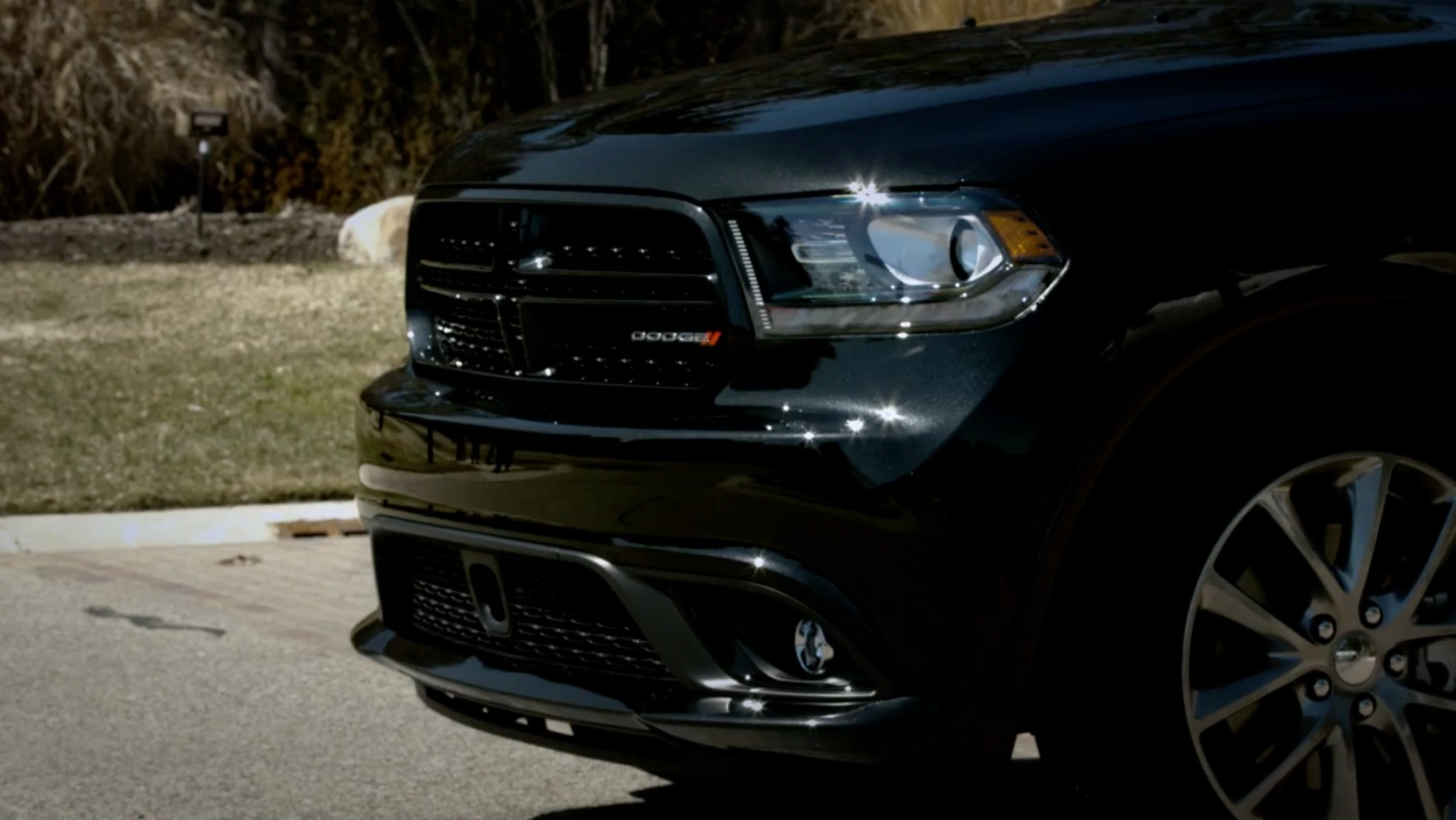 The use of the Dodge SUV by Eminem as he exits his exclusive and highly guarded gated community undoubtedly positions the vehicle as high-end, but also as sporty and cool as the rapper exits it in a Champion hoodie and Casio watch.

The Chrysler Group LLC Brand will get quite a bit of visibility as this video will undoubtedly get tens if not hundreds of million of views. Although, it does risk being overlooked due to the emotional importance of when it appears. People may not pay much attention to what car Eminem is driving as they approach the emotional climax of the video.

It is worth noting that this placement conveys the Durango quite differently from when it was being sold to us by Ron Burgundy: 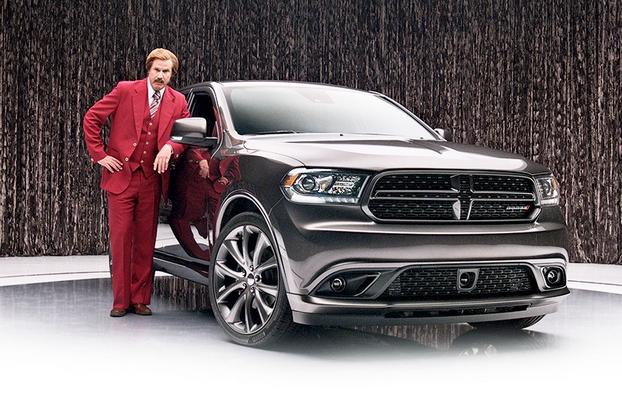 To see more Brands that appear in Eminem’s music videos check out our dedicated Pinterest board: