HOUSE OF CARDS has returned for its fifth season and, as we have done for the last few years (2015, 2016), Concave Brand Tracking recorded every single Brand that appeared in the Netflix Originals show. From the season opening on with Claire being filmed via a Sony monitor to it closing on a shot of a Blackberry, we found well over 100 different Brands.

Factoring in Brand screen time, product discernibility and logo/name visibility we have ranked the top 10 most visible product placement Brands in season 5 of HOUSE OF CARDS.

SPOILER WARNING: Elements of the plot will be mentioned within the contextual analysis of the Brands and how they tie into the story.

Check out our video summary of this article

While some of the Brands in this ranking had limited screen time but appeared quite prominently, the first few came in the form of accessories. These were worn by their characters extensively but only occupied a small part of your screen, so you might have missed them. The first such accessory Brand is Cartier which featured in the form of various watches worn by Claire Underwood (played by Robin Wright).

Interestingly, IWC, which was Frank Underwood’s (played by Kevin Spacey) watch of choice all but disappeared in season 4 and remained absent in season 5.

At #9 we find another accessory Brand, Original Penguin glasses worn by Doug Stamper (played by Michael Kelly). The Brand had just under 10 minutes of screen time and often appeared prominently when worn by Doug. While he has worn an array of glasses Brands throughout the years, in season 5 Doug only wears a pair of Original Penguin The Mulligan eyewear.

As such, the Brand is associated with formal wear, government work and politics.

While it doesn’t make this top 10, another Brand highly associated with Doug Stamper is Breitling, his watch Brand of choice going all the way back to season 1.

At #8 we find another eyewear Brand, Moscot. This is Claire’s glasses Brand of choice. While she wore only Ray-Ban optical glasses in seasons 1 and 2, she began alternating between Ray-Ban and Moscot in seasons 3 and 4. Now, in season 5, Ray-Ban is totally absent from the show and Claire Underwood only wears Moscot.

As we noted when discussing Cartier, over the years, Claire has evolved from the head of a charity to a full-fledged politician. Throughout her transition, while the Cartier Brand remained on her wrist, it seems the costume department decided that a change was needed in terms of eyewear.

Many news channels appear in HOUSE OF CARDS. They are used to depict the broader environment and mood of the country and the press as the Underwoods navigate the murky waters of Washington politics. In season 5, these include Fox News, C-SPAN, CNN and MSNBC.

While MSNBC gets just over a minute of screen time, it appears in the form of full screen close-ups with the MSNBC logo clearly visible. MSNBC gets all its screen time from 2 appearances which also promote 2 of the channel’s biggest shows: Morning Joe in episode 5 and The Rachel Maddow Show in episode 11.

These appearances clearly associate MSNBC with political and governmental news but also with the panel format, bi-partisan debate and speculation by experts. This differs with C-SPAN which is more portrayed as a source of live coverage on congressional events or CNN which appears further along in this ranking.

While the Brand continues to be mostly used by Frank and Doug, Claire and her team are also seen using Blackberry handsets as she becomes president. This clearly associates the Brand with the highest position of power in the land along with professional, governmental and political use.

CNN appeared mostly in the form of its TV channel, but its website, microphones and banners also appeared. Unlike MSNBC, that only appeared in 2 different episodes, CNN appeared in 7 different ones. As such, it was portrayed as a versatile news source covering everything from the presidential inauguration to press secretary briefings as well as election night coverage, bi-partisan panels and expert interviews.

After slowly climbing up our ranking over the years to finally occupy the top spot in season 4, Samsung falls back down to #4 in season 5. This is the lowest it has been since season 2.

Samsung had over 25 minutes of screen time appearing in the form of products ranging from a virtual reality headset to fridges and microwaves. Mobile phones were Samsung’s main product, making up 40% of its screen time. TVs, laptops and tablets followed.

The character most associated with Samsung was, by far, Leanne Harvey (played by Neve Campbell).

At #3 we find Dell, another series regular which has been among the top 7 Brands across all 5 seasons of HOUSE OF CARDS.

Dell has just under 30 minutes of screen time in season 5. It appeared in the form of monitors, laptops, keyboards, mouses, servers and cardboard boxes.

The character most associated with Dell was Aidan MacAllan, the IT specialist / hacker. As such Dell is mostly associated with technology, professional use, the NSA, spying, video surveillance and hacking.

At #2 we find another Brand you might might not have noticed much but is present in many scenes, Avaya. This is the Brand of telephones that are omnipresent in the Oval Office, other White House offices and its residence as well as congressional offices.

They are most associated with and used by Frank and Claire Underwood and are highly associated with politics, government, professionals use as well as, of course, phones calls and communication.

Avaya has consistently been in the top 10 Brands of every season, but season 5 was by far its biggest to date.

The main characters to use Apple devices were Frank and Claire. They used them mostly in the context of professional government use. 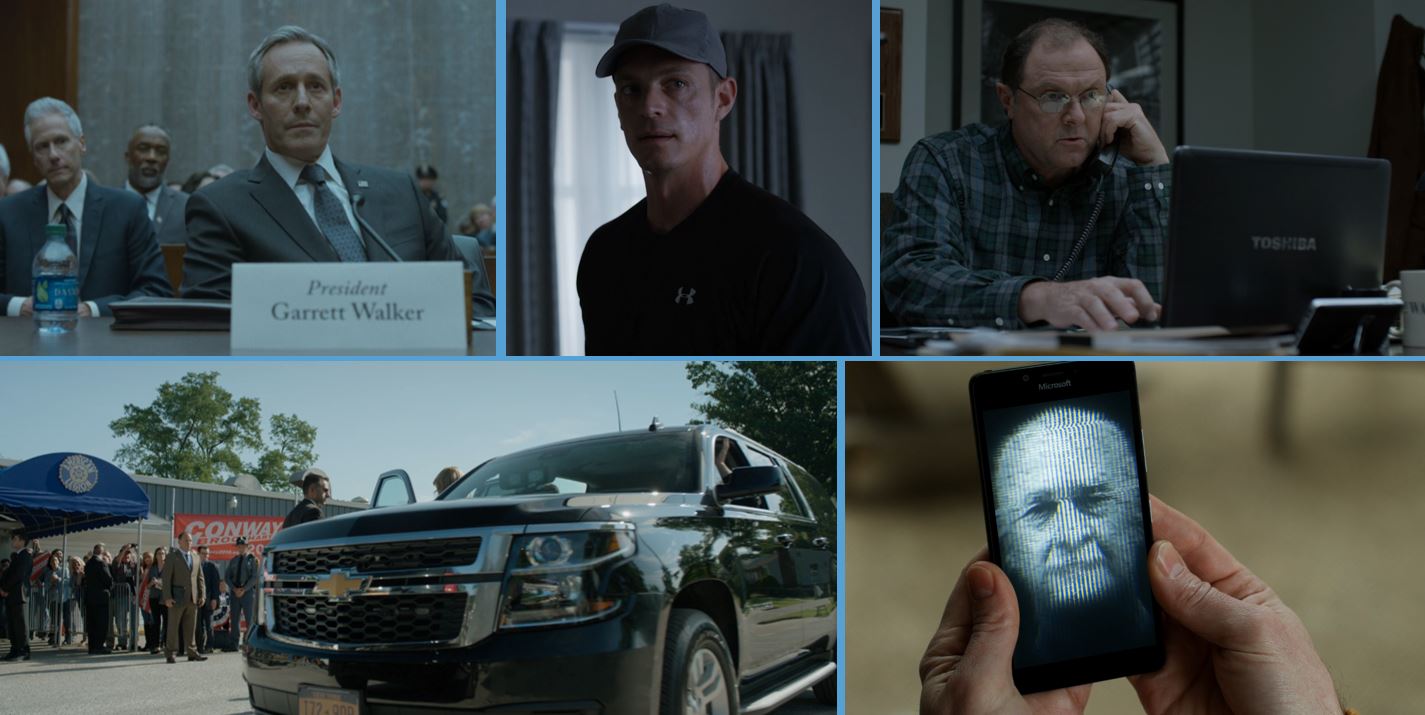