The Netflix original series HOUSE OF CARDS came to an end in 2018, missing its star Kevin Spacey but still featuring many of its staples, such a Robin Wright, its trademark convoluted intrigue and lots of product placement.

In terms of net product placement visibility, season 6 did have less than any other season due to it only being 8 episodes long, while its predecessors had 13. However, once we account for the number of episodes, we find that season 6 was the 3rd most product placement-heavy season of the entire series, behind seasons 4 and 5.

Season 6 of HOUSE OF CARDS had almost 3 ½ hours of product placement with TV channels, mobile phones, telephones and laptops getting the most visibility.

Below, we look at the top 10 most visible product placement brands in season 6 of HOUSE OF CARDS.

In episode 5, ABC and its show This Week got 40 seconds of high-quality screen time with their logos clearly visible. As such ABC / This Week is the 10th most visible brand in season 6 of HOUSE OF CARDS.

Most of Chevrolet’s screen time came in the form of government Suburbans used to transport and protect the President of the United States. This associates the brand with professional and government use as well as security and convoys.

MSNBC got 45 seconds of screen time in episode 5 which was its only appearance in season 6. While this is less than in seasons 2,3 and 5 it is enough to make MSNBC the 8th most visible brand on season 6.

MSNBC appeared in the form of its show THE LAST WORD WITH LAWRENCE O’DONNELL in which the host discussed a political story with a guest.

Fiji Water had over 7 minutes of aggregated screen time. Their bottles often appeared in conference rooms during meetings.

This associated the brand with professional and government use as well as politics and meetings.

Avaya telephones have been one of the most consistent – albeit discreet – staples of HOUSE OF CARDS. In season 6, Avaya had almost 19 minutes of screen time, which is far more than in seasons 1 or 2 despite those having more episodes.

Avaya phones were seen mostly in the Oval Office, the White House residence, Air Force One and other government buildings. This associated Avaya with professional use, government and politics. Claire Underwood (played by Robin Wright) was by far the character most associated with Avaya.

CNBC and its show Squawk Box appeared in episode 8 for almost 2 ½ minutes of high-quality visibility.

We are shown a journalist interviewing Bill Shepherd (played by Greg Kinnear) regarding his thoughts on President Claire Underwood.

After being the top brand in all but one of the previous seasons (it was #2 in season 4), Apple falls to #4 in the final season of HOUSE OF CARDS. This is due to Apple’s screen time dropping to under 10 minutes. In contrast, Apple’s second lowest season in terms of screen time is season 3 in which it had almost 23 minutes.

In S6, Apple appeared mostly in the form of laptops, phones and tablets.

The two characters most associated with Apple were Claire Underwood and Annette Shepherd (played by Diane Lane).

We find CNN at #3 overall and as the most visible TV channel due to highly visible appearances in episodes 2 and well as subtler ones in episodes 1,5 and 6.

CNN is shown as a news source that features live coverage of events, breaking news, interviews and discussion panels.

While every other Brand on this list appeared in the form of a single core product, Samsung accumulated over 14 minutes of screen time in the form of fridges, tablets, laptop, phones and TVs. Once we equate the shorter season, this product placement visibility is more than Samsung achieved in any previous season.

Seth Grayson (played by Derek Cecil) is the character most associated with Samsung in S6. He is seen using Samsung laptops, phones and TVs.

Despite S6’s brevity, Blackberry had more screen time than in any previous season with over 18 minutes. As such, Blackberry was the most visible brand of S6 and accounted for 55% all mobile phones.

Most major characters used BlackBerry phones to call or text in S6 including Claire Underwood, Doug Stamper (played by Michael Kelly), Mark Usher (played by Campbell Scott), Bill Shepherd and many more.
As such, the BlackBerry brand was heavily associated with communication, politics, government and professional use. 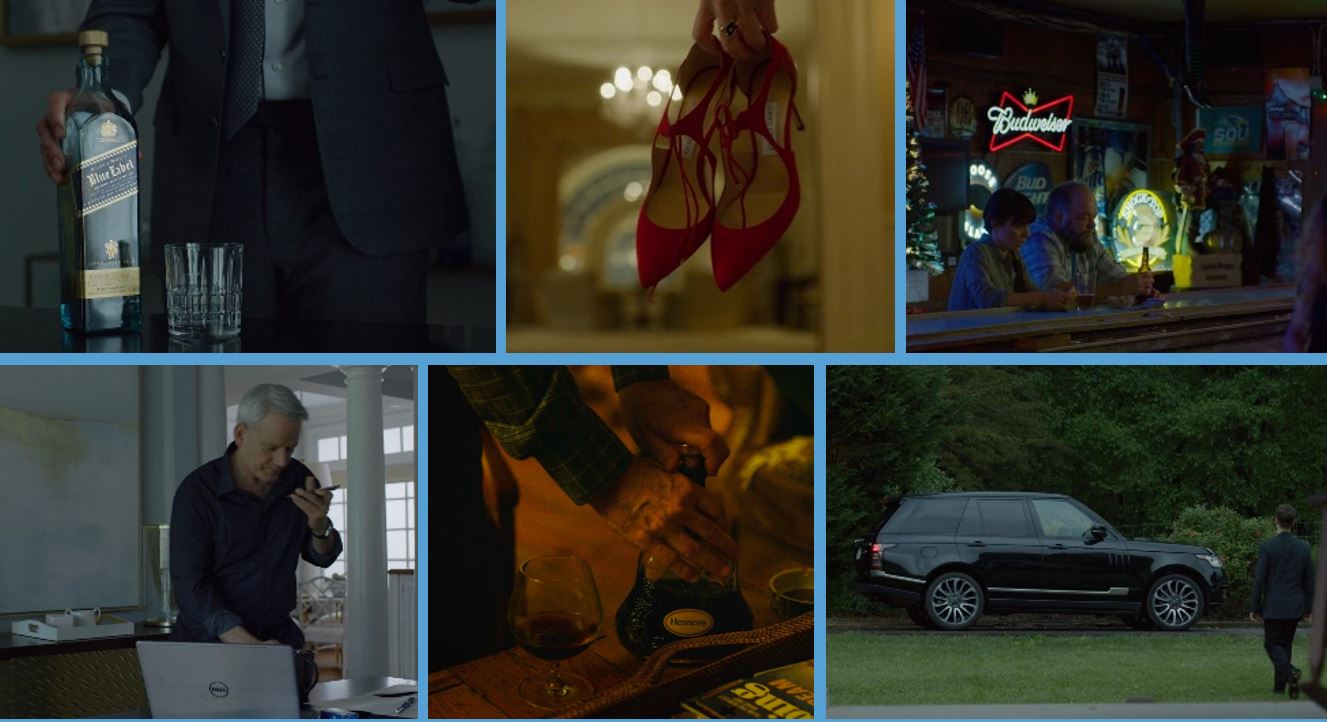