HP & Fiat in SPARK THE FIRE by Gwen Stefani

Much like in BABY, DON’T LIE – in which Puma, Beats by Dre and Beats Music featured – we find clear cases of product placement, namely for HP and Fiat.

Gwen Stefani’s association with HP is nothing new. It goes back as far as her first solo single in 2004, WHAT YOU WAITING FOR. The video features an HP laptop, camera, TV and printer, all shown in an obvious way.

In the video for Gwen Stefani’s 2005 hit HOLLABACK GIRL, HP appeared again in the form of a limited edition camera designed by the artist herself.

HP did not appear in the music videos for Stefani’s 2nd album, Great Escape in 2006, but her association with the Brand was not over.

In 2007 Gwen Stefani partnered with HP for a global marketing campaign promoting their printers. 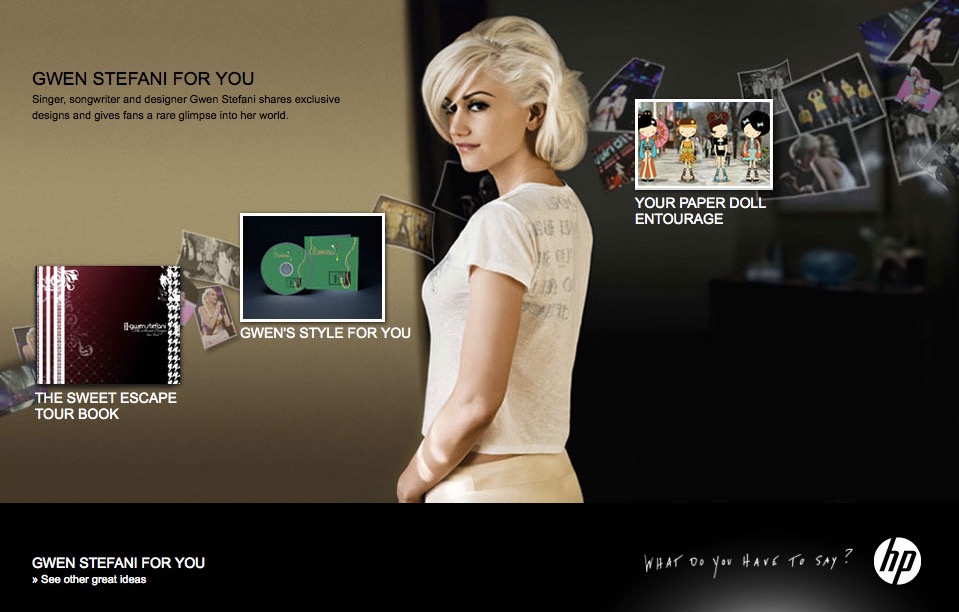 The campaign even involved a TV commercial starring the singer:

https://www.youtube.com/watch?v=-FhiIV6srJ0
From 2008 to 2013 she focused on her family and her band. As her solo career was put on hold, so was her association with HP. But now that Gwen Stefani is back, so is the partnership.

This time it is not a camera, laptop, TV or printer that is being promoted through her music, but a 3D scanner-equipped desktop computer.  The HP Sprout is very clearly shown for almost 10 seconds of screen time in SPARK THE FIRE.

As well as creating Brand and product awareness, the video showcases the “fully functional creative workstation” as it is used to make a 3D scan of a slice of pizza. 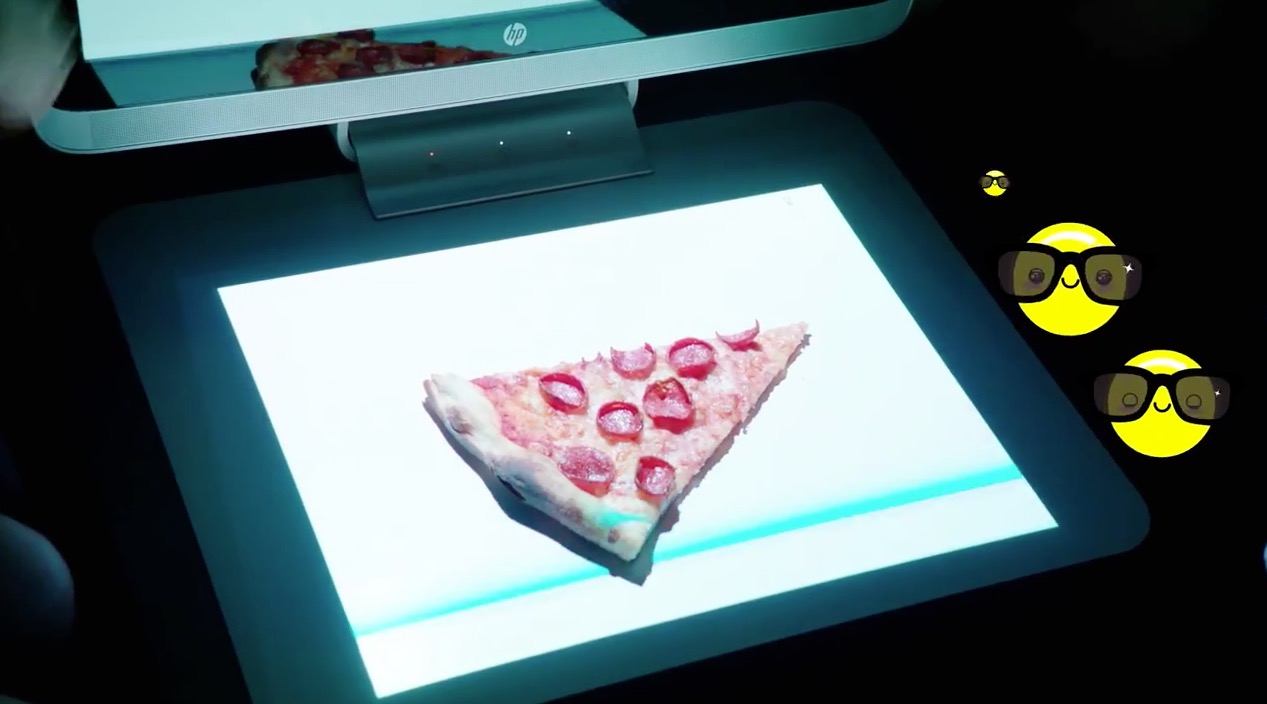 Interestingly, the “unique machine” is not directly associated with Gwen Stefani herself, but rather with a group of young white individuals, and in a house party environment. This is all a clear indication that their target audience is younger than Mrs. Stefani, who is 45 years old.

This product placement by HP follows that of their Slate 8 Plus tablet in Iggy Azalea’s BLACK WIDOW earlier this year.

See our article on HP in BLACK WIDOW.

While Gwen Stefani is not directly associated with HP, she is very much so with the other Brand in SPARK THE FIRE, Fiat. 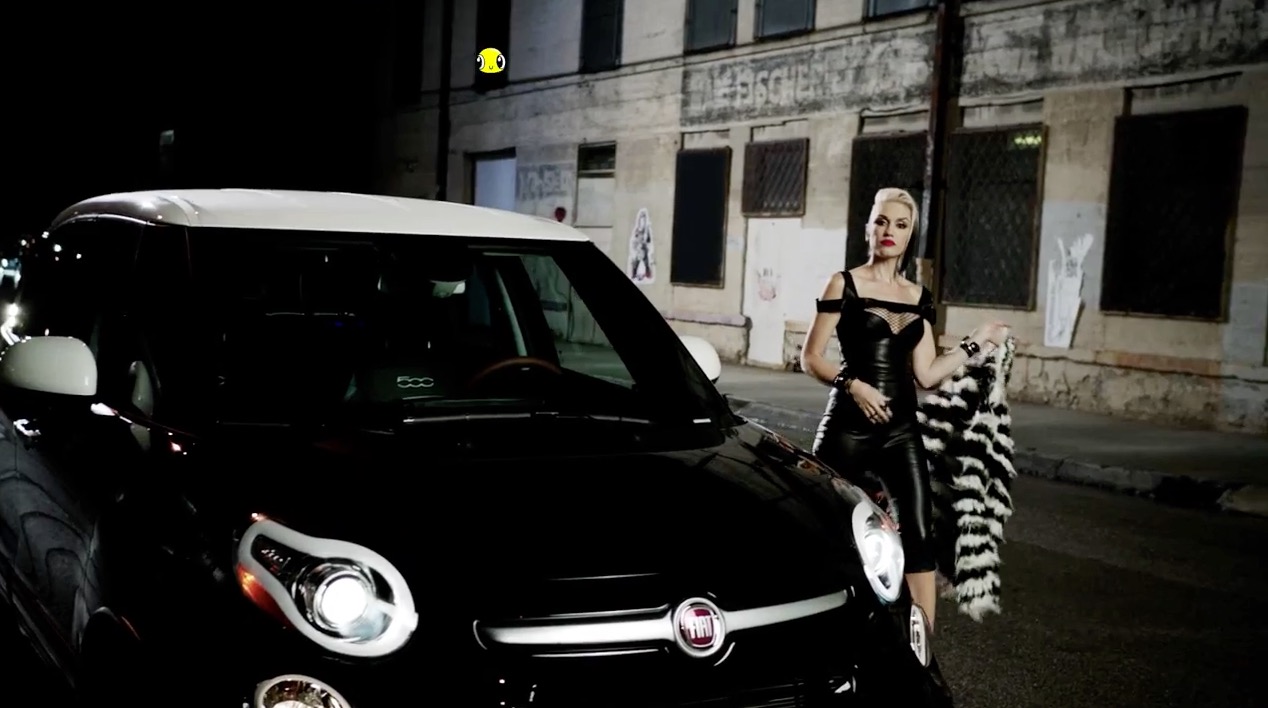 The artist is shown in evening attire, at night, in a city street posing with her 2014 Fiat 500L.

In this appearance, the Fiat car is portrayed as a cool and glamorous vehicle, great for a night out on the town. Furthermore, having Gwen Stefan directly associated with the Brand indicates that the target demographic of this product placement is white women in the 30s-50s age range.

This is the first time Fiat has been associated with Gwen Stefani, and while it is not a particularly common car Brand to appear in music videos, it does pop up in a very visible way every now and again.

In both cases, Fiat was associated with the female lead artists, much like we have now with Gwen Stefani.

These examples of past videos in which Fiat has appeared have accumulated over 100 million views each. It will be interesting to see whether Gwen Stefani can provide Fiat with similar exposure. Her previous video BABY, DON’T LIE only received 8 million views since its release a month ago, and none of her videos have ever garnered more than 50 million views.

According to a recent Billboard article, the product placement of Fiat in SPARK THE FIRE fits into a larger deal between Interscope Records and Fiat Chrysler Automobiles. As part of this deal the Gwen Stefani/Fiat association goes further than just this product placement, with the SPARK THE FIRE song being used in Fiat commercials.

Other product placements in the larger deal include Dodge in Eminem’s GUTS OVER FEAR and Chrysler in Fergie’s L.A.LOVE.

Finally, though Gwen Stefani has been consistent in her Brand association with HP when it comes to electronics, this is not the case with cars.