Whilst Katy Perry’s new music video is set in ancient Egypt, it quickly becomes evident that it will not exactly be historically accurate. Amongst the hydraulic chariot and hieroglyphic sunglasses worn by Juicy J, the fact that most characters are wearing trainers is not too much of a stretch.

Indeed, from the start of the video Katy Perry, aka Katy Pätra, is surrounded by tall blue-painted guards all wearing Diadora MI Basket II shoes. 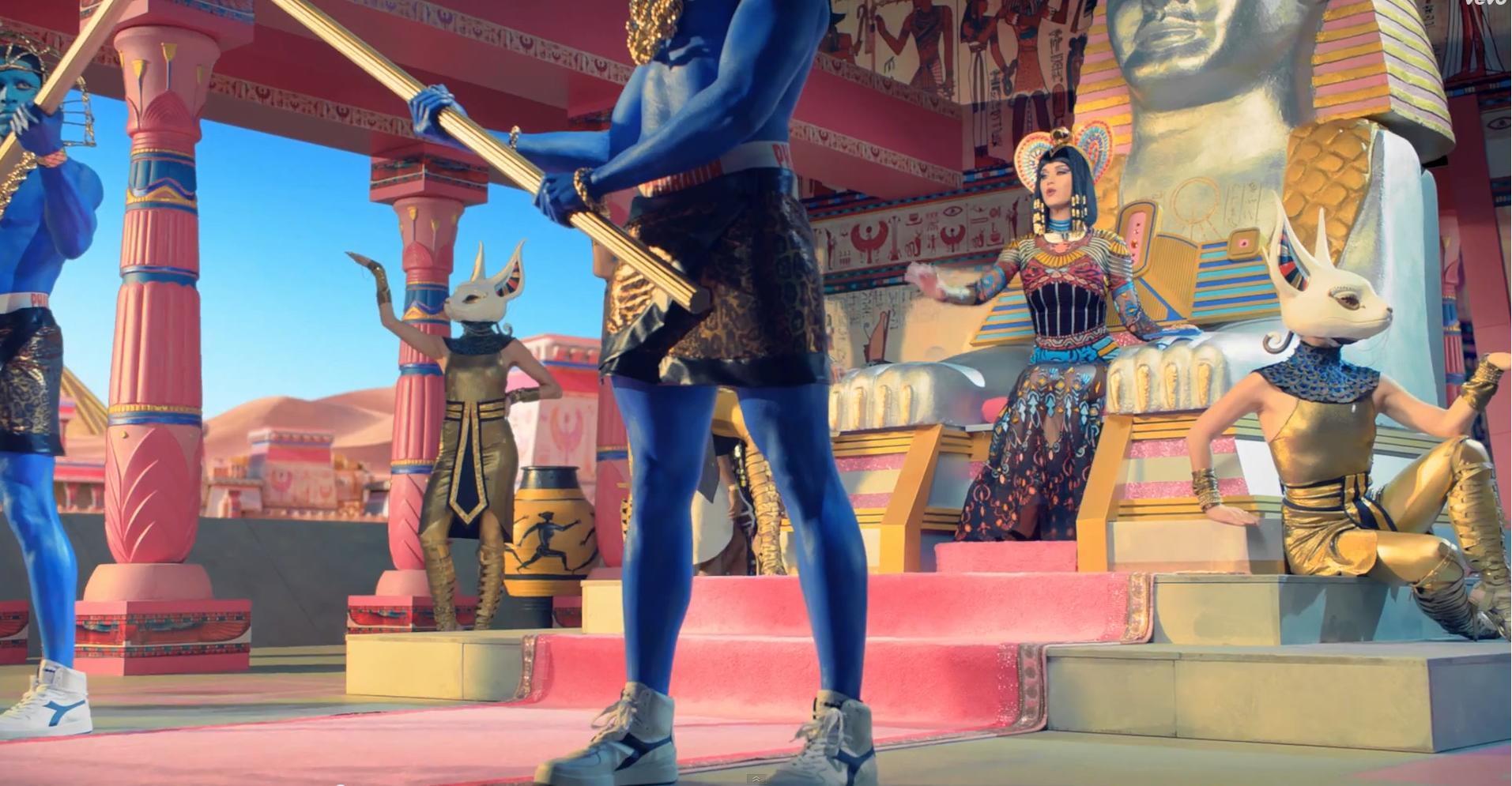 Whilst initially these are rather discreet their visibility increases and remains throughout the video. They stick out largely due to how unconventional they appear in the ancient Egypt setting. This depiction of these shoes portrays them and the Diadora Brand as rather fashionable (whilst they are only guards, their costumes remain quite elaborate and fancy), manly and tough. Furthermore they gain an association to dancing as the guards partake in the video’s choreography.

Later on we get the pleasure on seeing Katy Perry pole dancing in a pair of Diadora Kim W Lure shoes. 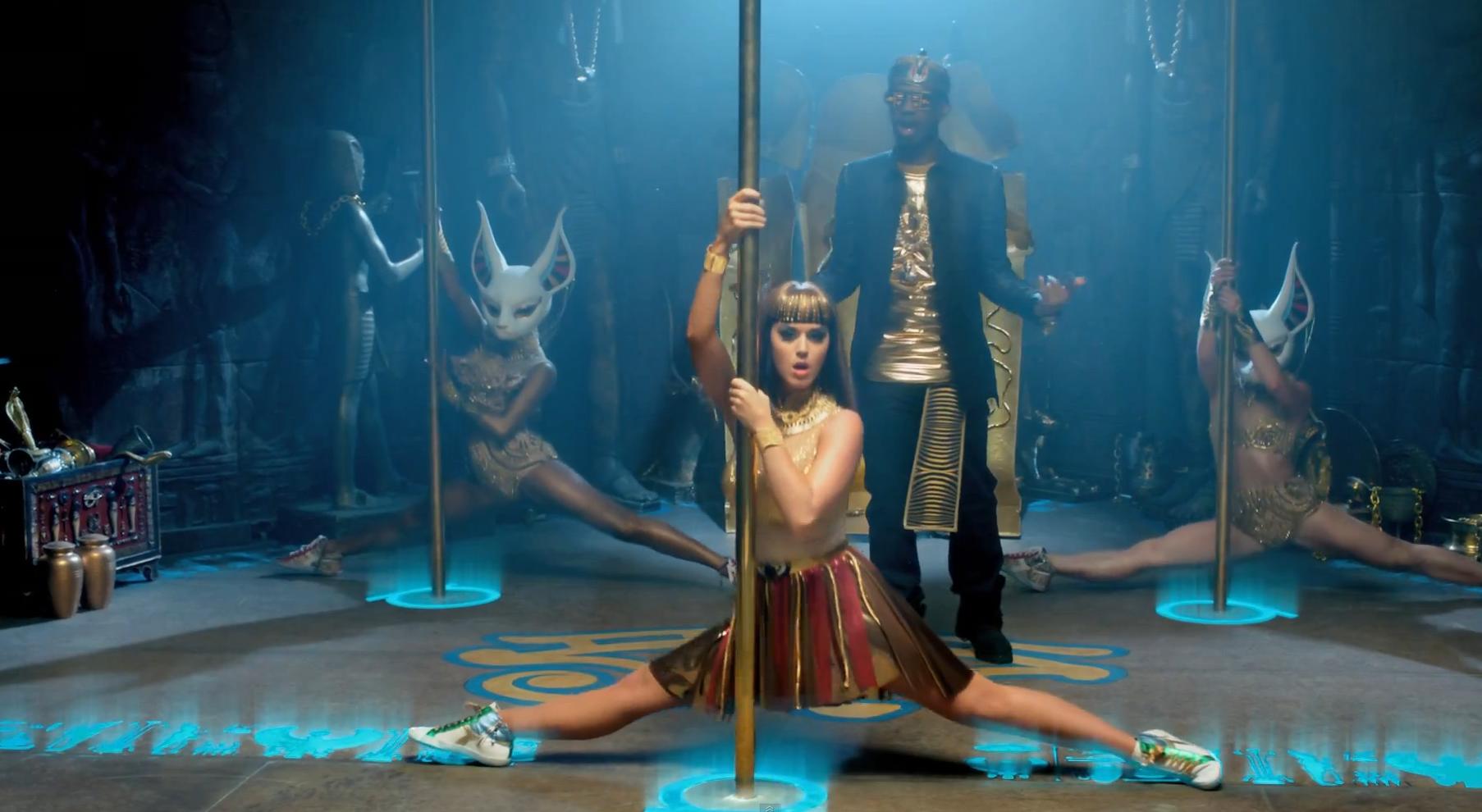 These are on screen for a much shorter period than the MI Basket II (4 seconds vs 22 seconds) but are flaunted much more visibly in a close-up.  A viewer who is not paying much attention may not see the guard’s shoes but will definitely see these.

Whilst the same Brand as the previous ones, these model of shoe are portrayed as feminine, cool, sexy and once again fashionable.  The fact that Katy Perry is meant to be portraying queen Cleopatra also implies a sense of luxury.

Overall Diadora totals 28 seconds on screen of which one second is a close up and the rest discreet sightings. The Brand sees itself associated both with the tough looking blue male guards, a young muscular black suitor and white, female, 29 year old Katy Perry. By showing the shoes on both genders the Brand enjoy a unisex portrayal whilst also seemingly having a variety of models which range from tough to sexy.

This is a strong integration of the Diadora brand and with the video having garnered over 18 million views in its first 72 hours it will be seen by hundreds of million of people in the next couple of weeks and the song still tops the Billboard Hot 100.  The only weakness here is that whilst the Italian Brand‘s logo/pattern is clearly shown, the name is not, hence anyone who does not recognise the shoes or the logo will not know what Brand it is.

This placement was clearly a collaboration between Diadora and Katy Perry as the video quickly made its way onto the sports manufacturer’s home page as well as onto their Twitter feed. 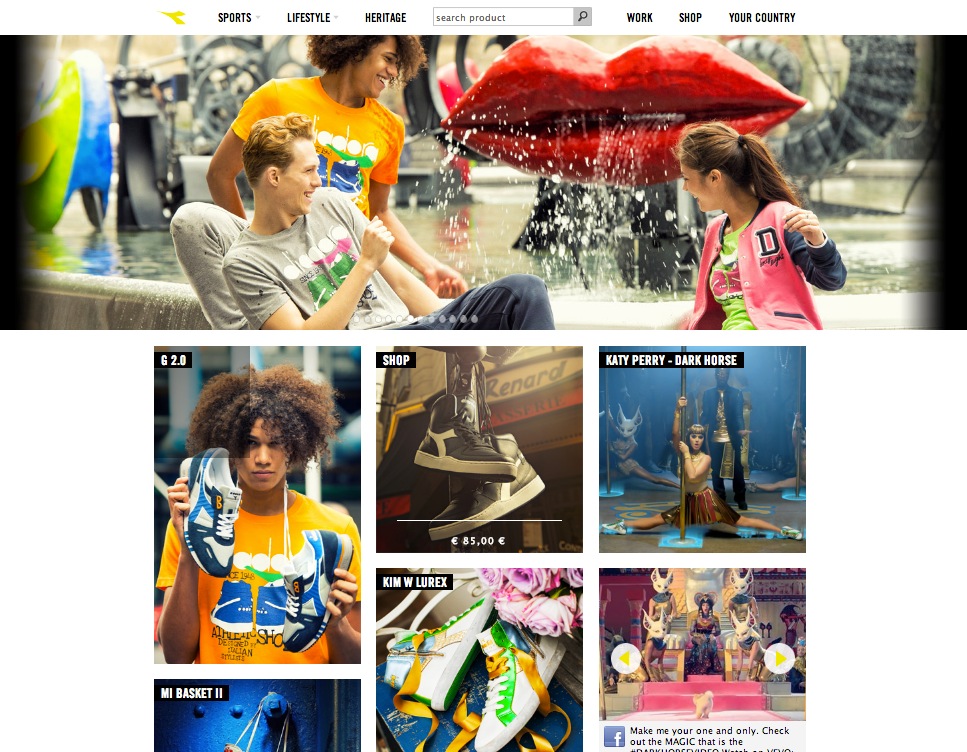 This appearance occurs not long after the release of Enrique Iglesias’ music video I’M A FREAK which shows the Spanish-American wearing a pair of Diadora at a raunchy house party. 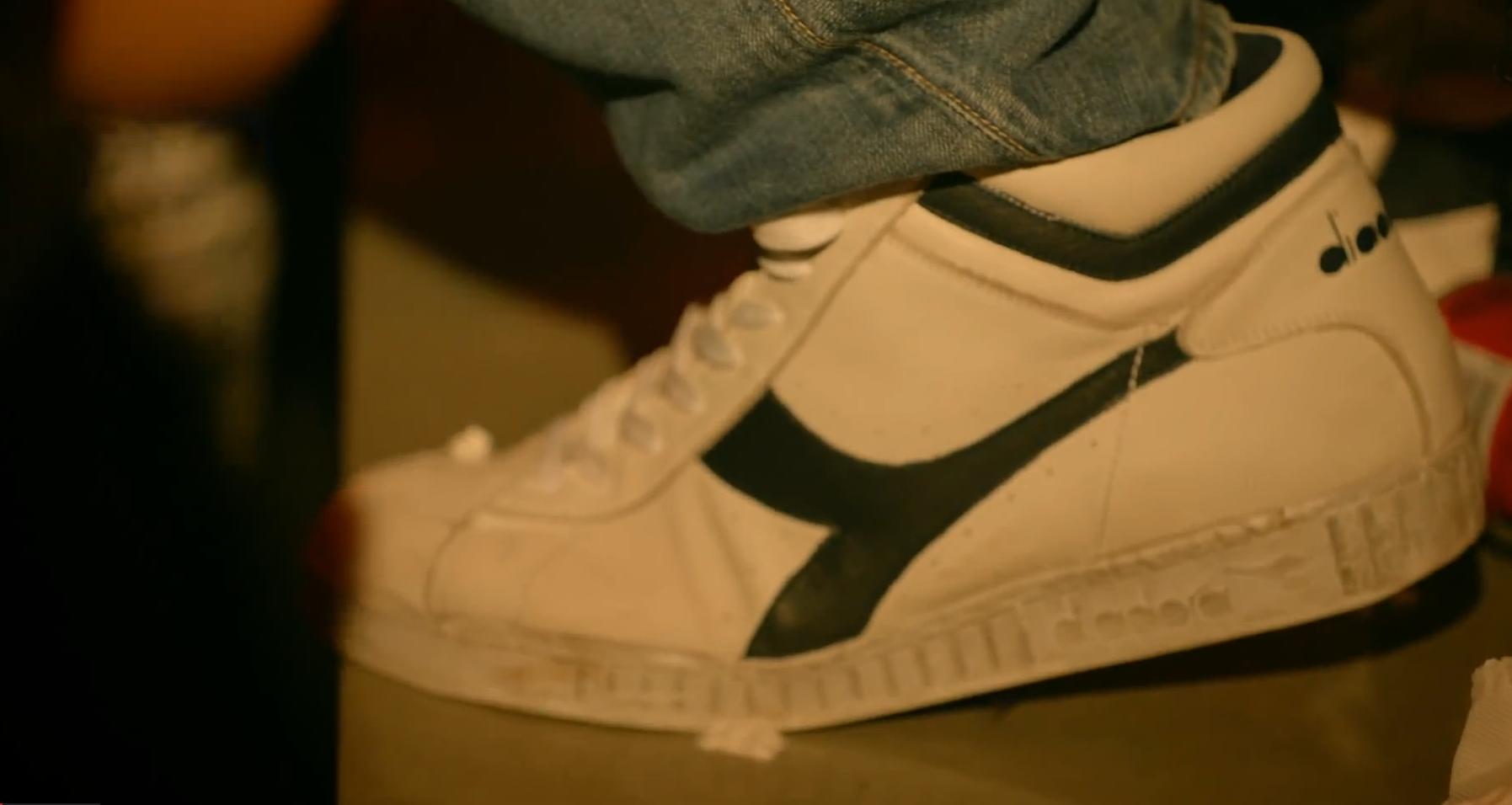 This placement was again a collaboration as this tweet makes clear:

Diadora is a relatively unknown Brand in the casual sneaker market, unlike Nike or Adidas, who between them (including Air Jordan in Nike) accounted for 51% of footwear sightings in 2013 music videos (see graph below). However, these two placements are evidence of a strong push by Diadora to grow in the leisure footwear market and it will be interesting to see if they keep appearing in other music videos throughout the year. 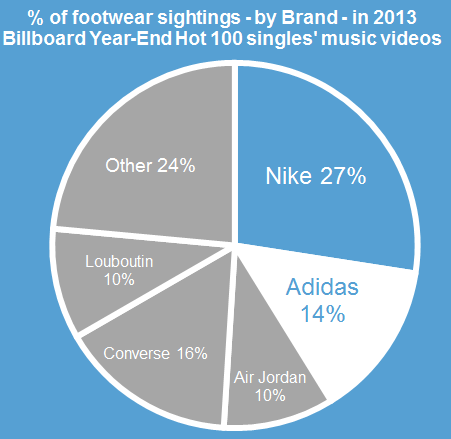 Other than Diadora no other Brands make any appearance in this video, with the Exception of Maybach Music Group whose logo is seen on the chain of one Katy Pätra suitors.  As we could find no link between Rick Ross’s label and anyone involved in this song, it can be assumed this is a diss of sorts, as the characters wearing the chain is shown as being sleazy and promptly turned to dust by Katy Perry’s character.

Whilst Katy Perry is clearly not one to shy away from Brand integration, with the exception of Diesel – which featured in two different videos – Mrs Perry never displays obvious brands in multiple videos, hence this will most likely be the one and only time she is associated with Diadora.