Land Rover and Bentley in THE PINKPRINT MOVIE

In promoting her newly released album – The Pinkprint – Nicki Minaj has released a short movie/music video, THE PINKPRINT MOVIE presented by Beats by Dre. While the 16 minute video is indeed “presented by” the newly acquired Apple subsidiary, their products do not appear in it. Rather, the main Brand appearances are by 2 upscale car manufacturers. Check out the video here:

Nicki Minaj drives 2014 Land Rover Range Rover Sport as she cruises through the city, receiving 27 seconds of screen time, 2 of which are a close up in which its logo unmistakably shown.

As well as being associated with Nicki Minaj herself, Land Rover is shown being used for casually driving around – or cruising – but is also involved in an accident.

Around the end of the video, Nicki Minaj is seen leaving a formal event in a 2012 Bentley Continental GTC. The exposure is much shorter than Land Rover’s – only 6 seconds of screen time – but its logo is also visible. This time however, Minaj is not associated with Brand as she is merely a passenger. Her male companion, Willy Monfret is the one to drive the car.

Furthermore while the Range Rover was associated with cruising, the Bentley car is associated with luxury. This association comes from the fact it is brought by a valet at formal event and both its passengers are in formal attire.

If we consider all videos for Billboard Year-End Hot 100 songs going back to 2003 we find that Bentley appeared in the 9th most videos and Land Rover the 11th most. Hence, they have had very similar amounts of exposure through the years.

In terms of associated individuals the chart below looks at the age and genders of those associated with a selection of upmarket car Brands. 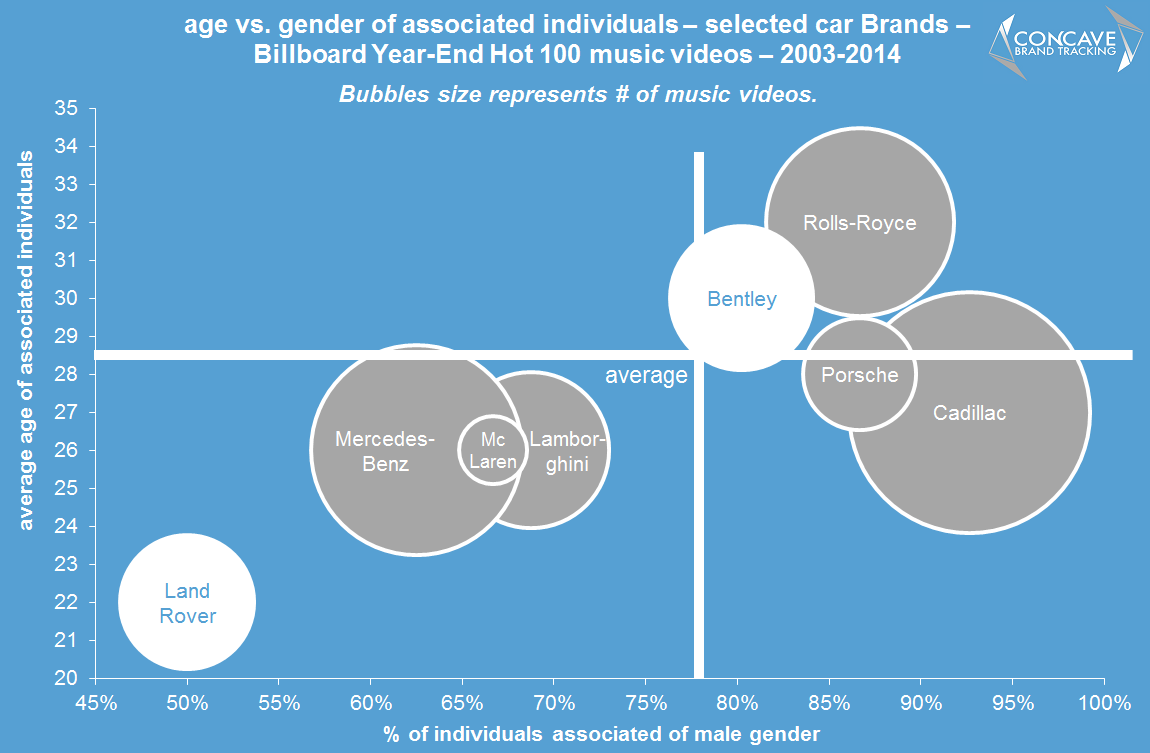 If we consider Land Rover first, we clearly see that it is much more often associated with females than any other selected Brand. Hence, its association with Nicki Minaj fits well with its previous gender demographics. However, at 32, Minaj is much older than the average age of 22 for previously associated individuals. These included 16-year-old Jibbs in CHAIN HANG LOW (2006) and 18-year-old Bow Wow in LET ME HOLD YOU (2005) and LIKE YOU (2005).

As for Bentley, being driven by 32-year-old male Willy Montret closely fits with previously associated individuals. On average they were 30, and 80% were males.

As the graphic below shows, the 2 main associations portrayed in THE PINKPRINT MOVIE are consistent with what has been observer over the past 12 years for bot Bentley and Land Rover.

Indeed, in 64% of the screen time Bentley has had in music videos – for Billboard Year-End Hot 100 songs from 2003 to 2014 – it has been associated with luxury. Only Rolls-Royce was portrayed as such more often.

As for Land Rover, while it was only associated with cruising in 17% of its screen time, this was more often than for any other of the selected Brands.

Whether you work at a global Brand or write about them, do not hesitate to contact us at info@concavebt.com if you would like to learn more about our methodology, data or the services we provide.