Concave Brand Tracking combed through FORD V FERRARI (2019) recording every recognizable brand that featured, as well as how visible the products were, whether or not their logos were visible and how long they were on screen.

With this exposure data and the fact that that the movie was seen by 24 million viewers in theatres worldwide, Concave Brand Tracking estimates that FORD V FERRARI generated nearly 56 million dollars in product placement value for the whopping 145 brands that appeared.

In this report, we will first see how FORD V FERRARI (2019) compared with other brand-filled movies in terms of brand visibility and total marketing value.

We will then look at the 10 most visible brands in FORD V FERRARI, ranked by the amount of product placement value they received in the movie.

Two elements drive a movie’s product placement advertising value: the exposure a movie offer brands, and how many people see the film.

In terms of visibility, FORD V FERRARI provided brands with more of it than any other movie Concave Brand Tracking has ever analyzed. This means a single viewer will see more brand exposure in FORD V FERRARI than in any other film. This is driven by the number of brands, their screen time, how visible their products are and whether or not logos are visible. 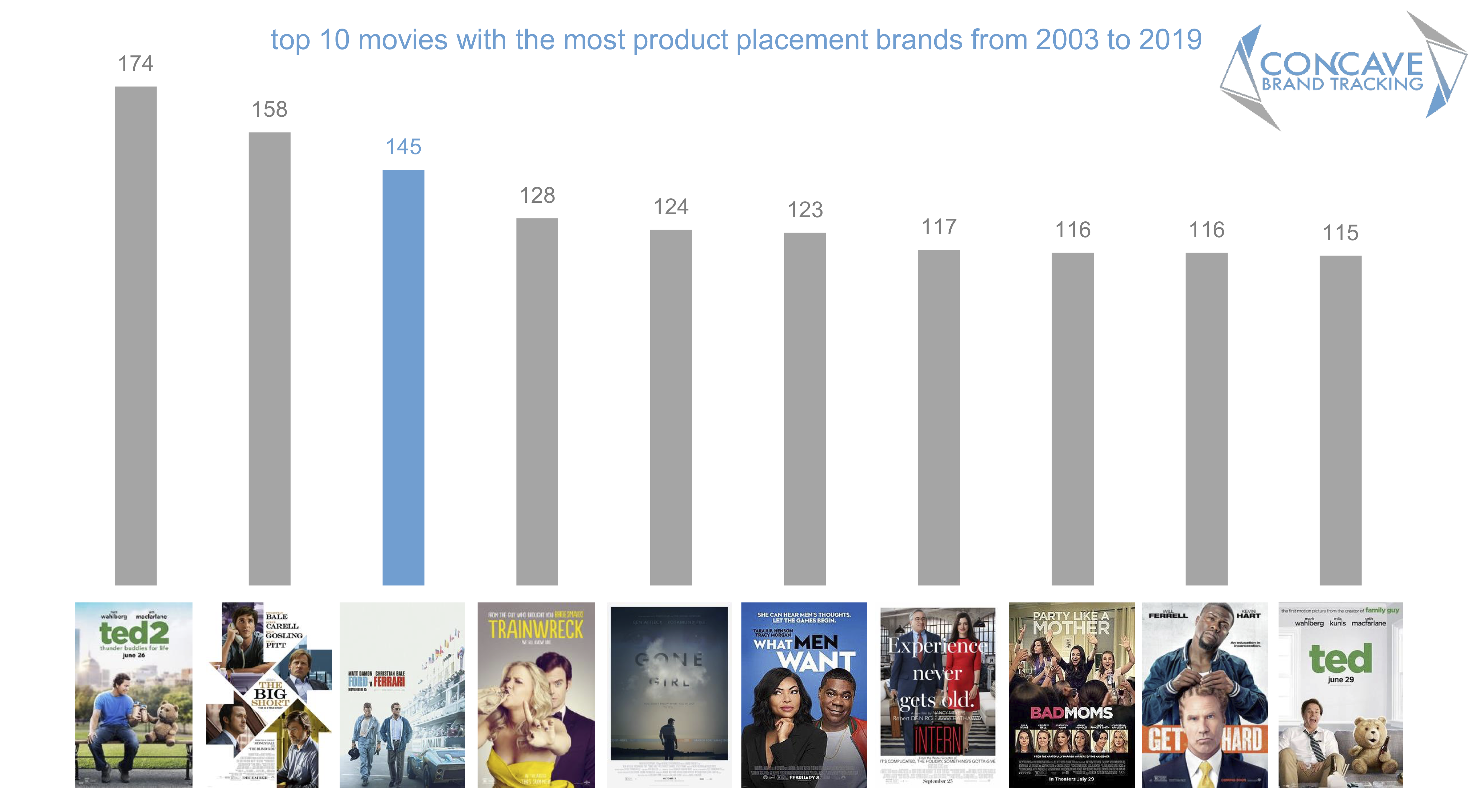 As this chart shows, FORD V FERRARI had 20% more visibility than the second most brand-filled movie we have ever analyzed, which was STRAIGHT OUTTA COMPTON (2015). We then find CREED (2015), THE LEGO BATMAN MOVIE (2017) and KINGSMAN: THE SECRET SERVICE (2014). Most of these movies are either sports movies or comedies, which are the most product placement-filled genres of movies.

While the number of brands is only one metric that drives total visibility, it is notable that FORD V FERRARI featured 145 different brands. This is the third most different brands Concave has ever recorded in a movie, with our records going back to 2003. Only TED 2 (2015) and THE BIG SHORT (2015) had more brands. They had 174 and 178, respectively. 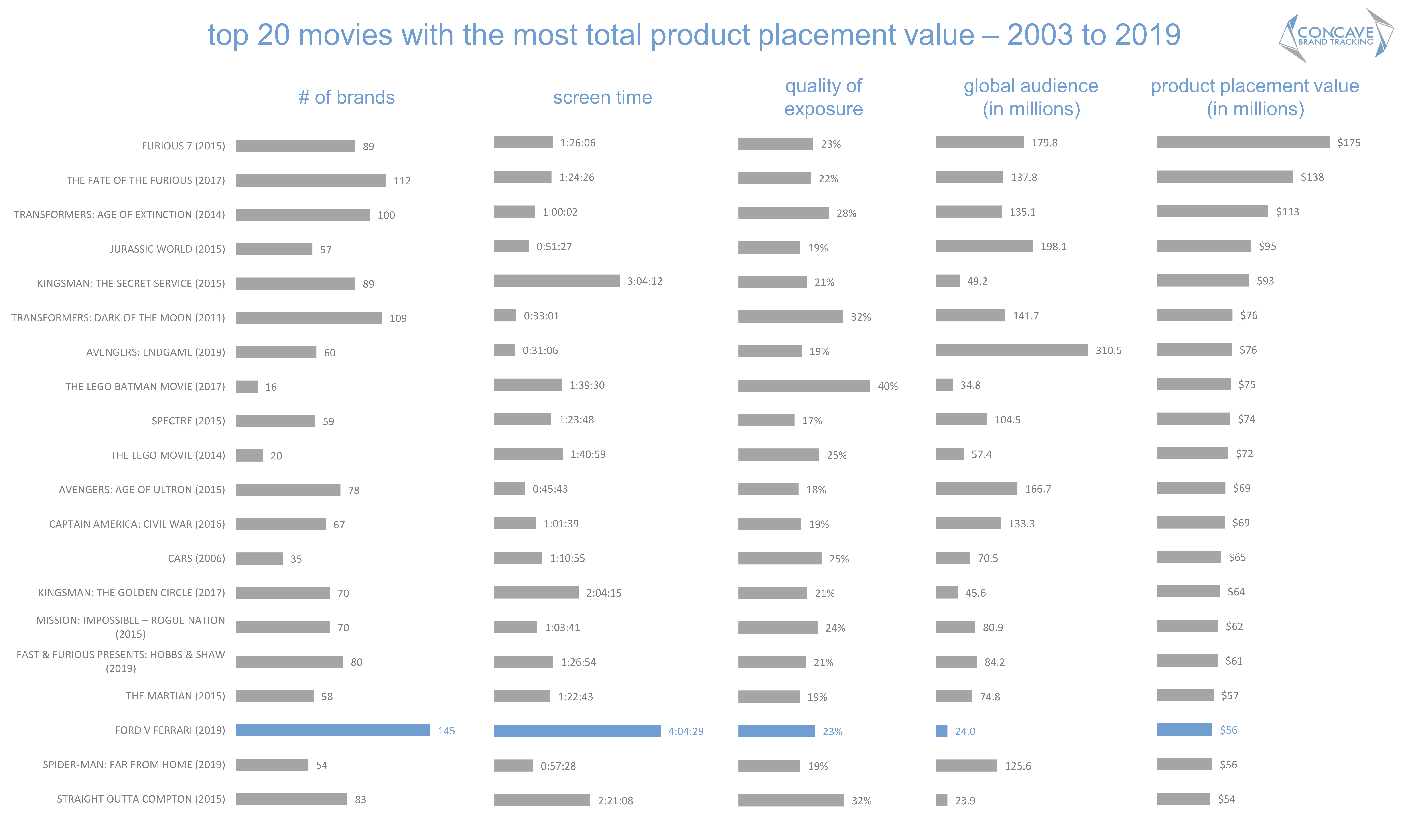 FORD V FERRARI provided brands with the 18th most total product placement value since Concave’s records began in 2003. As the variable breakdown below shows, its value was driven by the sheer number of brands it featured and the resulting screen time. It had the second smallest theatrical audience of any movie on this list. 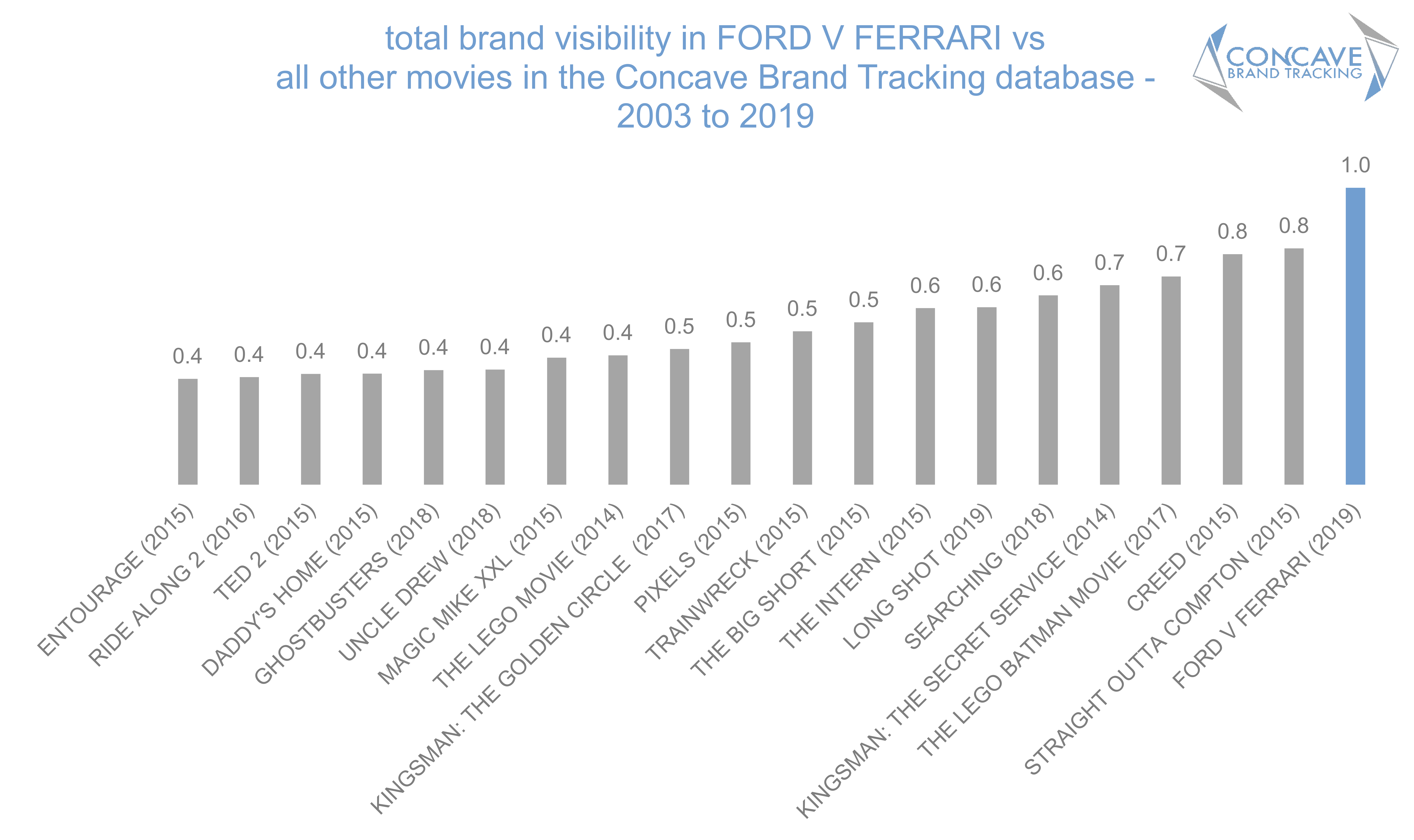 You can also check out our video for this article:

Chevrolet appears in FORD V FERRARI as Ford’s main commercial competitor. It is mentioned in the dialogue as such both by Henry Ford II in his pep talk at the beginning and by Ken Miles when insulting the 1965 Ford Mustang.
Beyond the mentions, Chevrolet vehicles had six and half minutes of screen time in FORD V FERRARI. Most of this came in the Willow Springs race scene.
In it, Christian Bales’ character, Ken Miles, races against teams of C1 and C2 Chevrolet Corvettes.
A Chevrolet Bel Air, two Chevrolet Chevy IIs and three Chevrolet Impalas also make appearances throughout the movie.
All in all, this exposure was worth $973,000 for Chevrolet.

Chevrolet is consistently one of the most visible brands in entertainment and was #5 on Concave Brand Tracking’s 2018 list of the top 100 brands in movies.

FORD V FERRARI is packed with racing-related products and brands ranging from oils and spark plugs to toolboxes. Hence it should come as no surprise that an array of tire brands also feature. While Goodyear is not the most visible tire brand in the film (see #7), Goodyear did beat out BFGoodrich, Firestone and Michelin and crack the top 10 most visible brands in FORD V FERRARI. Furthermore, Goodyear is shown as the tire of choice for the Shelby American racing team that the movie centers on.

The brand gets nearly four and a half minutes of screen time both in the form of tires but also signs at the various races and jackets worn by both Christian Bale and Ray McKinnon. This exposure was worth a total of one million dollars.

Dunlop just edged out Goodyear to be the most visible tire brand in FORD V FERRARI, with 1.3 million dollars in product placement advertising value.

However, Dunlop did not appear much in the form of actual tires. Rather, most of its exposure came from its signage at Le Mans, most visibly the Dunlop bridge. The brand also appeared as a toy used by Noah Jupe, as well as the sponsor for the Ford team at Daytona and for Ferrari’s team in the final race.

Dunlop is a less frequently spotted brand in entertainment than Goodyear or even BFGoodrich. It has, however, made small appearances in MISSION: IMPOSSIBLE ROGUE NATION (2015), THE PURGE (2013) and in another racing movie: RUSH (2013).

Two sunglasses brands made this top 10. The first was Ray-Ban, worn by Christian Bale throughout the movie. The model is 4089 Balorama according to SunglassesID.com.

Ray-Ban had over five and a half minutes of screen time and had its logo visible in 46% of this. This exposure was worth just under 1.6 million dollars in product placement value and associated the brand with professional driving as well as with one of the movie’s stars.

Ray-Ban is one of the most frequently spotted eyewear brands in entertainment. In 2018, it was the 23rd most visible brand in movies overall, and the second most visible glasses brand. In 2019 alone, Ray-Ban has appeared in many blockbuster films, including ONCE UPON A TIME IN HOLLYWOOD, FAST & FURIOUS PRESENTS: HOBBS & SHAW and AVENGERS: ENDGAME.

While Ray-Ban did benefit from having its logo visible, Entourage of 7 had more value with over 12 minutes of screen time and was the most visible eyewear brand in FORD V FERRARI. Indeed, Matt Damon wore a pair of Beacon-1020 shades by Los Angeles-based manufacturer, Entourage of 7 for most of the movie. He wore them in nearly every outdoor daytime scene. The one exception was a part of the movie when he wore a pair of Spectaculars Benjamin sunglasses instead, but this brand had less than two minutes of screen time. Overall, Entourage by 7’s placement in FORD V FERRARI was worth 2.3 million dollars in exposure.

Concave Brand Tracking has never recorded Entourage of 7 in a movie before. This is likely due to the brand being fairly young (established in 2007). However, Michael Douglas wears the same model as Matt Damon in the
Netflix TV show, THE KOMINSKY METHOD. 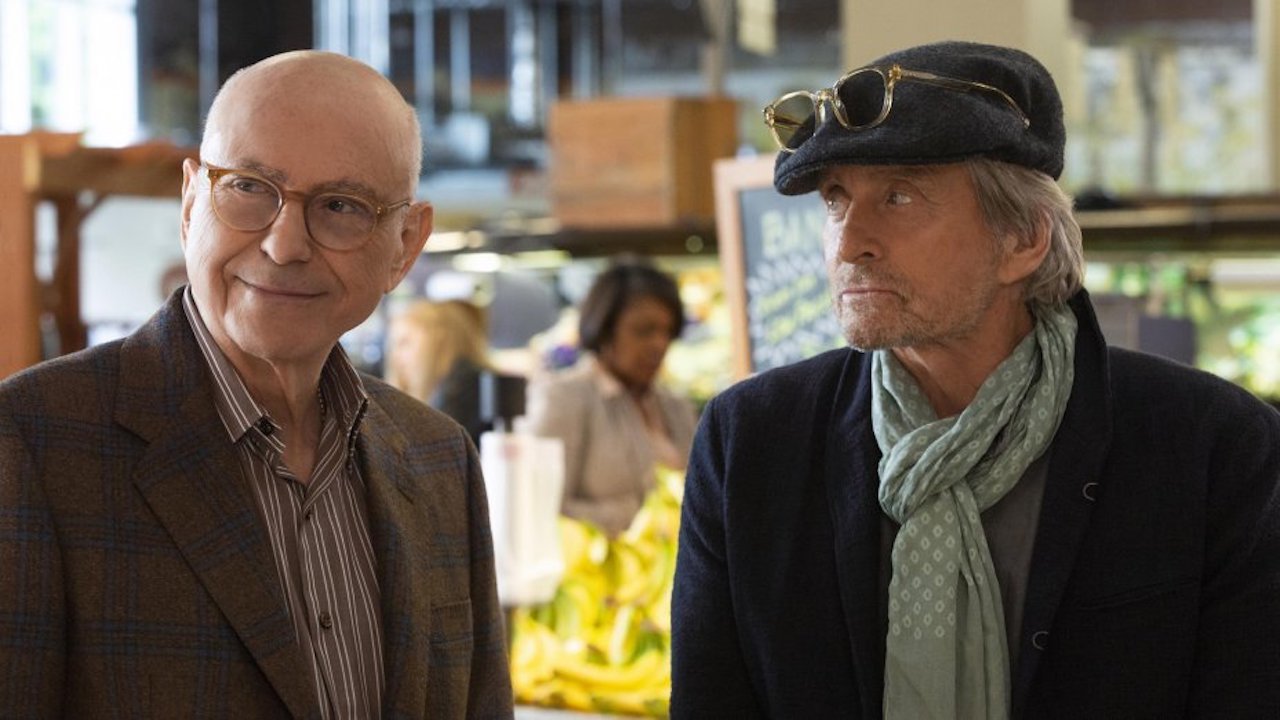 Throughout FORD V FERRARI, Christian Bale wears Bell Helmets while racing. Much like Ray-Ban, it benefits from lots of screen time as it is visible whenever the actor is shown driving. However, Bell edges out Ray-Ban as it got more screen time and had its logo visible in 91% of it.

As such, this appearance is worth 2.9 million dollars for Bell Helmets, as well as associating the brand with professional driving, racing, winning and Bale himself.

While not a common brand in entertainment, Bell Helmets has made appearances in major movies such as DADDY’S HOME (2015) and RUSH (2013).

While Shelby American gets exposure unique to its brand, the Cobra car is a collaboration between Carroll Shelby’s eponymous company and British car manufacturer AC Cars. As such, anytime Cobra related products are on screen, it counts as exposure for both brands.

In this way, AC got 1.5 million dollars in advertising value from being in FORD V FERRARI.

While AC Cars rarely appear in movies, it has notably featured in many music videos for major artists. This includes BOYFRIEND by Justin Bieber (2012), PAYPHONE by Maroon 5 (2012) and FIVE MORE HOURS by Chris Brown (2015).

Unsurprisingly, both titular brands appear near the top of this top 10. What is less expected is, however, that Ferrari did not make the top two.

The Italian car manufacturer racked up nearly 14 minutes of screen time, mostly at the beginning and the end of the movie. It appeared in the form of a factory, paperwork, pins, signs, uniforms and, of course, cars.

Ferrari also had its logo visible in 61% of its screen time and was mentioned repeatedly in the dialogue. This resulted in 4.3 million dollars in product placement advertising exposure.

While Ferrari has never made Concave’s top 100 list, it will undoubtedly do so in 2019 due, not only to its appearance in FORD V FERRARI but also in THE UPSIDE, AVENGERS: ENDGAME and THE HUSTLE.

While much of its visibility came from the various Cobra cars shown in the movie, Shelby American also appeared in the form of signage and uniforms as well as being mentioned in the dialogue.

As such, the brand had nearly 29 minutes of screen time and had its logo visible in 41% of that. Concave values this brand visibility at 6.8 million dollars. The brand is associated with performance sports cars, professional racing, the Ford Motor Company and most of all, Carroll Shelby himself.

While Shelby American has not been in any other major movies in recent years, the storyline of NEED FOR SPEED (2014) revolved around a Mustang that was supposedly another collaboration with Carroll Shelby.

The least surprising brand on this list is, of course, Ford as the number one brand in FORD V FERRARI.
Ford appeared throughout the movie in the form of factories, buildings, signs, news articles, clothing, badges and many cars, including the infamous GT 40. Ford has 45 minutes of screen time and had its logo visible in 38% of it. This, along with the many mentions in the dialogue, gave Ford over 12 million dollars in product placement advertising value.

Ford is one of the most common brands in entertainment. In 2018, it appeared in 75% movies and was the most visible car brand as well as the 3rd most visible brand overall on Concave’s top 100 list. In the 2019 list, Ford will take the top spot thanks to FORD V FERRARI, as well as such movies as AVENGERS: ENDGAME, TOY STORY 4, ONCE UPON A TIME IN HOLLYWOOD, JOKER, GLASS and SHAZAM!. 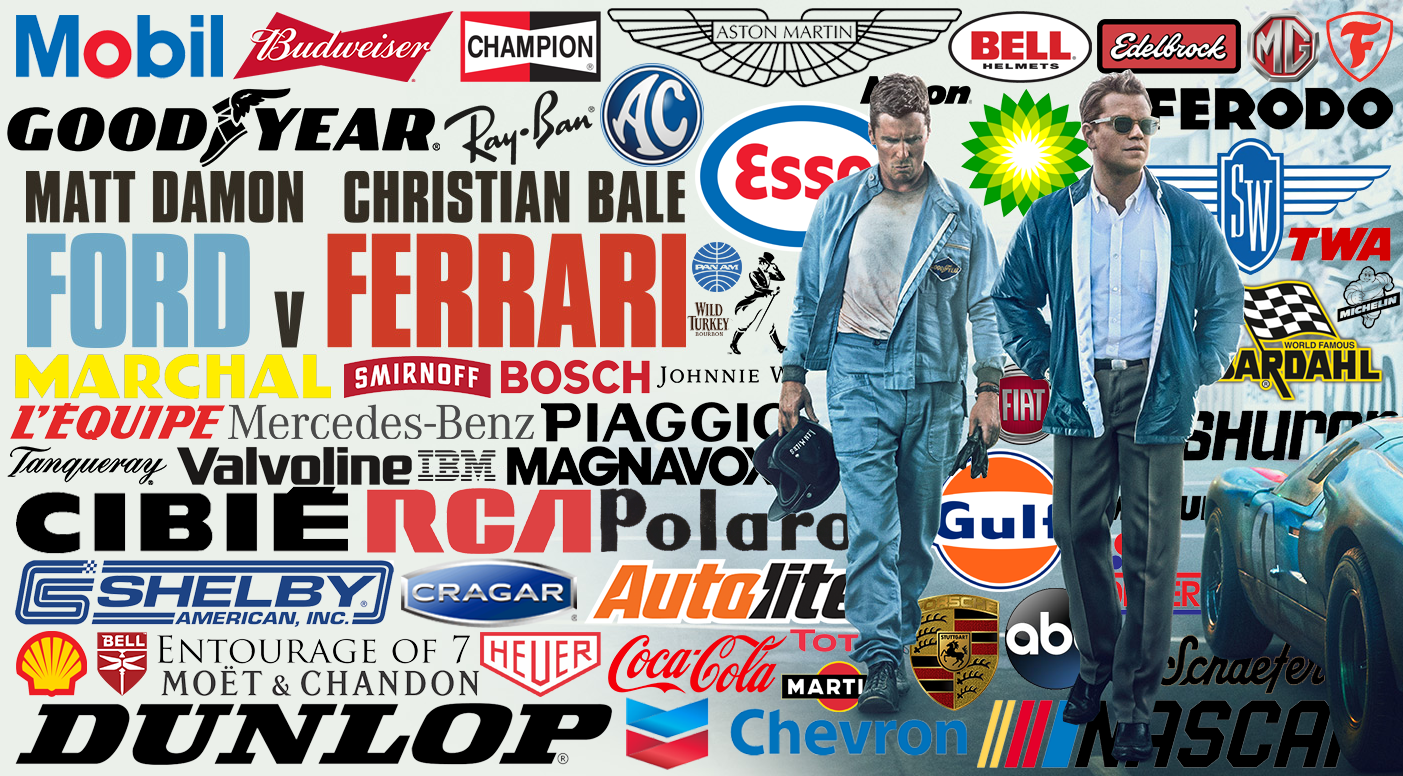