Ray Ban & Cadillac in STEAL MY GIRL video by One Direction

The long-awaited One Direction video for STEAL MY GIRL is out, and while it features no major product placement, Ray Ban and Cadillac make noticeable appearances.

Historically, Niall Horan has been seen wearing a pair of Nike shoes in many of the group’s past videos, for example BEST SONG EVER and WHAT MAKES YOU BEAUTIFUL. While he seems to have hung up his Nike trainers in STEAL MY GIRL, Niall does wear a pair of Ray Ban Wayfarer sunglasses which are clearly identifiable for 13 seconds of screen time. Ray Ban is by far the most visible Brand of sunglasses in 2014, and has ranked in our top 10 of most visible Brands overall in Q1, Q2 and Q3.

Here, Ray Ban sees itself portrayed as cool, fun, casual and is associated with fame as well as being worn outside in the sun. While this last element might seem obvious, most sunglasses Brands that appear in music videos are not worn in sunny environments. For instance, Versace, the 2nd most visible Brand of sunglasses in 2014, is mostly shown worn indoors and never associated with the sun or summer.

Elements of the portrayal of Ray Ban in STEAL MY GIRL fit with previous music video sightings. Indeed, in 63% of 2014 Ray Ban sightings it has been portrayed as cool, and in 25% it has been associated with fun.

Check out our Pinterest board of all Ray Ban sightings in entertainment.

The video co-stars Danny DeVito as the video’s eccentric director who meets the boys in the middle of a desert. He turns up in a 1970 Cadillac DeVille Convertible. The GM luxury car receives 7 seconds of subtle screen time and 7 seconds in the background. Both types of sightings include the Cadillac logo being visible.

Cadillac’s appearance in STEAL MY GIRL follows 12 other videos for songs that charted in the Billboard Hot 100 during the first 3 quarters of 2014. That is the 3rd most videos for any car Brand after Chevrolet and Ford.

However, if we factor in screen time, product visibility, logo visibility and YouTube views, we find that Cadillac is actually the 4th most visible car Brand after Chevrolet, Ford and Dodge in Q3 of 2014. Cadillac also ranked in our top 10 most visible Brands overall in Q1 and Q2 but dropped out in Q3.

In One Direction’s video, though Cadillac does not receive any particular contextual associations, it is clearly associated with Danny DeVito. This is interesting because Cadillac has a history of being portrayed as a rather “old-school” Brand. In videos such WHITE WALLS by Macklemore and Ryan Lewis and WORST BEHAVIOR by Drake, Cadillac vehicles are shown as vintage status symbols and associated with older individuals. This is reinforced by 69-year-old Danny DeVito driving a Cadillac.

Furthermore, the Cadillacs that appear in music videos are mostly older models, as is the case with the 1970 DeVille that appears in STEAL MY GIRL. In fact, only 1 of the 12 videos in which Cadillac has appeared features models more recent than 2000.

The average model year for Cadillac cars appearing in music videos is 1979, while for other luxury Brands such as Mercedes-Benz and Rolls-Royce it is, respectively, 1997 and 2002.

See the chart below for a more detailed breakdown with other selected Brands. 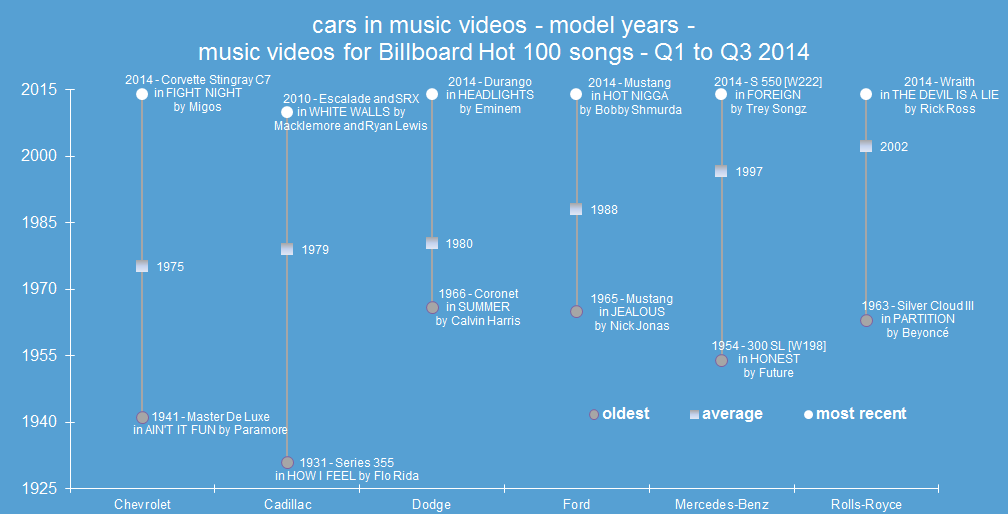 Check out our Pinterest board of all Cadillac sightings in entertainment

Whether you work for a global Brand or write about them, do not hesitate to contact us at info@concavebt.com if you would like to learn more about our methodology, data or the services we provide.