Following their performance together in BAD TEACHER (2011), Cameron Diaz and Jason Segel will reunite on the big screen this summer in SEX TAPE (2014).

The first trailer was recently released and gives us a good idea of the plot, but also the Brand around which the movie revolves. Check it out here:

As anyone who sees the above trailer can tell, this movie will heavily feature Apple computers, laptops, mobile phones and above all, tablets:

The image below shows a still from the trailer where an iMac, MacBook Pro and iPad are all present in the same shot: 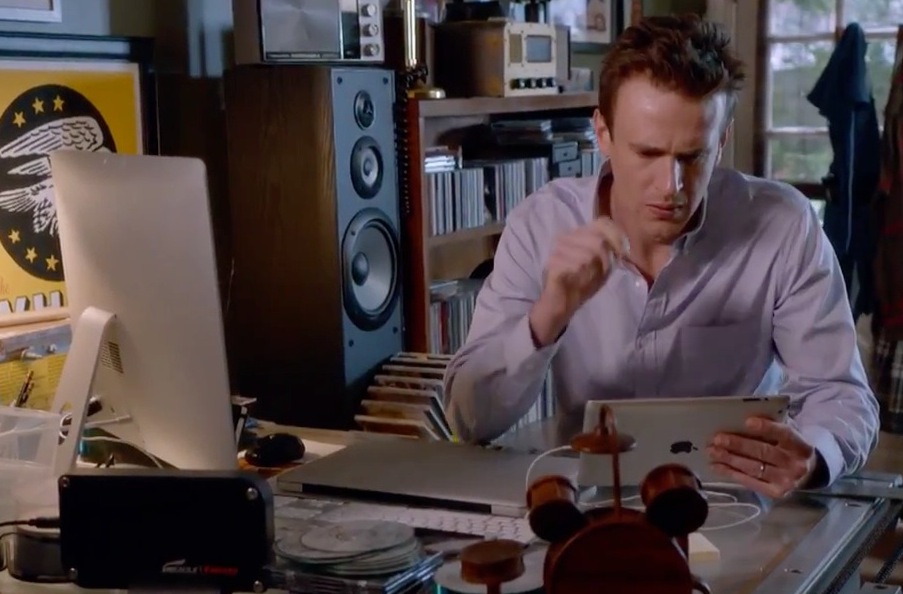 This Apple overload is reminiscent of House of Cards which infamously featured 9 apple products in a single shot. 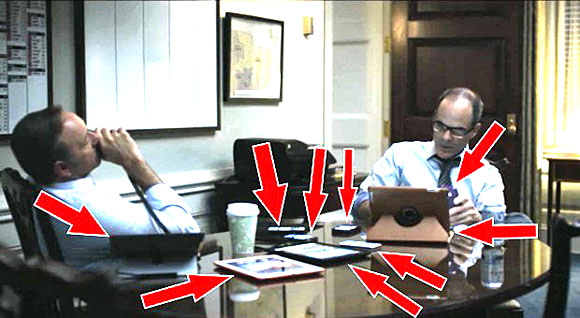 To give an idea of how present Apple will be on screen, in the 2 minutes and 40 seconds of the above trailer which show footage from the movie, 55 seconds of these include an Apple product on screen, in other words 34% of the time. Some of these are rather discreet but there are also a significant number of close up shots.

Furthermore, we can expect the movie’s dialogue to feature the iPad name if these quotes in the trailer are anything to go by:

Cameron Diaz: “Our sex tape ended up syncing to all the iPads we gave out as gifts!”

Cameron Diaz “We are gonna get back every one of those iPads!”

Despite the considerable screen time we can expect Apple to enjoy, their product which will gain the most attention in this movie is actually not an electronic, but their online file storage: iCloud.

Once the iPads have been handed out to their friends, Diaz and Segel realise that their recently filmed sex tape has been uploaded to all the tablets through iCloud. What follows is a mad dash around town to retrieve the iPads and get their home video offline.

Finally, the trailer also shows the use of Siri:
Jason Segel: “Siri, how do you preform CPR on a dog?”‘

All of the above indicated one thing, you will be seeing a lot of Apple in this movie.

But how will this portrayal of Apple in SEX TAPE affect the Brand’s perception?

Firstly, in terms of the presence of its electronics, Apple will continue to be shown as an omnipresent Brand used by all.
As a major plot point involves Diaz and Segel’s characters giving iPads to a number of people at Christmas, some viewers may start considering iPads as the Apple product to give as a present to adult friends and family.

However, still relating to iPads, the trailer indicated that as they retrieve the tablets, the flustered couple will also be destroying them. A scene is also shown in which Diaz can be seen destroying servers with a bat. Given the plot, and how iCloud works, it can be assumed they will be breaking into the Apple headquarters to attempt to remove their sex tape from the system.

The point being that, whilst Apple will often be seen, it may not bode well for the Brand image if much of it screen time involves its product and facilities being destroyed.

Another potentially negative portrayal of Apple is implied by this dialogue:

Jason segel: “It went up, it went up into the Cloud”
Cameron Diaz: “And you can’t get it down from the Cloud?”
Jason segel: “No one understands the Cloud, it’s a fucking mystery!

Whilst iCloud will get plenty of publicity from the is movie, if it is shown as hard to use, mysterious and prone to uploading private files for other people to access, this may scare a lot of viewers from trying it.

A final twist to this movie and its relationship with Apple is the studio putting it out:

Sony has a track record of placing its own electronics in its studios movies, such as THE AMAZING SPIDERMAN, and at the very least there is a strong connection between their movie production branch and there electronics one.

Hence, it seems surprising that one of Apple’s competitors would put out a movie that not only shows Apple products throughout, but whose the plot is based on them.

Whilst Sony does not have a cloud computing service that rivals the iCloud directly, they have recently launched Sony Media Cloud Service which seems to be directed at media sharing. The plot of this movie centres on the sharing a home movie so this might have been relevant. Thought further research indicates that Sony files sharing service might be more targeted at professionals.

One explanation could be that Sony did not want its product associated with the negative associations mentioned above so preferred using Apple ones, even if it meant giving them publicity. Though they could have used anonymous product and an anonymous file sharing service rather than Apple.

We look forward to this movie being release, and once it does, expect a new article here looking to answer some of the questions mentioned above.