The following article focuses specifically on the Brands that received the most exposure across this summer’s #1 movies at the US box office. For more information on on our movie sample, data collection and general methodology you can download our full report by clicking here.

To learn more about Concave Brand Tracking and our services, please contact us at info@concavebt.com.

Despite only appearing in STRAIGHT OUT OF COMPTON, the Los Angeles Dodgers Brand was actually more visible than any other Brand this summer before accounting for ticket sales.

The Brand had close to 23 minutes of screen time, 100% subtle discernibility and its logo was visible in 92% of its screen time. All this in a single movie. This ranks as one of the most visible appearances by a Brand of all time. The only Brand that has appeared more visibly in a single movie in Concave Brand Tracking’s database is the Lego Brand in THE LEGO MOVIE (2014).

The Raiders, Chicago White and MLB Brands also had similarly high amounts of visibility in STRAIGHT OUT OF COMPTON (2015). They rank 11th, 13th and 14th respectively in this summer’s ranking, just outside the top 10.

Despite its immense visibility in STRAIGHT OUT OF COMPTON (2015), the Los Angeles Dodgers Brand does not appear higher in this summer’s ranking due to the gangster rap biopic being the 4th lowest grossing weekly #1 movie of the summer. Hence, Brands with less visibility, but which appeared in multiple more successful movies, rank higher.

The Los Angeles Dodgers Brand did not appear in any 2014 #1 summer movies.

Though it did not star in any summer movies – unlike other car Brands in this top 10 – Ford combined significant appearances in SAN ANDREAS, ANT-MAN and FURIOUS 7 as well as minor appearances in 4 other movies for almost 4 ½ minutes of total screen time.

Ford was mostly seen subtly this summer but had a logo/name visibility of 36% and the movies it appeared in only grossed 225 M at the US box office, on average. These last 2 metrics were both below the average of this top 10. All in all, this lands Ford as the 9th most visible Brand in 2015 summer movies. This is down from #3 in 2014, when Ford appeared in 12 of the 14 weekly #1 summer movies.

The Brand appeared in 5 weekly #1 movies, though it only received around 3 minutes of total screen time. However, Beats by Dre had the 2nd highest logo/name visibility and the highest average domestic box office gross. The headphones Brand appeared in JURASSIC WORLD, AVENGERS: AGE OF ULTRON and FURIOUS 7, by far the 3 highest grossing live action movies of the summer.

Though appearing in 5 different #1 movies this summer, Mercedes-Benz got most of its visibility in JURASSIC WORLD, in which it starred alongside Samsung. The Brand also had a significant appearance in FURIOUS 7 and one its Actros trucks featured in an AVENGERS: AGE OF ULTRON action sequence.

Despite only receiving about 4 minutes of screen time across its 5 movies, Mercedes-Benz is the 7th most visible Brand of the summer due to high logo/name visibility and the 2nd highest average gross for the movies it was in. This is up from #9 in the summer of 2014, where it appeared in more movies. However, none of them did nearly as well as JURASSIC WORLD, FURIOUS 7 or AVENGERS: AGE OF ULTRON.

Nike got significant exposure throughout PITCH PERFECT 2 and STRAIGHT OUTTA COMPTON and also appeared, albeit less visibly, in JURASSIC WORLD. Its appearance in this summer’s dinosaur blockbuster lifted its average movie gross to 264 M, though no other movie it was in made over 185 M. So while Nike had the 4th most screen time and 3rd highest logo/name visibility, we only find it to be 6th most visible Brand in summer 2015 movies.

This is still up from summer 2014 when Nike ranked as the 7th most visible Brand. It appeared significantly in CAPTAIN AMERICA: THE WINTER SOLDIER, 22 JUMP STREET, THE FAULT IN OUR STARS and NEIGHBORS as well as less visibly in 3 other movies.

Though Apple remains among the most visible Brands in movies, there has been a clear shift in momentum in recent years that has left it excluded from Hollywood’s highest grossing tent-poles. With the exception of some very discreet appearances in FURIOUS 7, Apple was absent from the 4 highest grossing summer movies of 2015. This can largely be attributed to the rise of Samsung, which was the main electronics Brand in JURASSIC WORLD, AVENGERS: AGE OF ULTRON and FURIOUS 7. Apple also went missing in the latest MISSION: IMPOSSIBLE movie, despite its history with the franchise.

Apple did still have very visible appearances in PITCH PERFECT 2 and SAN ANDREAS.

After being the #1 Brand in summer 2014 – thanks to significant appearances in TRANSFORMERS: AGE OF EXTINCTION and CAPTAIN AMERICA: THE WINTER SOLDIER – we find Chevrolet at #4 this summer.

In summer 2015 Chevrolet appeared in 8 of the 10 #1 live action movies, more than any other Brand. However, in none of these did it get nearly as much exposure as in its top movies last summer. In FURIOUS 7, which was Chevrolet’s most visible showing for summer 2015, the Brand only had 40% as much visibility as in CAPTAIN AMERICA: THE WINTER SOLDIER and 28% the visibility it had in TRANSFORMERS: AGE OF EXTINCTION.

BMW also appeared in 6 movies in summer 2014, but it did not receive more than 18 seconds of screen time in any of them, leaving it as only the 46th most visible Brand. This summer however, BMW skyrocketed to #3, spearheaded by over 6 minutes of screen time in MISSION: IMPOSSIBLE – GHOST PROTOCOL.

Though the Tom Cruise franchise accounted for over 60% of BMW’s visibility and 75% once box office figures are factored in, the Brand also had quite a visible appearance in SPY. More discreet appearances in FURIOUS 7, STRAGHT OUTTA COMPTON, AVENGERS: AGE OF ULTRON and SAN ANDREAS round off BMW’s summer. As such, BMW is the most visible car Brand in summer 2015 #1 movies, beating other highly visible competitors Mercedes-Benz, Chevrolet and Ford.

After just missing out on the top 10 ranking in last year’s summer movie, Adidas soared to #2 this year, overtaking in the process, its main competitor, Nike. Adidas appeared substantially in STRAIGHT OUTTA COMPTON as well as in PITCH PERFECT 2. Though these were not particularly high grossing #1 movies, compared to other #1 movies this summer, Adidas overcame this with 4 and 2 minutes of screen time in them, respectively. The sports Brand also appeared in AVENGERS: AGE OF ULTRON, though relatively discreetly.

Adidas’ most visible appearance of the summer was actually in SOUTHPAW, which is not included in this sample as it never reached #1 at the US box office.

In 2014, Samsung entered a new phase of its entertainment marketing strategy. We began seeing movies which featured almost exclusively their electronics, whether it be phones, monitors, TVs, laptops or tablets. Such movies included DRAFT DAY, 3 DAYS TO KILL and NON-STOP. However, only 1 such movie – LUCY – made it to #1 at the US box office in the summer of 2014. This, along with other less visible appearances, left Samsung ranked #8 for that period.

In summer 2015, not only did many more “Samsung movies” make to #1, but 3 of them grossed more domestically than any movie in all of 2014. These were of course JURASSIC WORLD, AVENGERS: AGE OF ULTRON and FURIOUS 7. They had 5, 3 and 1 minute of Samsung screen time, respectively.

What this means is that Samsung’s rise to the top of this summer’s entertainment marketing ranking is due to 2 distinct factors. Firstly, when Samsung appears in a movie, it gets a lot of screen time. In summer 2015 #1 movies Samsung accumulated over 14 minutes of screen time. Far more than any other Brand in that period, with the exception of the Los Angeles Dodgers. It is actually over double what most other Brands in this top 10 received. Secondly, in 2015, Samsung appeared in movies that did very well at the box office.

It is worth noting that Samsung’s high amount of screen time is not without its caveats. Samsung has by far the lowest logo/name visibility of this top 10, and in 46% of its screen time its products only appeared discreetly or in the background. It does however, also have by far the highest % of obvious/close-up screen time of this top 10.

This is however not a problem for Samsung. While some Brands engage in entertainment marketing to to encourage an immediate purchases, Brands like Samsung are playing a longer game. They are creating a perception in these movies that Samsung is the go-to Brand for phones, tablets, TVs, monitors, laptops and electronics in general. This is achieved by having their products omnipresent on screen, even if they are not always getting much attention. This macro scale strategy was largely introduced by Apple, who according to our data, has now been beaten at its own game by one of its main competitors. 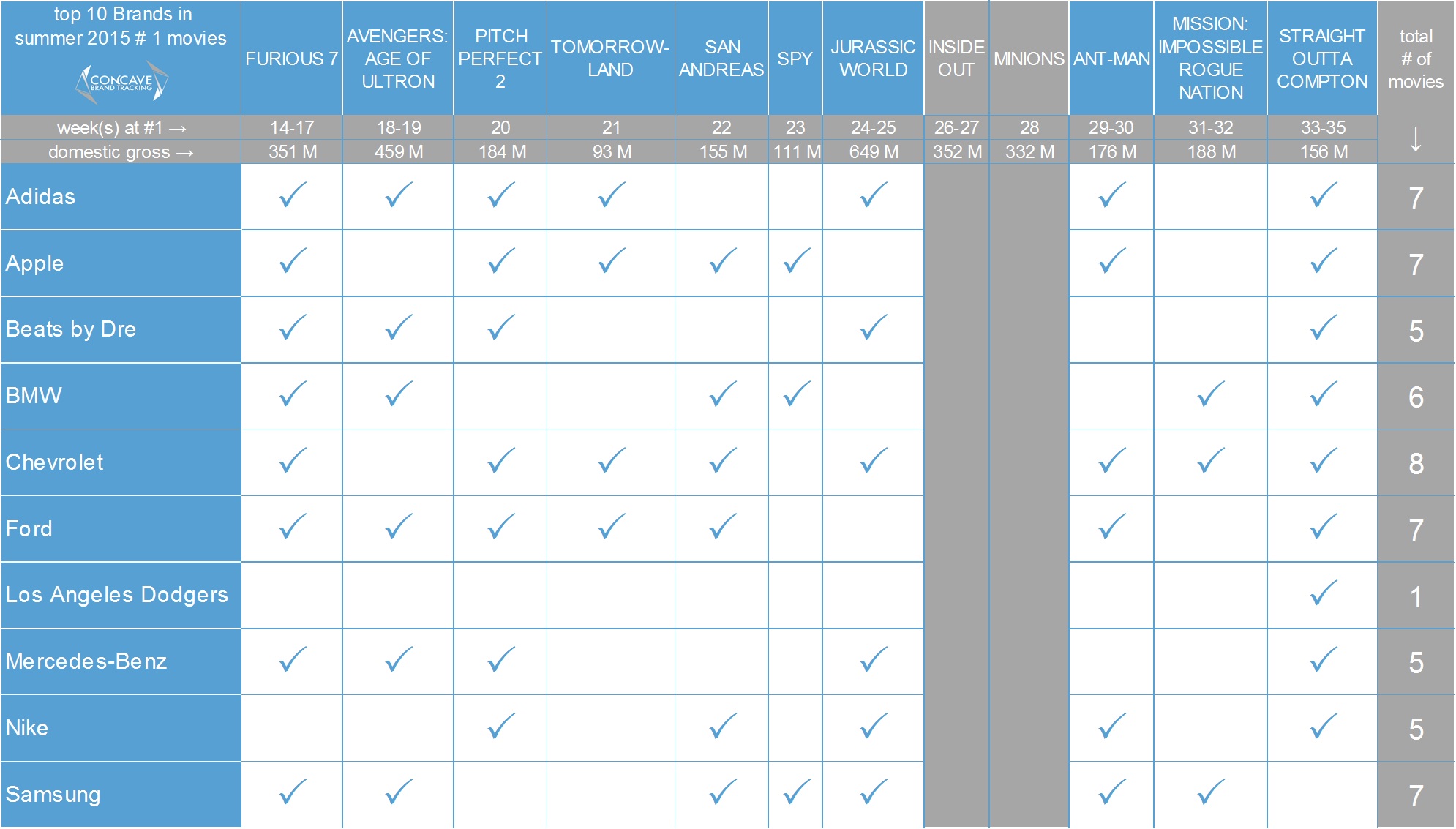 For a full analysis of your Brand vs. your competitors, any questions or further information please contact us at info@concavebt.com.

You can also download the PDF version of this report along with the details of our methodology by clicking here.