The long awaited BATMAN V SUPERMAN: DAWN OF JUSTICE (2016) finally hit theaters this weekend and Concave Brand Tracking caught one of the first showings to see which Brands populated the movie. We recorded over 30 identifiable Brands ranging from Olay shampoo to Airbus planes. In this article, we will look at how much total Brand exposure the movie contained as well as the 10 Brands that got the most individual visibility.


Check out our video version of this report!

All screenshots from BATMAN V SUPERMAN: DAWN OF JUSTICE (2016) come from trailers or other promotional materials and are the property of Warner Bros. Pictures.

We begin by comparing BATMAN V SUPERMAN: DAWN OF JUSTICE (2016) to the recent movies of each of the titular characters. Concave Brand Tracking found that DAWN OF JUSTICE had more total Brand visibility than any of the Christopher Nolan BATMAN movies and over 5 times more than MAN OF STEEL (2013).

If we look beyond DC movies, at other recent blockbusters, we find BATMAN V SUPERMAN: DAWN OF JUSTICE (2016) to have similar amounts of total Brand visibility as 2015’s MISSION: IMPOSSIBLE: ROGUE NATION (9% more) and FURIOUS 7 (2% less). Brand-filled movies such as ENTOURAGE (2015) and TRANSFORMERS: AGE OF EXTINCTION (2014) had 104% and 68% more total Brand visibility, respectively.

BATMAN V SUPERMAN: DAWN OF JUSTICE (2016) had significantly more Brand visibility than Marvel’s 2015 movies: ANT-MAN and AVENGERS: AGE OF ULTRON. The former had 52% as much Brand visibility and the latter only 40%.

25% of BATMAN V SUPERMAN: DAWN OF JUSTICE (2016) Brand visibility came in the form of glasses, more than any products. Many of the main characters such as Clark Kent (Henry Cavill), Alfred (Jeremy Irons) and Perry White (Laurence Fishburne) wore optical eyewear throughout the movie. As such, 3 of the top 10 Brands are glasses manufacturers.

With a lot of news reporting being shown in the movie, TV channels made up 15% of Brand visibility as do cars. TVs and monitors round off the top 5 most visible products.

Our top 10 begins with the first of 3 Brands of glasses. A supporting character, Senator Barrows (played by Dennis North) wears a pair of Ray-Ban glasses in all his appearances. These add up to over a minute of screen time. The Ray-Ban logo is however, never clearly seen.

As the character wearing the glasses is a suit-wearing politician, Ray-Ban is portrayed as a professional and formal Brand in a context of politics.

While Ray-Ban usually appears in entertainment in the form of sunglasses, its glasses do also appear occasionally. Seth Rogen, for instance, wore Ray-Ban glasses in both NEIGHBORS (2014) and THE INTERVIEW (2014). However, given the professional and political link Ray-Ban enjoys in BATMAN V SUPERMAN: DAWN OF JUSTICE (2016), we are most reminded of Claire Underwood wearing the Brand in HOUSE OF CARDS.

In BATMAN V SUPERMAN: DAWN OF JUSTICE (2016), near the end of the movie, the President of the United States is consulted on a major decision. Rather than showing him in person, he is heard speaking to his military command through a Nortel telephone. As such the Brand gets 25 seconds of screen time, of which 60% is in close-up shots, with the Nortel logo clearly visible. Despite the least screen time of this top 10, Nortel is the 9th most visible Brand given how clearly is product was shown.

While not nearly as common as telephone Brands such as Cisco or Avaya, Nortel has appeared in past major movies such as LET’S BE COPS and TEENAGE MUTANT NINJA TURTLES, both in 2014.

One of the movie’s villains, Anatoli Knyazev played by Callan Mulvey, wears a pair of Oakley sunglasses in an early scene. With almost a minute of screen time and its logo clearly visible, Oakley is the 8th most visible Brand.

Oakley is worn by Mulvey in the desert in a paramilitary context. This is a common portrayal of the Brand, bringing to mind its appearances in TRANSFORMERS: AGE OF EXTINCTION (2014), LONE SURVIVOR (2013) or AMERICAN SNIPER (2014).

At #7 we find Fiat Chrysler Automobiles’ Dodge Brand. Its vehicles appeared throughout the movie both as police cars and Lex Luthor’s henchmen’s mode of transport in a car chase with Batman. The Brand got almost 2 minutes of screen time in BATMAN V SUPERMAN: DAWN OF JUSTICE (2016), but never had its logo seen.

Dodge vehicles are frequently shown as police vehicles in entertainment. This occurred recently in such major movies as TERMINATOR GENISYS (2015) and GET HARD (2015).

At #6 we find another FCA Brand, Jeep. It got almost all its screen time in the opening scene showing Bruce Wayne’s (played by Ben Affleck) point of view in the Metropolis showdown from the end of MAN OF STEEL (2013). Jeep gets just over a minute of screen time with its logo visible in 91% of it.

In the aforementioned opening scene, Affleck charges a 2015 Jeep Renegade through the city. This portrays the Brand as fast and agile. Jeep was shown in a similarly action sequence in last year’s FURIOUS 7 (2015).

In BATMAN V SUPERMAN: DAWN OF JUSTICE (2016), we are often shown news channels reporting on world events. While many of the channels are fictitious, PBS is one of the 2 real TV channels. It only got 26 seconds of screen time, but all in close-ups with the PBS logo clearly visible.

At #4 we find the 2nd most visible Brand of glasses: Moscot. The Brand is worn exclusively by Jeremy Irons as Alfred in all his appearances, which amount to almost 5 minutes of screen time.

Moscot has been appearing more and more across entertainment in recent years. It was worn by Jeffrey Wright in the last 3 HUNGER GAMES movies and by Matthew Broderick in TRAINWRECK (2015). Moscot has also appeared in TV shows. The Brand was worn by Robin Wright in the last 2 seasons of HOUSE OF CARDS (2015-2016) and Aubrey Plaza in the final season of PARKS AND RECREATION (2015).

Unsurprisingly, the most visible Brand of glasses is that worn by Henry Cavill as Clark Kent. The eyewear is a pair of Bespoke Horn glasses by British Brand TD Tom Davies. The glasses get almost 5 minutes of screen time, though the Brand’s name/logo is never seen.

While TD Tom Davies is quite a rare Brand in entertainment, it was worn by Angelina Jolie in THE TOURIST (2010).

While PBS got under 30 seconds of screen time in BATMAN V SUPERMAN: DAWN OF JUSTICE (2016), CNN got over 1 ½ minutes, making it the most visible TV channel and the 2nd most visible Brand overall.

CNN is one of the most common TV channel Brands in both TV and movies. Concave recently found it to be the 4th most visible Brand in season 4 of HOUSE OF CARDS.

Concave Brand Tracking found Samsung to be the #1 Brand in 2015 summer #1 movies and it ended up featuring heavily in 3 of the 5 highest grossing movie of the year. Samsung is clearly aggressively pursuing its entertainment marketing program as it ends up being the most visible Brand in BATMAN V SUPERMAN: DAWN OF JUSTICE (2016).

Samsung achieved this with over 7 minutes of screen time – more than any other Brand – in the form of monitors, TVs and laptops. These products appeared either in the background or discreetly in 41% of Samsung’s screen time, subtly in 37% and in obvious or close-up shots in 23%. However, Samsung’s logo was only clearly visible in 3% of its screen time.

Samsung was shown in the Batcave and Lex Luthor’s laboratory, associating the Brand with technology. Its products also appeared in The Daily Planet’s offices, portraying it as a professional Brand used by journalists. 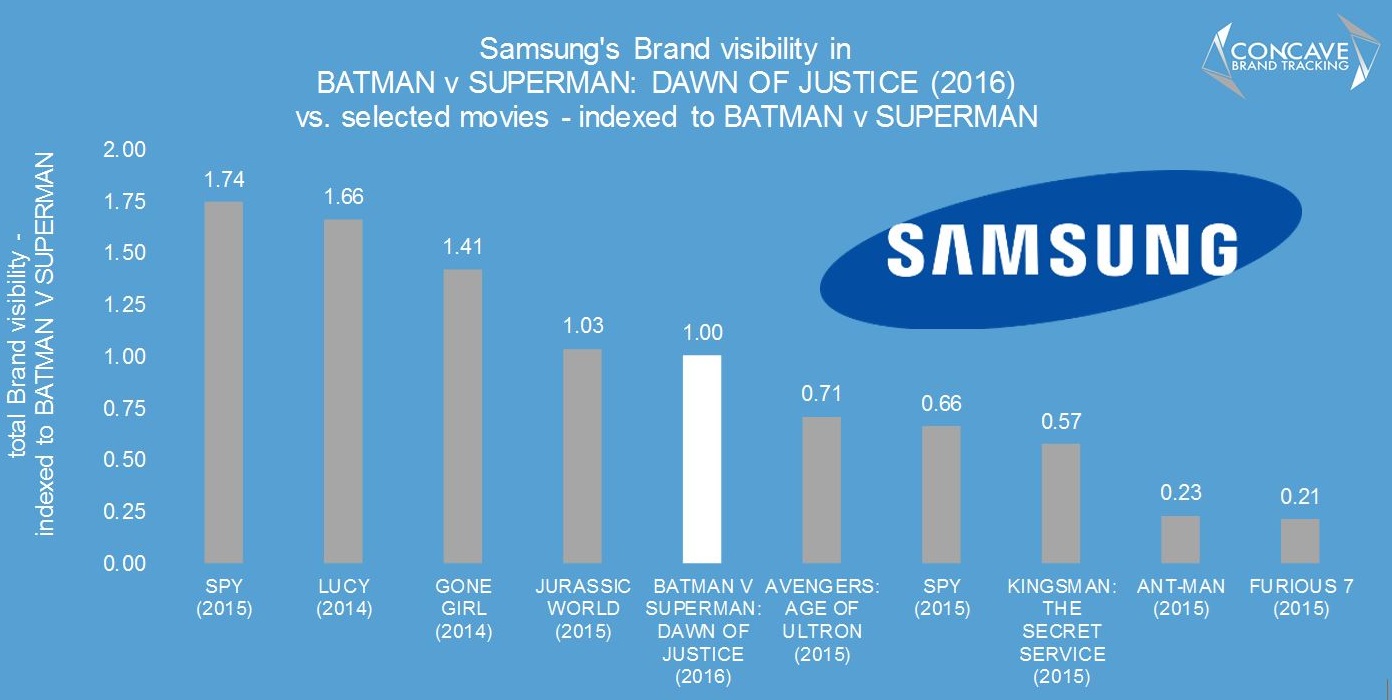 Brands that appeared but did not make the top 10 included Rolls-Royce, EMC and MV Agusta. All 3 were associated with Jesse Eisenberg Lex Luthor.

Other FCA Brands such as Ram Trucks and Chrysler appeared.

Nikon, which was the most visible Brand in MAN OF STEEL (2013) appeared very briefly on Amy Adams’ desk.

While Samsung was the #1 Brand in the movie, the only identifiable mobile phone Brand was a Microsoft handset used briefly by Ben Affleck.

An Under Armour basketball is seen in Lex Luthor’s laboratory about 2/3 way through the movie.