Concave Brand Tracking has combed through all eight episodes of the third season of STRANGER THINGS, recording all recognizable branded products that appeared in them.

In addition to recording sighted brands, we observed how visible the products were, how long they were on screen, which brands were mentioned in the dialogue and how much product placement advertising value was generated in the show.

Concave Brand tracking valuation based on screen time, product discernibility, logo/name visibility, the cost of traditional advertising and viewership (see the section at the end of this article for more info on the audience figures used in this article).

notes: These brands are ranked in terms of which are the most visible to someone watching all eight episodes. They are not all in the order of their advertising value because the earlier episodes got more viewers than the later ones.
Concave Brand Tracking considers any brand appearance in entertainment as product placement. These can be the result of monetary compensation, providing free products, lending products, or even cross promotion advertising campaigns. However, in the case of STRANGER THINGS season 3, Netflix has communicated to Concave Brand Tracking that no money changed hands to get the brands into the show. According to a spokesperson: “None of the brands and products that appear in Stranger Things 3 were paid for or placed by third parties. They’re all part of the Duffer Brothers’ storytelling, which references 1980s consumer and popular culture.”

Now, here are the top 10 most visible brands in season three of STRANGER THINGS along with their advertising value for the first three days of the show’s airing.

You can also check out our video of the top 10 most visible brands in season three of STRANGER THINGS here:

Burger King appeared in five of the eight episodes for a total of just over two minutes of screen time. It was one of the many storefronts in the mall but was also seen in the form of takeout in CHAPTER SIX. Furthermore, Burger King is one of the many brands with a cross-promotion deal with STRANGER THINGS.

Despite being a major global brand, Burger King does not frequently use product placement as a marketing tool. It appeared in passing in ALWAYS BE MY MAYBE (2019) and SICARIO: DAY OF THE SOLDADO (2018) but we have to go back to 2008 for a truly iconic appearance in IRON MAN (2008).

Reebok sneakers were worn by an array of characters, including Joyce Byers (Winona Ryder), Eleven (Millie Bobby Brown) and Dustin Henderson (Gaten Matarazzo). Though the shoes are mostly seen discreetly, they also appear in a number of close-ups in which the Reebok logo is visible.

In recent years, Reebok has focused on the promotion of its Classic range, making STRANGER THINGS the perfect partnership.
No stranger to the practice of product placement, Reebok was also the 83rd most visible brand in 2018 movies with sightings in many movies, including VENOM, CREED II and UNCLE DREW.

Adidas appeared in every single episode of STRANGER THINGS, mostly as the shoes worn by Mike Wheeler (Finn Wolfhard) and Steve Harrington (Joe Keery) and various pieces of clothing worn by secondary characters.

Adidas is a very common product placement brand across entertainment and was the 17th most visible brand in 2018 movies.

A Sharp radio and microwave appeared in episode one. The radio was shown again in episode three. A Sharp cash register is also seen in the ice cream shop in episodes two, three and four. Although this only totals one and half minutes, Sharp featured in many close-ups, boosting its visibility.

A 7-Eleven store features prominently in episode five and then a 7-Eleven Slurpee was consumed throughout episode six. This totaled over two and a half minutes of screen time with 100% logo visibility.

7-Eleven has appeared in an array of TV shows including being a staple of SILICON VALLEY where the character Nelson “Big Head” Bighetti (Josh Brener) is rarely seen without a Big Gulp.

7-Eleven has not been shown particularly visibly in movies in recent years though we did spot it fleetingly in CREED II (2018) and THOR (2011).

Casio watches were worn by such main characters as Jim Hopper (David Harbour) and Mike Wheeler (Finn Wolfhard). This added up to over 8 minutes screen of time, more any other brand. However, the watches were mostly seen discreetly which is why Casio is not higher in this top 10.

Casio can be seen prolifically in entertainment. Its watches are worn in TV sitcoms like THE BIG BANG THEORY as well as in action shows such as THE LAST SHIP. It was also the most prominent watch brand in 2018 movies, with appearances in DEN OF THIEVES and JURASSIC WORLD 2.

Chevrolet was in all but one episode of STRANGER THINGS. Most of the brand’s four minutes of screen time came in the form of Jim Hopper’s (David Harbour) 1987 Blazer SUV and Billy Hargrove’s (Dacre Montgomery) 1979 Camaro.

Chevrolet appears in many TV shows especially in the form of its Suburban SUVs that are used by government agencies and as chauffeured cars.

Chevrolet was also the 5th most visible brand in 2018 movies. It was in A STAR IS BORN, A SIMPLE FAVOR and ANT-MAN AND THE WASP.

Though various models can be spotted in the background, it is a 1984 Cadillac Eldorado Biarritz Convertible that provided the brand with most of its exposure in STRANGER THINGS. The car is introduced in CHAPTER FIVE and remains in the show for the rest of the season, totaling three and a half minutes of screen time.

Cadillac is in various other TV shows ranging from SILICON VALLEY to BILLIONS, RAY DONOVAN and HOUSE OF CARDS. It was also the 13th most visible product placement brand in 2018 movies with appearances in GREEN BOOK, UNCLE DREW and THE PREDATOR.

Coca-Cola was in every single episode for a total of nearly five and a half minutes of screen time. With strong logo visibility and even a mention in the dialogue of CHAPTER SEVEN, Coca-Cola was the most prominent brand in season three of STRANGER THINGS. Based on a conservative estimate of the show’s viewership, this exposure was worth one and a half million dollars in just the first three days the show has been available on Netflix.

Coca-Cola appears profusely across TV and movies. In 2018 it was in 18 of the top 100 movies at the US box office, including GREEN BOOK, THE MEG, SPIDER-MAN: INTO THE SPIDER-VERSE and A SIMPLE FAVOR. 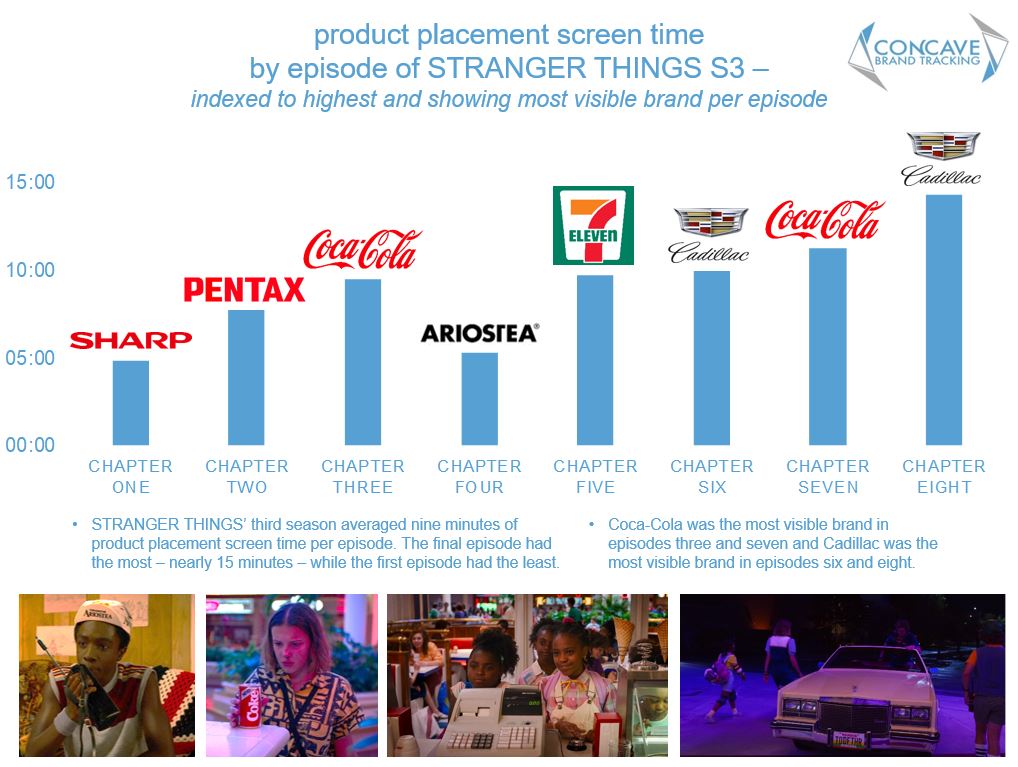 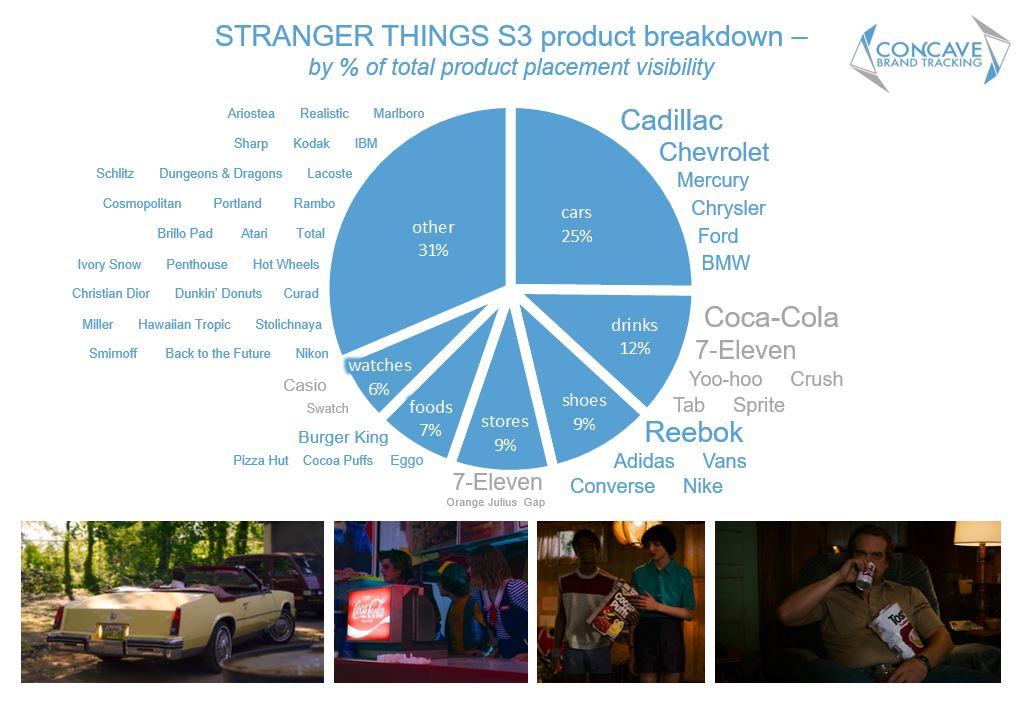