Concave Brand Tracking has manually combed through the top 50 movies at the US box office for 2017, recording every Brand that appeared. We also measured how visible the product placements were, how long they were on screen for and how much advertising value they generated, as well as an array of contextual data regarding Brands’ portrayal.

Bags appeared in various movies that showed schoolchildren including SPIDER-MAN: HOMECOMING, JUMANJI, IT and TRANSFORMERS: THE LAST KNIGHT. Jansport appeared in all 4 and made up 67% of the category overall.

Dell was also the 10th biggest Brand in 2017 movies overall.

Many different Brands of t shirts were recorded, but Under Armour led the pack with 44% of the market.

Other Brands that appeared in the form on t shirts included Metallica, Nike, Duran Duran and Harvard University.

Cutler and Gross was the 3rd biggest Band in 2017 movies and its appearance in KINGSMAN: THE GOLDEN CIRCLE was the 2nd biggest single movie product placement of the year.

Samsung made up about 1/3 of the approximately 16 million dollars of advertising value generated by TV product placement.

Other major TV Brands in 2017 movies were Sony, Hisense, LeTV and Insignia.

A dozen Brands of monitors appeared in 2017 movies, but Dell led the category with 37% of its overall value.

Between its dominance of the laptop and monitor product categories, Dell was the 10th biggest product placement Brand of 2017.

Asus, Samsung, Sony and others also appeared in 2017 movies in the form of monitors.

Apple dominated the mobile phone category with its iPhones getting 50% of the generated advertising value. This largely contributed to Apple being the #4 product placement Brand if 2017.

Other phones Brands in 2017 movies included Sony, Samsung and Microsoft.

The toy category was dominated by Lego, with 99.8% of the market share. Lego’s apperances in THE LEGO BATMAN MOVIE and THE LEGO NINJAGO MOVIE were among the biggest product placements of 2017 and made Lego the #1 Brand of the year.

Other Brands that appeared included Eth A Sketch and Star Wars.

Over 100 different car Brands appeared in 2017 movies. They collectively received almost 200 million dollars of advertising value. Chevrolet led the category with a 15% market share. Chevrolet was also the #2 Brand overall in 2017 movies. 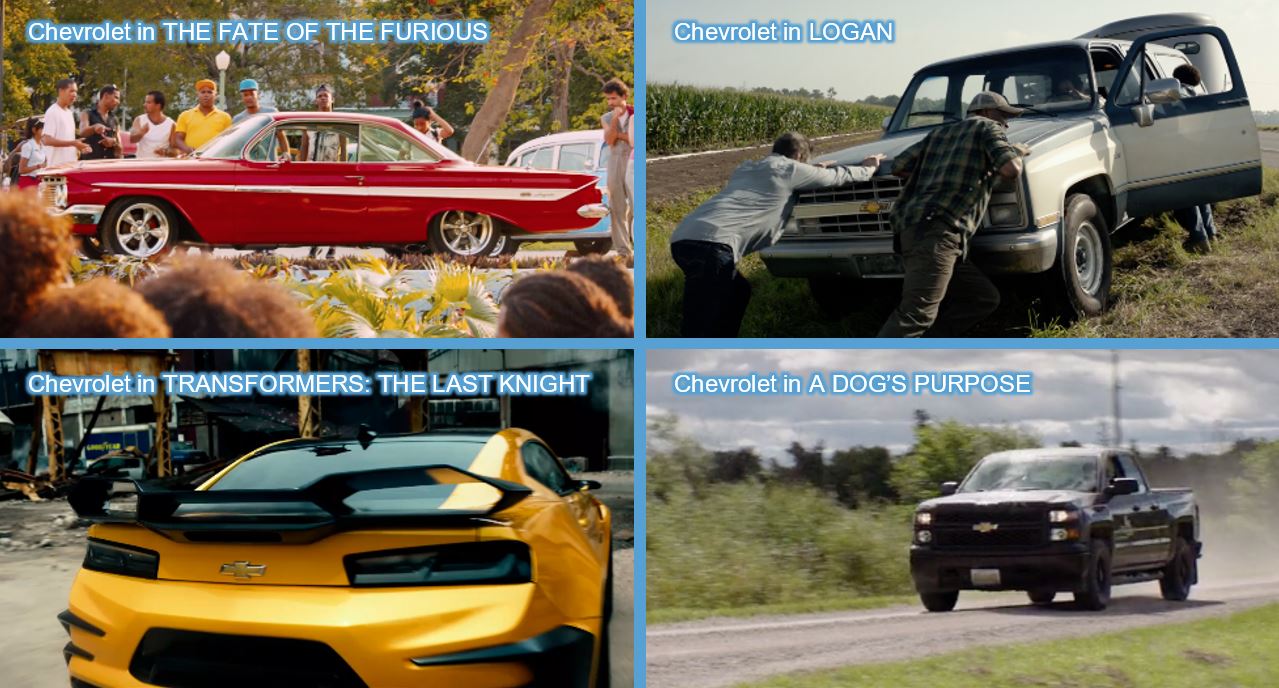 Ford, Dodge, Mercedes and Chrysler were also among the top car Brands.

disclaimer: Concave Brand Tracking does work with certain Brands in this article. However, as a market research company, our methodology is entirely objective. We are a 3rd party that provides insights into the presence and portrayal of Brands in entertainment. We are not directly involved in our client’s strategic planning or the process of coordinating product placements.