Season two of BIG LITTLE LIES featured over 60 different brands in the form of nearly 40 different types of products. These ranged from cars and sunglasses to wet suits and headphones. All these product placements generated almost 1.8 million dollars in total advertising value for the brands.

https://www.youtube.com/watch?v=bjapkzuHRW8
Here is a look at the five most visible brands in season two if BIG LITTLE LIES.

Renata Klein (Laura Dern) drives a 2017 Tesla in episode two. This earned the brand almost one and a half minutes of screen time. Furthermore, the car is referred to by name in episode four.

Beyond the exposure gained by being seen and mentioned, Tesla is used as a status symbol of a wealthy individual. This is further reinforced when the car’s confiscation is a traumatic event for Renata. 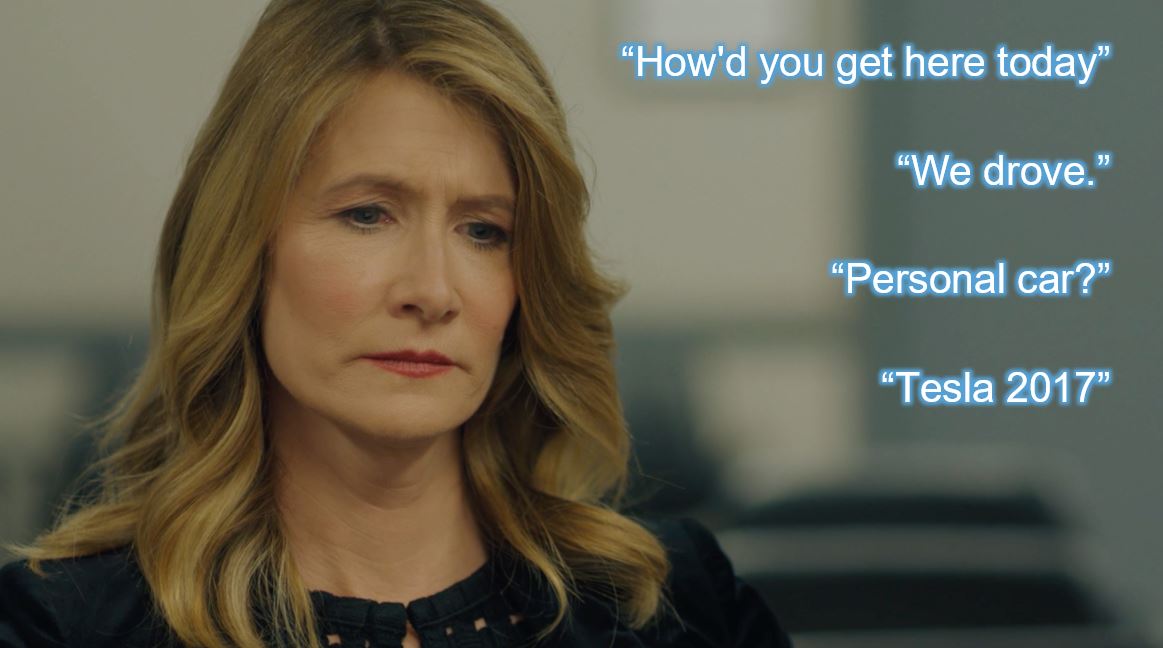 While Tesla is no stranger to the big or silver screens, it has never appeared in a consistent enough way to suggest that product placement is a key part of their marketing strategy.

It has appeared in passing in such shows as RAY DONOVAN, SOUTH PARK, BILLIONS and SUCCESSION and was part of one of the storylines of season five of SILICON VALLEY.

Audi cars were driven by both Celeste Wright (Nicole Kidman) and Mary Louise Wright (Meryl Streep). While these characters are also clearly wealthy, the brand is more associated with family as it is used to drive around children.

However, one less positive association for Audi is when Celeste crashes one of their vehicles while zoned out on Ambien (which incidentally is the most frequently mentioned brand).

Audi is one of the premier product placement brands in the world these days. It was the 25th most visible brand in 2018 movies with appearances in over 20 of the top 100 movies. These included FIFTY SHADES FREED, CRAZY RICH ASIANS and MISSION: IMPOSSIBLE – FALLOUT.

In terms of TV shows, Audi has appeared in countless shows ranging from MODERN FAMILY and 13 REASONS WHY to EMPIRE, HOUSE OF CARDS or RAY DONOVAN.

Dell monitors were used in many professional contexts in season two of BIG LITTLE LIES, including police stations, offices and courtrooms.

Dell has consistently been one of the most visible brands in entertainment in recent years. It was the #1 brand in 2016 and most recently #2 in 2018.

Dell also has one of the strongest presences in TV, with prominent visibility in HOMELAND, JACK RYAN, THE BIG BANG THEORY, BOSCH, RAY DONOVAN, SILICON VALLEY, SUITS and many more shows.

Madeline Martha Mackenzie (Reese Witherspoon) drives a 2018 Buick Enclave throughout much of season two of BIG LITTLE LIES. These appearances add up to almost 5 minutes o screen time, with the Buick logo visible I much of this.

Buick is not a common brand in entertainment though over the years it has appeared in such show as HOUSE OF CARDS, HOMELAND or BALLERS. It appeared in 15 2018 movies, with its biggest appearance being in DEADPOOL 2.

Apple got over 13 minutes of screen time season two of BIG LITTLES LIES. It appeared in the form of phones, laptops, tablets, computers and a smartwatch. The brand was also associated with nearly all of the main cast.

Apple is also one of the most omnipresent brands in entertainment. It appears in one form or another in most TV shows that take place in the modern world and was the #1 brand in movies for 2018.

So how does this compare?

Interestingly, season two of BIG LITTLES list contained about the same amount of on-screen brand exposure as the latest season of STRANGER THINGS. However, over 18 million viewers binged the entire Netflix series in the first three days of its release versus an average viewership of under three million for the HBO show. As such, BIG LITTLE LIES generated only a fraction of the product placement advertising value in STRANGER THINGS S3.

If we compare to other HBO shows like SILICON VALLEY and VEEP, we find that BIG LITTLES LIES had much less product placement than its network counterparts.