Concave Brand Tracking recently published a report looking at the top 20 most visible Brands in 2014 music videos. We now turn our attention to the Brands most often mentioned in 2014 music lyrics.

Our sample includes all songs that charted for at least 1 week in Billboard’s weekly Hot 100 chart. This adds up to over 450 different songs.

Concave Brand Tracking found that at least one commercial Brand was mentioned in 29% of these songs. In contrast, Brands were shown in 87% of music videos for this same sample’s songs.

average number of Brands per song

Concave also looked at the average number of Brands mentioned in songs. Overall, the average songs, with at least 1 Brand in its lyrics, had 2.6 different ones. When breaking it down by genre, Soul songs with at least 1 Brand in their lyrics featured, on average, almost 4 different ones. Hip hop followed with 3.1. Dance and Rock had the lowest average numbers with 1.4 and 1.0, respectively.

The song – that charted in Billboard’s weekly Hot 100 in 2014 – with the most commercial Brands in its lyrics  was THE DEVIL IS A LIE by Rick Ross. In that single song, 9 different Brands were mentioned. They ranged from Mercedes-Benz and Barneys to Walmart.

most common product to be mentioned

If we look at the type of Branded products that were mentioned, we find that cars account for 23% of Brands in song lyrics. More than any other product. Fashion houses followed, along with liquor Brands, websites and shoes. The 5 most common products made up 48% of all Brand mentions in 2014. 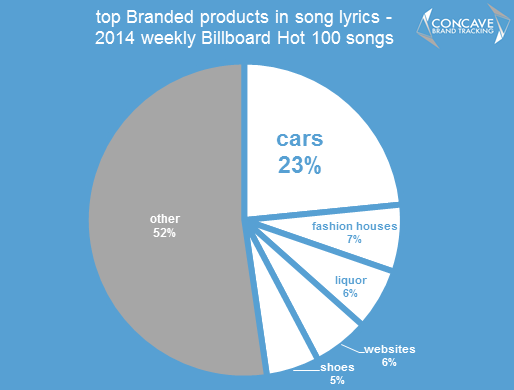 Here we are looking at the top 5 Brands mentioned in songs that charted in Billboard weekly 2014 Hot 100 chart. The ranking is based exclusively on how many songs the Brands appeared in

Jack Daniels, Cadillac, Chevrolet, Twitter and Rolls-Royce were each mentioned in 6 different songs.

The Italian luxury car Brand was mentioned in 7 songs, ranging from Britney Spears’ WORK B**CH! and Jessie J’s BURNIN UP’ to V.3005 by Childish Gambino.

5 of the 7 songs were Hip hop and the only songs in which Lamborghini was mentioned more than once was MOVE THAT DOPE by Future.

While they might not have much else in common, Instagram and Ferrari were both mentioned in 8 songs each.

Every single song Ferrari was mentioned in were Hip hop, except for LOYAL by Chris Brown. Rick Ross associated himself with the Brand in both SANCTIFIED and THE DEVIL IS A LIE, as did Usher in I DON’T MIND. Ferrari was never associated with a woman in any songs’ lyrics.

Instagrams’ lyrical occurrences varied from The Chainsmoker’s #SELFIE to Busta Rhymes’ CALM DOWN. It was mainly associated with photography and social media in general.

Rolex was mentioned in 10 different songs, with every single one being Hip hop except for SHE KNOWS by Ne-Yo.

Rolex was exclusively associated with black men in its mentions. These included Yo Gotti in ERRRBODY, Wiz Khalifa in FEELIN’ MYSELF, Quavo in HANDSOME AND WEALTHY, Lil Wayne in BELIEVE ME, Jay-Z in SEEN IT ALL, Ca$h Out in SHE TWERKIN, Kid Ink in SHOW ME and Juicy J in both SHE KNOWS and SHELL SHOCKED.

In almost every one of its mentions, Rolex was used by artists to show off. They were also often associated with customized jewerly.

With lyrical appearances in 15 songs, Mercedes-Benz was by far the most common Brand to be mentioned in music.

13 of these 15 songs were Hip hop while Mercedes-Benz was also mentioned in the Country song DRINK TO THAT ALL NIGHT by Jerrod Niemann and the Trap/R&B DRUNK IN LOVE by Beyoncé.

Interestingly, not all the mentions were positive. In DRINK TO THAT ALL NIGHT Jerrod Niemann boasts of having “a black Ford, not a white Mercedes”. Also, in SANCTIFIED, Rick Ross spoke of Mercedes-Benz as cheaper alternative to a Ferrari.