Audi in the TRANSPORTER franchise

THE TRANSPORTER REFUELED (2015) is the reboot/prequel to the TRANSPORTER trilogy which came out between 2002 and 2008 and starred Jason Statham. The latest movie features a completely new cast but has one very familiar “character” from the last 2 installments, Audi.

After starting off the franchise with Statham at the wheel of 1995 735i [E38] BMW in THE TRANSPORTER (2002), Audi became the starring car Brand in all the subsequent TRANSPORTER movies, including the latest one.

In this article we will look at a variety of metrics of Audi’s presence and portrayal in the TRANSPORTER franchise. These metrics include exposure, the demographics of the individuals associated with the vehicles and how Audi is contextually portrayed.

For a more in-depth view of the visibility we look at the various aspects of the Brands’ exposure.

In terms of how discernible the vehicles were in the various movies, we see that in around ¾ of their respective screen times they were all shown subtly. This mean they are clearly seen on screen but are not getting particular attention beyond their use. In THE TRANSPORTER REFUELED (2015), Audi is shown in an obvious way in 5% of its screen time vs. less than 1% in TRANSPORTER 3 (2008). These are shots that are solely meant to show the vehicle without being close-ups. There is also a decrease in the % of screen time in which Audi was seen in the background. It is only 13% in THE TRANSPORTER REFUELED (2015) vs. 22% on TRANSPORTER 3 (2008). 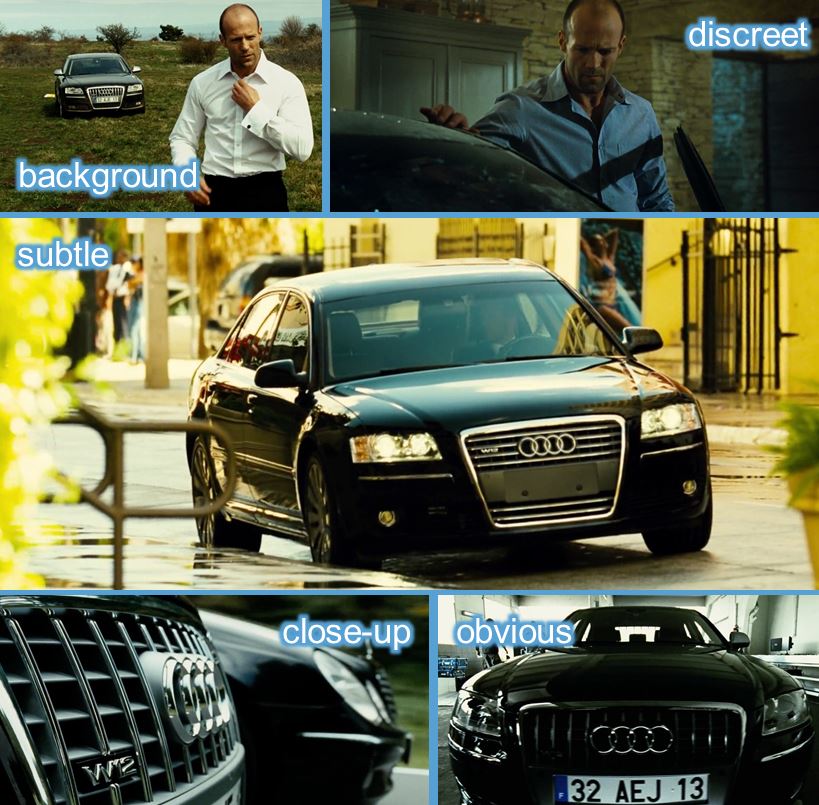 Finally, Audi’s logo is visible in 90% of its screen time in THE TRANSPORTER REFUELED (2015). This is on par with the logo/name visibility in TRANSPORTER 3 (2008) and higher than in the first 2 movies.

If we expand to car Brands in general, we find that the Audi’s integration in the 2008 and 2015 TRANSPORTER installments are far more visible than any other car Brands in Concave Brand Tracking’s database. They supersede Chevrolet in all the TRANSFORMERS movies, Ford in NEED FOR SPEED (2014) as well as Dodge or any other single car Brand in the FAST & FURIOUS franchise.

While Audi’s visibility remains similar in THE TRANSPORTER REFUELED (2015) as in TRANSPORTER 3 (2008) there has been a big shift in one aspect of its main user’s demographic profile. 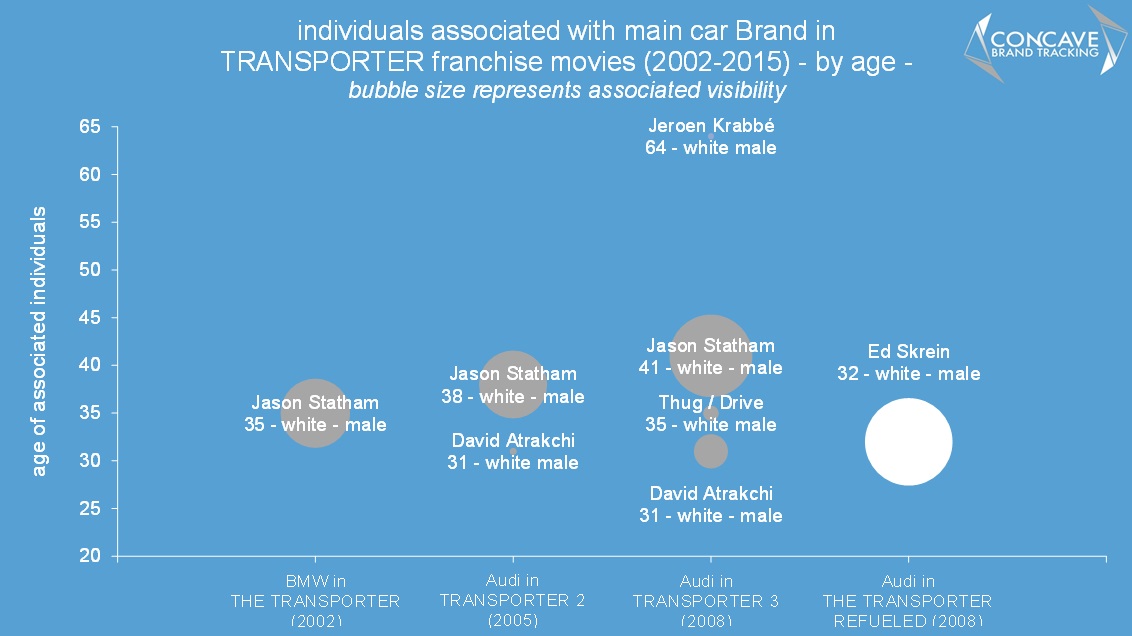 As the chart above shows, though Ed Skrein is one of the more youthful actors to use an Audi on screen in recent years, he is not quite the youngest. Rila Fukushima and Thandie Newton were both 28 when they drove Audis in THE WOLVERINE (2013) and MISSION: IMPOSSIBLE II (2000), respectively. They were also 2 of the few females to be highly associated with Audi. They both also happened to be some of the rare non-white Audi drivers in movies. Our chart shows that of the 10 individuals most associated with Audi in our database’s movies, beyond the two aforementioned females, the only non-white individual is Will Smith.

This white male demographic trend is confirmed by Concave Brand Tracking’s analysis of yearly top 10 movies from 2003 to 2013. In that sample, 92% of Audi drivers were male and they were white in 99% of the Brand’s screen time. However, as a 32 year old, Ed Skrein is below the average age of individuals associated with Audi, 42. 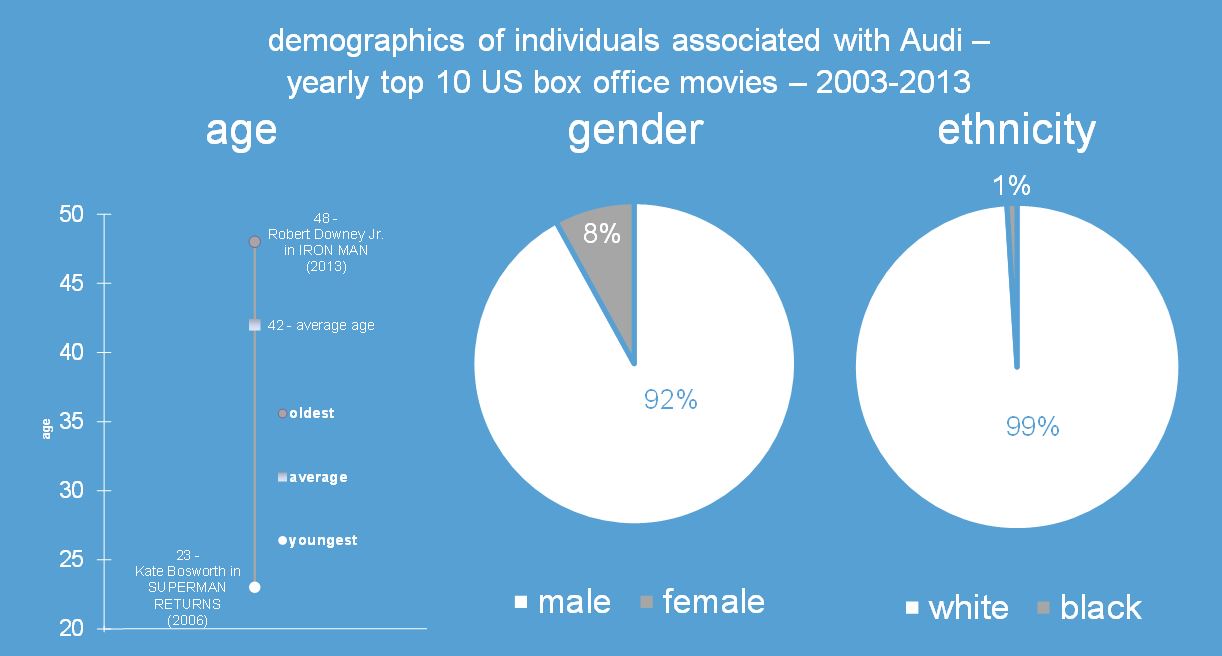 An important aspect of Brands in entertainment is the context in which they appear. This includes both where they are shown and how they are used. A bottle of champagne being served at a black tie event will be remembered very differently from one being chugged at a college party. Similarly a car being used in a government convoy will seem quite different from one being used to pick up kids from school.

While the differences in Audi’s portrayal across the TRANSPORTER movies are not as extreme as the above examples, there are some interesting ones.

When Brands appear in entertainment they receive certain associations. These can come from the location in which they appear but are mostly due to how the products are used. A camera used by a journalist will be remembered as professional. A watch worn with a tuxedo will be seen as formal. A car charging of a bridge will be associated with speed, power and stunts.

Unsurprisingly, the top association for the starring cars Brand across all 4 TRANSPORTER movies is transport. This includes transporting packages, people and sometimes even people in packages. In THE TRANSPORTER REFUELED (2015) the 2nd most common association is technology. While this association did appear in the previous movies, it never occurred as frequently or for as much screen time as in the latest movie. Ed Skrein is seen controlling his car with a mobile phone in the opening sequence and even sets it to drive itself later on in the movie.

While technology has become a much more important aspect of Audi’s portrayal in the TRANSPORTER franchise, speed and transport use remain its cornerstones. In terms of location however, Audi has gone from being shown as a long distance travel vehicle in TRANSPORTER 3 (2008) to a city vehicle in THE TRANSPORTER REFUELED (2015).

Now if we look at Audi’s broader portrayal in Concave Brand Tracking’s analysis of yearly top 10 movies from 2003 to 2013 we find both difference and similarities with what is seen in the TRANSPORTER franchise.

Firstly cities were by far the most common location with open roads and highways being the 2nd most common. This follows what is seen across all TRANSPORTER movies. 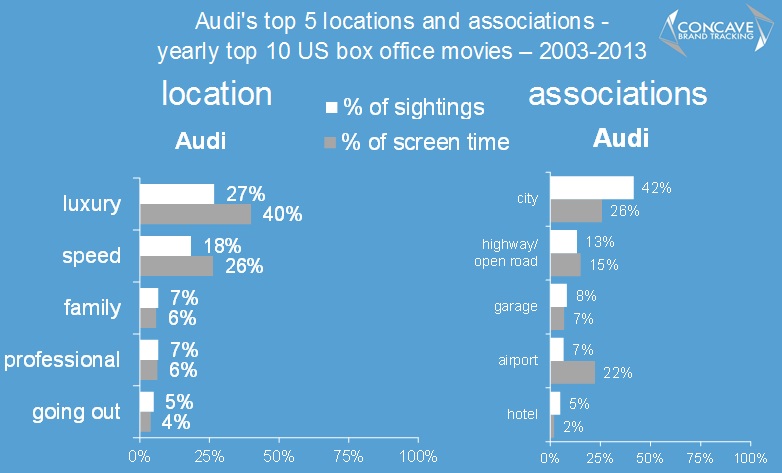 In terms of associations, speed is the 2nd most common one for Audi, occurring in 18% of sightings and 26% of screen time in yearly top 10 movies from 2003 to 2013. This confirms speed as an important aspect of Audi’s Brand portrayal. However we foundd luxury to be the most common association for Audi. This association was highly emphasized in all 3 IRON MAN movies and was furthered this year in FIFTY SHADES OF GREY. It is however completely absent in the TRANSPORTER franchise.

THE TRANSPORTER REFUELED (2015) continues its predecessors’ legacy of providing Audi with some of the highest visibility of any car Brand in the movie industry. From a demographic standpoint, Audi remains clearly targeted at white males, though Ed Skrein is amongst the youngest actors to star at the wheel of one of their vehicles.

THE TRANSPORTER REFUELED (2015) also continues to portray Audi as a fast and agile sports car with high speed chases and incredible stunts both in cities and on open roads. It also builds on its predecessors’ hints of technology to show Audi’s S8 as an almost futuristic car. However, the one Audi Brand value which remains absent in this latest TRANSPORTER movies is that of luxury.