Much like the original show, the movie was filled with brands. And given that it has also been an amazing hit for Netflix in terms of viewers, it has generated nearly 7 million dollars in product placement advertising value for brands.

Indeed, not only was EL CAMINO well received by critics (94% on rotten tomatoes) but Concave Brand Tracking conservatively estimates that over 16 million viewers globally watched the movie in the first five days it was online. This figure, along with the advertising value received by the brands, will only go up in time, as more and more people watch and re-watch the movie.

note: This audience estimate is based on a variety of factors including past Netflix viewership data, theatrical movie performances and audience engagement on reviewing sites.

Check out our video review of the brands in EL CAMINO below.

Nearly 50 different brands appeared or were mentioned in the movie. They varied from regular brand integration products like cars and beers to less common ones such as vacuum cleaners and fragrances.

These brands combined for over 45 minutes of screen time. Once we factor in product discernibility and logo/name visibility, this resulted in just under the amount of total product placement visibility in SPIDER-MAN: FAR FROM HOME (2019) and about 18% more than in COLD PURSUIT (2019). 2019 movies with far more product placement than EL CAMINO include LONG SHOT and WHAT MEN WANT.

A Netflix representative informed Concave Brand Tracking that none of the placements in EL CAMINO were paid for. This means that all these brand appearances were either organic integrations or the brands merely facilitated or authorized them.

The following is a closer look at the top 10 product placement brands in EL CAMINO: A BREAKING BAD MOVIE.

Spoiler warning: There are some minor storyline spoilers in order to describe when brands were seen and in what context.

Another vacuum brand that can be seen in the background behind Robert Forster during his extended exchange with Aaron Paul in the vacuum shop.

In one of the first scenes, Badger (Matt Jones) and Skinny Pete (Charles Baker) can be seen playing on an Xbox console with Xbox controllers. Though the brands’ logo is not seen, it gets a combined minute and 44 seconds of screen time. In this same scene, Badger can be seen with a 7-Eleven Super Big Gulp drink.

In a later scene, a bunch of guys have themselves a little party to celebrate running into some big money. The set features a bottle of Jameson, cans of Miller Lite, Bud Light and Budweiser. But no brand in this scene is more visible than Pabst Blue Ribbon. As well as having cans discreetly scattered around the room, a box on which the Pabst logo is visible can be seen. Finally, one of the main antagonists drinks from a Pabst Blue Ribbon can during a pivotal moment in the scene.

While Pabst Blue Ribbon is not the most common beer brand to appear in movies, it did appear in seven of 2018’s top 100 movies including VENOM, GAME NIGHT and I FEEL PRETTY.

Dyson was the most visible vacuum brand in EL CAMINO: A BREAKING BAD MOVIE. The scene actually opens with a shot of a customer considering the purchase of a Dyson DC07 which is very recognizable with its bright red and purple “paint job” as she puts its. While she does not end up buying it due to the hefty price tag, Robert Forster’s character comments “Yes, I agree. It’s very expensive. But it’s a fine product”. More Dyson products are seen throughout the store and even a sign advertising Dyson “Sales & Services”.

All in all, this earned the British vacuum brand nearly $300,000 in advertising value in the first five days of the movie’s broadcast.

So far, all brands on this list appeared in a single scene. Panasonic is the first that appeared in more. Indeed, we first see a Panasonic TV when Jesse turns on the news and see his parents talking to the press.

Panasonic also appears in the aforementioned party scene in the form of a Hi-Fi system. These two appearances combine for a minute and 39 seconds of screen time.

Panasonic was the 44th most visible brand in 2018 movies. It appeared in 13 of the top 100 movies, including VENOM, JURASSIC WORLD: FALLEN KINGDOM and RAMPAGE.

Ford vehicles appeared in many scenes ranging from police cruisers, to an F-Series Super Duty tow truck or the truck driven by Robert Forster’s character. All in all, this earned Ford over four and a half minutes of screen time which generated $681,000 million dollars in advertising value.

A Ping golf jacket was worn by Aaron Paul in a few scenes near the end of the movie. Between the brand getting three and a half minutes of screen time and its logo being visible, it received over $700,000 in marketing exposure.

While it came close, the titular vehicle was not quite the most visible brand. Chevrolet got the lion’s share of its exposure in the form of the infamous 1981 El Camino. A 2003 Silverado is also seen in passing, as is a police Suburban. The brand got over five minutes of screen time, more than any other, and was associated with three of the main actors: Aaron Paul, Jesse Plemons (as Todd) and Charles Baker (as Skinny Pete).

Chevrolet is also one of the most common product placement brands in film. In 2018 it was second only to Ford in terms of car brands and the 5th most visible brand overall.

While Chevrolet was not the most visible brand in EL CAMINO it can take solace in being the most visible active brand. Indeed, the big product placement winner of the movie is the now-defunct GM brand, Pontiac. It had three and a half minutes of screen time but edged out Chevrolet by having its logo visible in some scenes and being mentioned twice in the dialogue (Chevrolet was mentioned once).

Though Pontiac has been out of business since 2010, its vehicles continue to appear in TV and film. Indeed, the BREAKING BAD series featured a number of Pontiac vehicles including the 1980s Fiero which is also in EL CAMINO and the unmistakable 2004 Aztek SUV.

In 2018, Pontiac also appeared in over 15 movies including GREEN BOOK, READY PLAYER ONE and BOHEMIAN RHAPSODY. 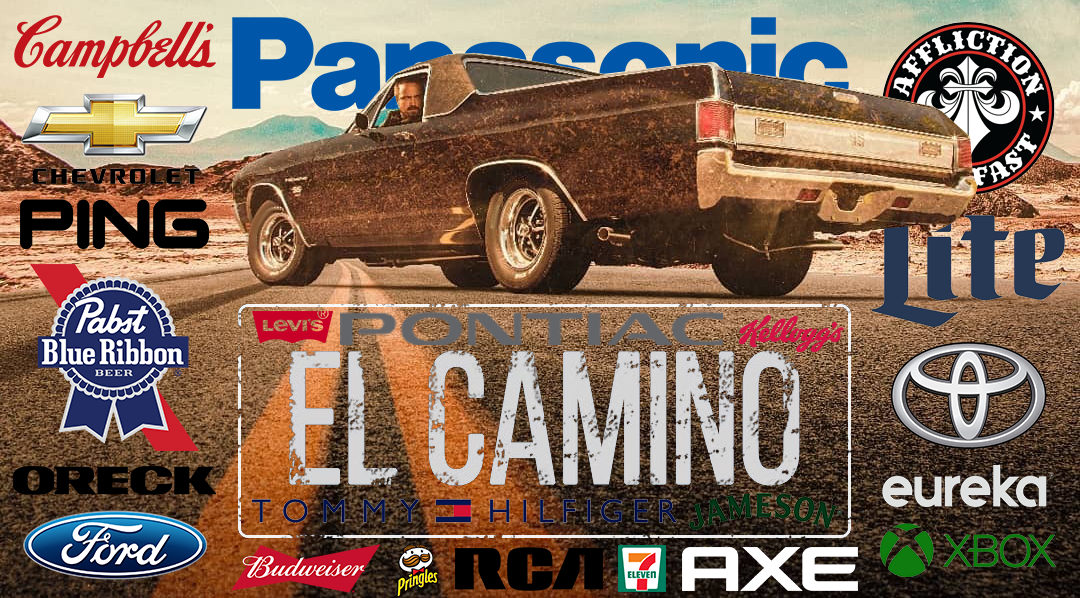