On Tuesday, the 4th February 2014 THE DAILY SHOW WITH JON STEWART‘s guest Elisabeth Banks made an appearance promoting her upcoming movie THE LEGO MOVIE.

To see the video of the interview click here.

“Help me up!” are the first words she uttered as the crowd applauded her entrance.  Is the platform on Jon Stewart‘s show particularly high you ask?  No, but Mrs Banks was appearing on the late night comedy news show wearing a pair of Louboutin heels that she struggled to walk in, as she was very eager to share. 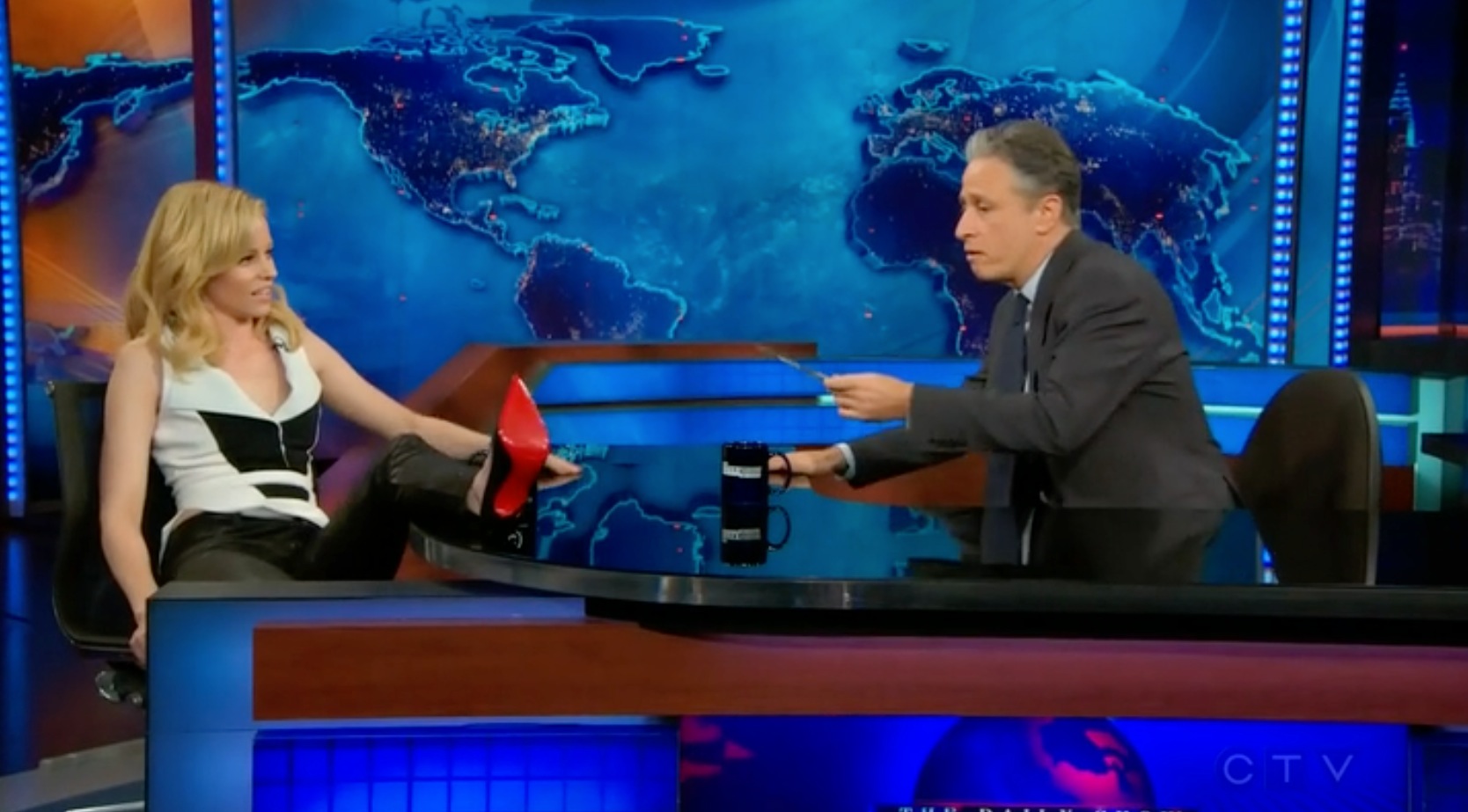 Before the interview began she tossed a leg onto Jon Stewart’s desk, clearly showing her black red-soul shoes and vented:
“They’re so high…these are the dumbest shoes! Why am I wasting my time walking out in these?”
But as she throws her leg onto Jon Stewart’s desk for the second of third time she gave a careful eye to her cleavage saying “Better watch it”, to which Jon Stewart observantly said “both of those things are working together.”

The the interview began with a poignant  first question by Jon, “What is the the time limit you think you could get around walking on one of those bad boys?” To which she quickly responded “I could barely make it down the hall!”
She continued: “I’m like a mom now, I don’t walk around in these, look at these stupid things” and joked “Yeah, I do house work in these.”
Banks then joked that her shoes were so sharp you could stab someone in them, before Jon Stewart jokingly replied that they belonged in “the Moulin Rouge.”
Ultimately, the 39 year old actress explained, “I did it for you Jon, I wanted to look sassy for you,” to which Jon emotionally expressed how touched he was that someone would “make themselves terribly uncomfortable” for him.
The conversation was so focused on her shoes that ultimately producers had to give the shoes their moment of glory with a 3 second close up: 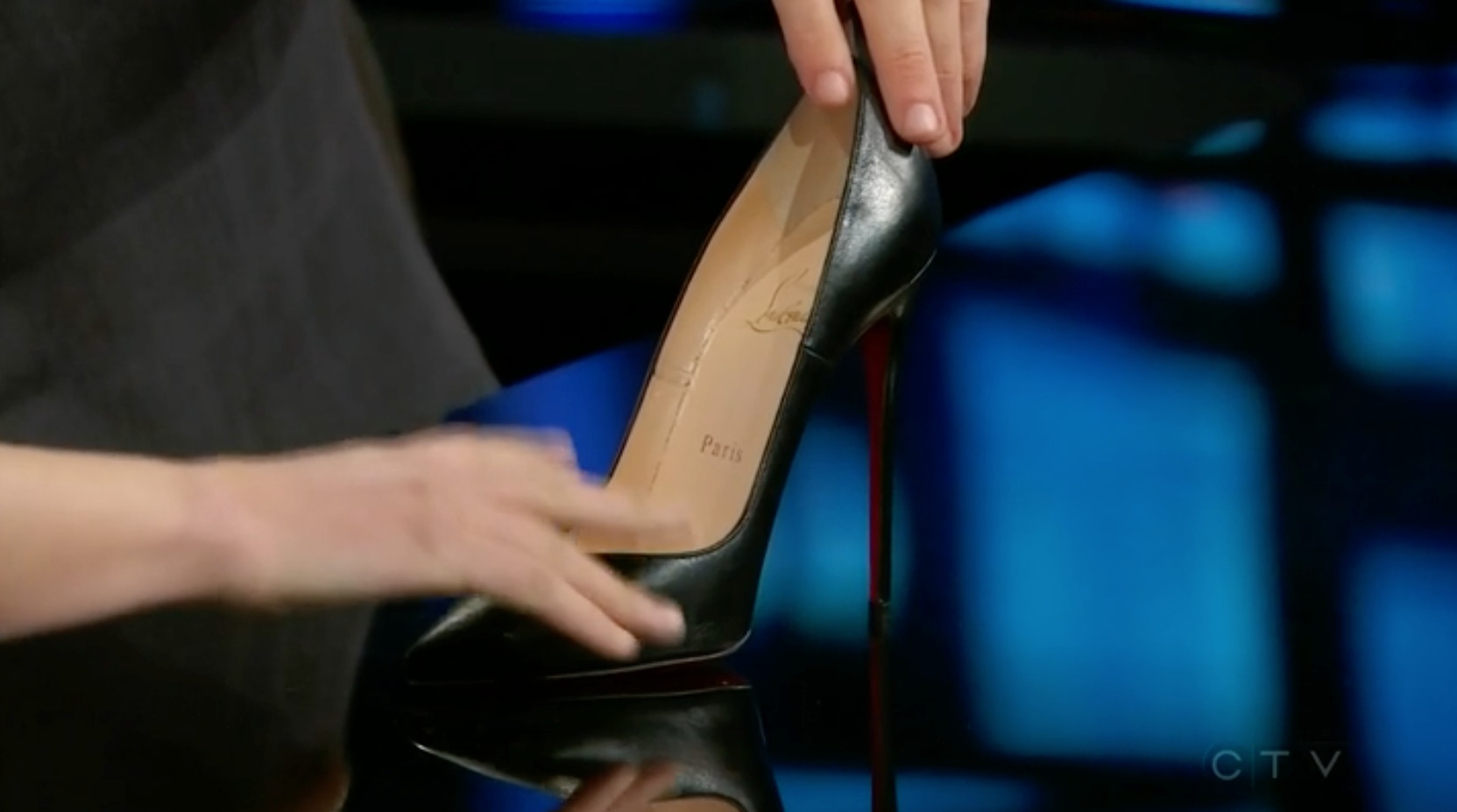 Over 1 minute into the 5 minute interview, the movie Banks is meant to promote finally came up.  The interviewer and interviewee made their best effort to fain interest in a movie based on plastic toys but it quickly led to them talking about beavers.  The footwear topic was then brought back by Jon Stewart on the back of a sexual joke by Banks: “This would never happen is she was wearing espadrilles.” Before long Banks plonked her red-souled shoe back on the desk explaining that they are definitely not espadrilles.

Ultimately, THE LEGO MOVIE, despite its 30 second trailers shown before the interview and the 1 minute of conversation that was dedicated to it, clearly lost the limelight of the guest appearance to Banks’ Louboutin shoes. They were discussed two separate times, adding up to almost a third of the interview and were recognisably on screen for 1 minute and 23 seconds as well as their aforementioned 3 second close-up.  Whilst the name Louboutin was not actually mentioned they are by far the most recognisable Brand of high heel with their trademarked red-sole and the logo/name visible in the close up.

So what did this appearance say about the Louboutin Brand?

On the surface it was not a glowing endorsement of Christian Louboutin footwear as they were referred to as uncomfortable, hard to walk in and sort of ridiculous.  However, under the surface, the fact that Banks wore these shoes for her TV appearance, and did so,  in her words “to look sassy” and to impress her male host is definitely in line with the Brand’s image of sophistication, luxury, glamour and, let us not forget sexyness.  The association between Banks’ cleavage and the shoes as well as her sexual innuendo joke being brought back to her footwear suggests that the shoes are the source of her undeniable sex appeal and charm.