The ENTOURAGE (2015) movie is out in theaters, and much like the TV series, it is full of Brands. So full in fact, that it might be one of the most Brand-filled movies of all time.

Concave Brand Tracking recorded every single Brand that appeared in ENTOURAGE (2015) along with an array of exposure metrics. With this information, we calculated a total Brand exposure score for the movie that factors the number of Brands, how much screen time they received, whether their logos or names were visible and how prominent their products were.

The most Brand-filled movie ever?

According to the above methodology, ENTOURAGE (2015) gave Brands more total exposure than any movie in Concave Brand Tracking’s database. This includes all top 10 US Box Office movies as far back as 2003, the top 50 movies at the 2014 US Box Office and numerous 2015 blockbusters such as FURIOUS 7 (2015) or AVENGERS AGE OF ULTRON (2015).

Disney’s 2006 animated movie, CARS, was the most Brand-filled movie in our records, largely due to the fact that almost all its characters were based on real-life cars.

The TRANSFORMER movies are renowned for their excessive product placement. Still, ENTOURAGE (2015) has almost 20% more total Brand exposure than TRANSFORMERS: AGE OF EXTINCTION (2014) and over 4 times as much as TRANSFORMERS: REVENGE OF THE FALLEN (2009).

Finally, it is important to note that ENTOURAGE (2015) is only 105 minutes long, while many of the movies we are comparing it to are well over 2 hours. So, not only does ENTOURAGE (2015) contain more Brand exposure than most other movies, it does so in much less time.

What sort of Branded products?

ENTOURAGE (2015) features well over 70 Brands in the form of products ranging from cars to bongs.

The chart below shows exactly what types of Branded product got the most amount of Brand exposure. 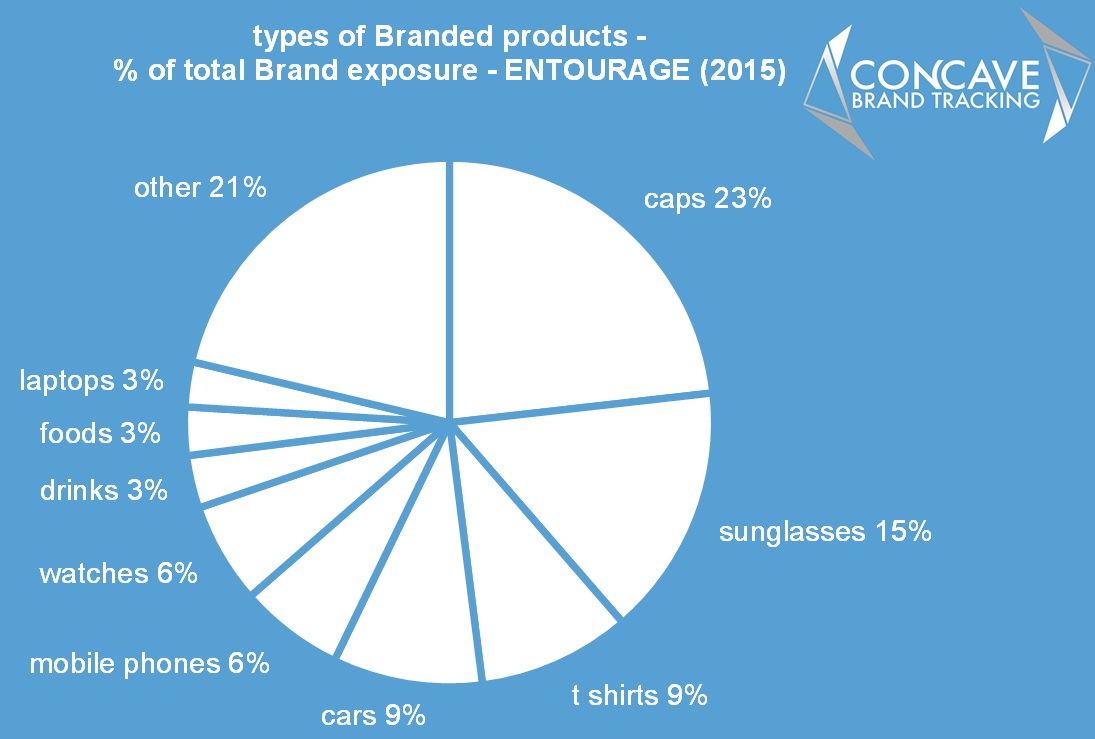 As we can see, caps were the most visible type of Branded products followed by sunglasses, t shirts, cars, mobile phones and watches. All these products had between 23% and 6% of the total amount of Brand exposure.

While a large number of Brands feature in ENTOURAGE (2015), Concave Brand Tracking‘s methodology allows us to rank the most visible ones. This ranking factors in screen time, logo or name visibility and product discernibility.

This top 10 is made up of Brands we find throughout the movie as well as some that only appear in a couple of scenes but in a very visible way.

Apple features prominently in many movies – PITCH PERFECT 2, most recently – but we have wondered whether it would ever do so for longer than in MISSION: IMPOSSIBLE – GHOST PROTOCOL (2013), in which it infamously had over 6 minutes of screen time. This has now occurred. Apple products had over 8 minutes of screen time in ENTOURAGE (2015).

While this translates to a huge amount of exposure, it is worth noting that Apple’s logo is only seen in about 40% of its overall screen time in this movie. As a result of this, as well as the discernibility of the products, Apple did actually get slightly less Brand exposure in ENTOURAGE (2015) than in MISSION: IMPOSSIBLE – GHOST PROTOCOL (2013).

Apple was also omnipresent throughout the 8 seasons of the TV show, so its substantial presence in the movies should come as no surprise.

Throughout much of the movie, Turtle – played by Jerry Ferrara – wears a New Era MLB New York Yankees cap, much as he did in the TV series.

Throughout much of the movie Turtle – played by Jerry Ferrara – wears a New Era MLB New York Yankees cap, much as he did in the TV series.

note: If ranked separately, MLB would have been the 3rd most visible Brand and New Era the 5th.

Despite Apple having over 8 minutes of screen time, this was not the most out of all the Brands in ENTOURAGE (2015). With almost all the main characters wearing their timepieces throughout the movie, Audemars Piguet clocked over 10 minutes of screen time. However, it only ranks as the 3rd most visible Brand as it is only ever seen discreetly and its logo is almost never shown.

The luxury watch Brand featured prominently in the TV show but is consistently worn by Kevin Connolly, Kevin Dillon, Jerry Ferrara and Jeremy Piven throughout the feature film.

With the 3 Brands above all having ties with the TV show, it should come as no surprise that Avión Tequila also makes the top 5. Though Apple, the New York Yankees and Audemars Piguet were present in the show, Avión actually had its own storyline.

As such, Avión can be seen in various scenes in the form of bottles, crates and a t shirt worn by Mark Cuban. The Dallas Mavericks owner plays himself in the movie and wears the t shirt as a reference to him having been a major stakeholder in the tequila Brand within the series.

AQUAHydrate is the first Brand in this ranking to not have appeared in the TV show, though it does have an organic connection with the series.

AQUAHydrate is a Brand of bottled water co-owned by Mark Wahlberg. As well as having a cameo in the movie, Wahlberg is one of the movie’s producers and was an executive producer for the TV series. Furthermore, the whole idea of ENTOURAGE is loosely based on his own Hollywood experience.

So while AQUAHydrate never featured on the TV show, it appears in the movies very much due to Wahlberg’s involvement. The Brand appears in the form of bottles, which can be seen discreetly in various scenes, as well as caps worn by Wahlberg himself and his fellow WAHLBURGERS cast member; Henry the Hamster.

The mascot of the ENTOURAGE TV show was arguably Johnny Drama’s Lincoln Continental, but it quickly became over shadowed by Hummers, Cadillacs, Maseratis and Aston Martins, to name a few of the luxury cars that the crew drove throughout the 8 seasons of the show. The Lincoln does appear in the movie but is once again overshadowed, this time almost entirely by Cadillac, which Concave Brand Tracking finds to be the 6th most visible Brand in ENTOURAGE (2015).

The guys are initially seen cruising in a 2015 Cadillac Escalade but later on Vince is given a Cadillac Ciel, which becomes their go-to ride.

Between these 2 vehicles and a couple of background Cadillac appearances, the Brand racks up almost 1 ½ minutes of screen time with its logo visible almost 80% of the time.

The Brand is highly associated with luxury lifestyle of Vince and the guys.

Cadillac is yet another Brand appearing in the movies following an extensive presence in the TV show.

As one would expect, many parties occur in ENTOURAGE (2015), much as they did in the TV show, and while Avión features at many of them, Budweiser is the drink seen in most people’s hands.

We get glimpses of Beck’s and Stella Artois, but Budweiser receives almost 3 minutes of screen time. However, most of it is quite discreet, making Budweiser the 7th most visible Brand in ENTOURAGE (2015).

Budweiser was also a regular Brand in the TV series.

At #8 we find the Muhammad Ali line of clothing which is worn repeatedly by Jerry Ferrara.

This Brand seems to have no previous connection to the ENTOURAGE family. It was, however one of the few Brands to have been thanked in the closing credits, along with Mentos.

All the Brands we have seen above appeared in multiple scenes, but Ferrari owes its position as the 9th most visible Brand to a single sequence.

After sending the Cadillac Ciel to Vince as a congratulatory gift, Ari Gold – played by Jeremy Piven – treats himself by driving to work in a Ferrari 458 Spyder. While the car only gets about 45 seconds of screen time, its logo is seen throughout and it is shown in both close-ups and obvious shots.

During much of the rest of the movie, Jeremy Piven is seen driving a 2014 S-Klasse Mercedes-Benz.

Ferrari was much less woven into the ENTOURAGE TV show than Brands such as Avión, Cadillac or the Yankees, but it did appear quite frequently in various seasons.

Nike, Under Armour, Air Jordan and Puma all make appearances in ENTOURAGE (2015), but the only sportswear Brand that cracks the top 10 is Jaco Clothing. Much like Ferrari, the Brand only appears in a single sequence, but in doing so, gets almost 50 seconds of screen time in which it is clearly seen along with its name and logo.

Jeremy Piven wears the Jaco compression top – along with Under Armour shorts – early on in the movie while on a morning run.

While the movie is filled with Brands here are just few more we thought we would mention:

–       Beats by Dre follows up its significant role in PITCH PERFECT 2 (2015) with a small appearance in the excerpts of the movie within the movie that the plot revolves around. As such, they are worn by Adrian Grenier as a professional DJ.

–       As we mentioned, Jeremy Piven is often seen driving a Mercedes-Benz.

–       Haley Joel Osment drives a Lamborghini, which is also mentioned in the dialogue.

–       Chevrolet appears both as Ronda Rousey’s Corvette Stingray and Jeremy Piven’s Tahoe when he visits Billy Bob Thornton in Texas.

–       Moët & Chandon appears significantly in one of the final scenes at the Golden Globes.

–       Grinder, Lamborghini, Instagram, Air Jordan and Uber all get mentioned.

–       Puma is worn both by Rex Lee as Lloyd in the gym and by Thierry Henry as he casually walks his dog.