STRAIGHT OUTTA COMPTON (2015) is the musical biopic of the infamous Los Angeles rap group, N.W.A. One of the movie’s main objectives was to accurately recreate the environment in which the young artists rose to prominence. As such the movie was mostly filmed in Los Angeles, was produced by some of the real life members of the group, features the real music and even stars the son of one the actual members. Another aspect critical to faithfully recreating the look and feel of N.W.A’s rise to stardom was their outfits. Much like the real N.W.A, the main cast wears black and white sports gear throughout most of the movie.

All screenshots from STRAIGHT OUTTA COMPTON (2015) come from trailers or other promotional materials and are the property of Universal Pictures. 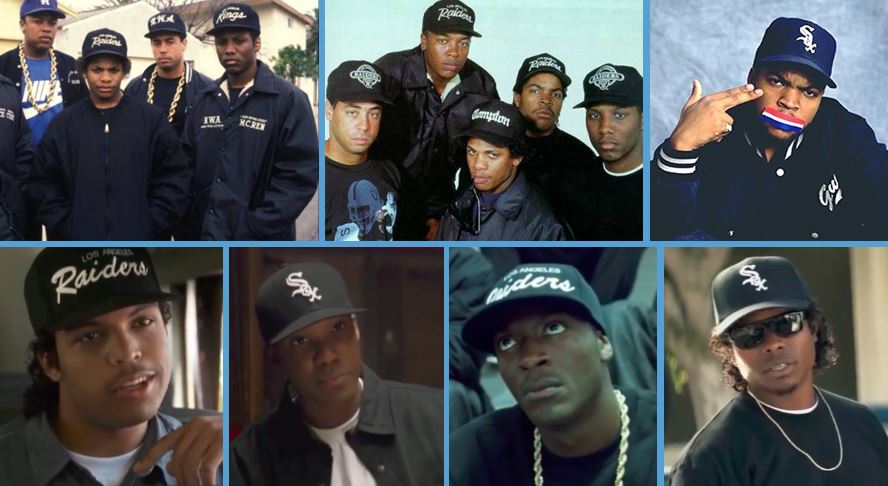 Due to this choice of wardrobe there are few scenes in the movie where a Raiders t shirt, and Chicago White Sox cap or a Los Angeles Dodgers jersey are not seen. The result of this is that STRAIGHT OUTTA COMPTON (2015) is one of the most Brand-filled movies of all time.

Concave reported during the summer that ENTOURAGE (2015) – which was filled with product placement – had become the live-action movie with most Brand exposure in our database. STRAIGHT OUTTA COMPTON (2015) blows ENTOURAGE (2015) out of water and has almost twice as much Brand exposure as THE LEGO MOVIE (2014), a movie entirely about a Brand. As the chart below shows it also beats other Brand-filled movies such as LET’S BE COPS (2014), TRANSFORMERS: AGE OF EXTINCTION (2014), GONE GIRL (2014) and most recently, SOUTHPAW (2015).

From an analytical standpoint there are multiple reasons for this achievement. The first is the length of the movie. STRAIGHT OUTTA COMPTON (2015) clocks in at 147 minutes or 2 hours and 27 minutes. While this is less than TRANSFORMERS: AGE OF EXTINCTION (2014) or GONE GIRL (2014) it is far more than most movies. However, in the chart above we also showed the total Brand exposure adjusted for running time. With this metric the gap between STRAIGHT OUTTA COMPTON (2015) and the other movies narrows. But even when factoring in running time, the gangster rap biopic is still head and shoulders above all other movies in terms of Brand exposure.

If we look at just the amount of Brand screen time we find that STRAIGHT OUTTA COMPTON (2015) has over 2 hours and 20 minutes of aggregated Brand screen time. This is far more than any other movie in our records.

Aggregated screen time means that if 2 different Branded products are on screen for the same 10 seconds, it counts as 20 seconds of Brand screen time. 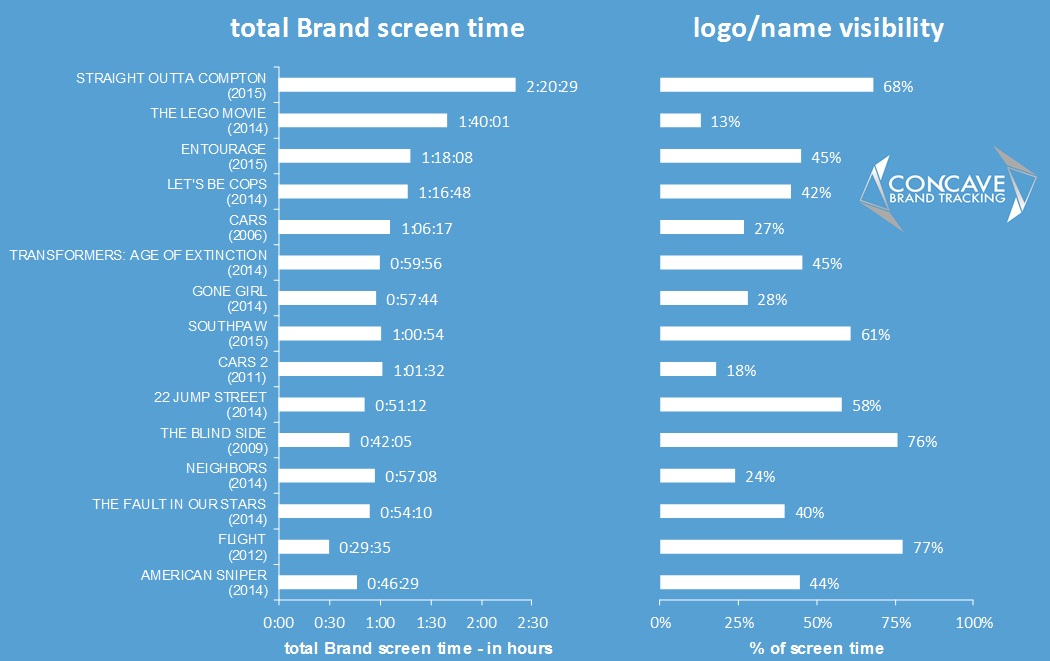 The above chart also shows that, while not at the level of THE BLIND SIDE (2009) of FLIGHT (2012), Brand logo/name visibility in STRAIGHT OUTTA COMPTON (2015) is very high. In 68% of Brand screen time products featured the logos or names of their manufacturers.

In terms of product discernibility, STRAIGHT OUTTA COMPTON (2015) has less products shown discreetly or in the background than average, but also very few close-ups. Overall, most Branded products were just shown subtly. This means they were clearly visible but not given particular attention.

So which Brands benefited the most from this exposure? 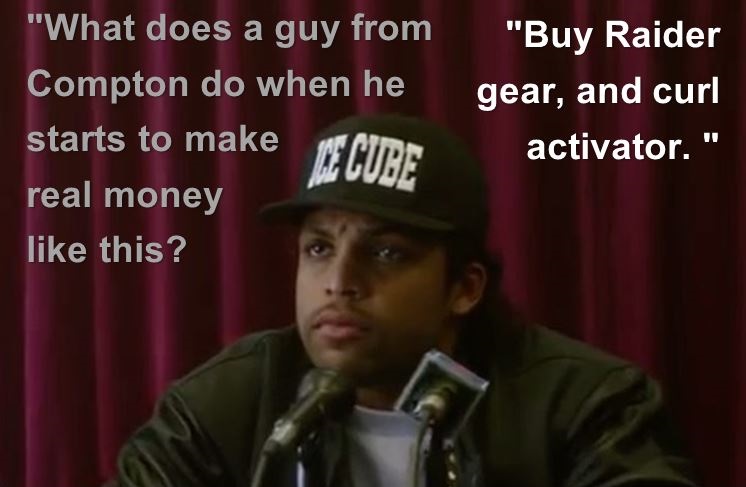 Other notable Brands which did not make the top 10 included Chevrolet, whose 1964 Impala is both widely seen and mentioned. The Dr. Dre character starts of the movie with a sad looking Datsun car, but later upgrades to a 1987 Ferrari Testarossa. The police cars are mostly Ford and Chevrolet. Suge Knight is shown driving a vintage Cadillac at the height Death Row Records’ success.

Clothing from Fila, Air Jordan, Karl Kani, Stitches, the New York Yankees, the Los Angeles Lakers and others also appear. One notably absent clothing Brand is the NFL. Thought the cast are seen in football jerseys, none of them have any logos on them, either of teams or the league itself. It seems very likely that the NFL requested not to feature due to what they might have perceived as a negative portrayal.

Kangol hats are seen and then mentioned in association with LL Cool J and hip hop in general.

Plenty of alcohol Brands are seen. They include St. Ides and Colt 45 malt liquor, Old Milwaukee beer, Jameson whiskey and Martell cognac. Early on Eazy-E is seen brandishing a bottle of cognac, and though it resembles a bottle of Courvoisier, upon closer inspection we found it is simply Branded “Cognac”.

Finally, an interesting production choice is the fact that headphones Brands such as KLH, AKG and Sony are clearly identifiable throughout the movie. While Beats by Dre obviously did not exist back when the movie takes place, given Dr. Dre’s involvement with the project it would not have been surprising to see unBranded headphones or at the very least see the logos of Beats by Dre’s competitors covered up. But this is not the case. In one instance the Dr. Dre character is even seen wearing Sony headphone, with the logo clearly visible. Beats by Dre does however get a plug at the end of the movie when showing what the members of N.W.A have done since the era when the movie concludes. Beats by Dre headphones are shown being used professional by Kendrick Lamar as he records with Dr. Dre himself. They are then again shown in a CNBC news story announcing the 2014 sale of Beats by Dre to Apple.