Concave Brand Tracking combed through ZACK SNYDER’S JUSTICE LEAGUE, recording all the brands that appeared. We then compared this to the same data we collected back in 2017 for JUSTICE LEAGUE. On the one hand we found that the new version had a similar amount of brand integrations when accounting for the run time. However, the brands that stuck out the most did vary quite interestingly.

Firstly, it is important to consider that the Snyder Cut was 242 minutes vs. JUSTICE LEAGUE’s 120 minutes. In other words, the newer version is almost exactly twice as long.

Now, the 2017 version was not particularly brand heavy. 21 or the 50 highest grossing movies of 2017 had more brand visibility than JUSTICE LEAGUE. Brand visibility accounts for screen time and product discernibility but not the audience of a film. It quantifies how much exposure to brands any given viewer has.

JUSTICE LEAGUE featured 23 different brands. They shared a total of 22 minutes of screen time with an average quality of exposure (how discernible the product are) of 20%. 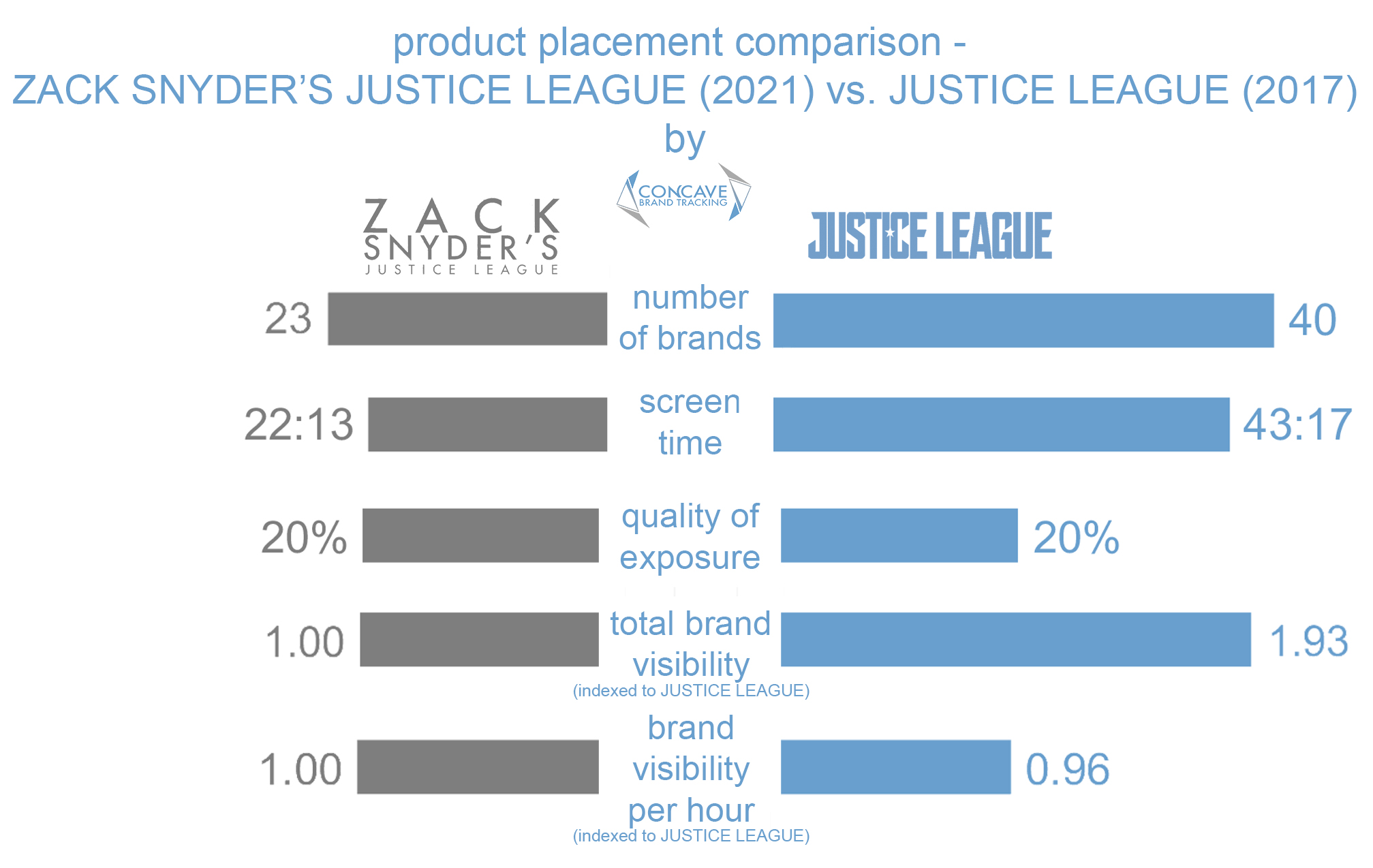 In comparison, ZACK SNYDER’S JUSTICE LEAGUE featured 40 brands for a total of 43 minutes and the same average quality of exposure. Overall, it had 193% the amount of brand visibility of the original version. This means that while the Snyder Cut has a lot more product placement than 2017’s JUSTICE LEAGUE, it actually has less if we account for the duration.

So which brands benefitted the most from this extra exposure and which, if any, lost out?

It is hard to call any brand a loser when a product placement partnership leads to appearances in two separate movies that millions of viewers see. However, the closest we can find to losers in the Justice League saga from a product placement point of view are brands that appeared in the original but did not make the second version, despite it being twice as long. This was the case for Honda and GM, although these appeared to be merely organic appearances. AT&T and Maybach, however, were clearly brand tie-ins that did not make the Snyder Cut.

Some brands appeared prominently in both versions but for slightly less screen time in the newer JUSTICE LEAGUE:

Finally, some brands appeared in both versions of JUSTICE LEAGUE but had far more visibility in Zack Snyder’s cut:

And by far, the biggest brand winner of the Snyder Cut was…UNDER ARMOUR!

Under Armour appeared briefly in 2017’s JUSTICE LEAGUE in just two scenes. First as a football in Cyborg’s home and then later as a pair his shoes. This amounted to under 30 second of screen time. 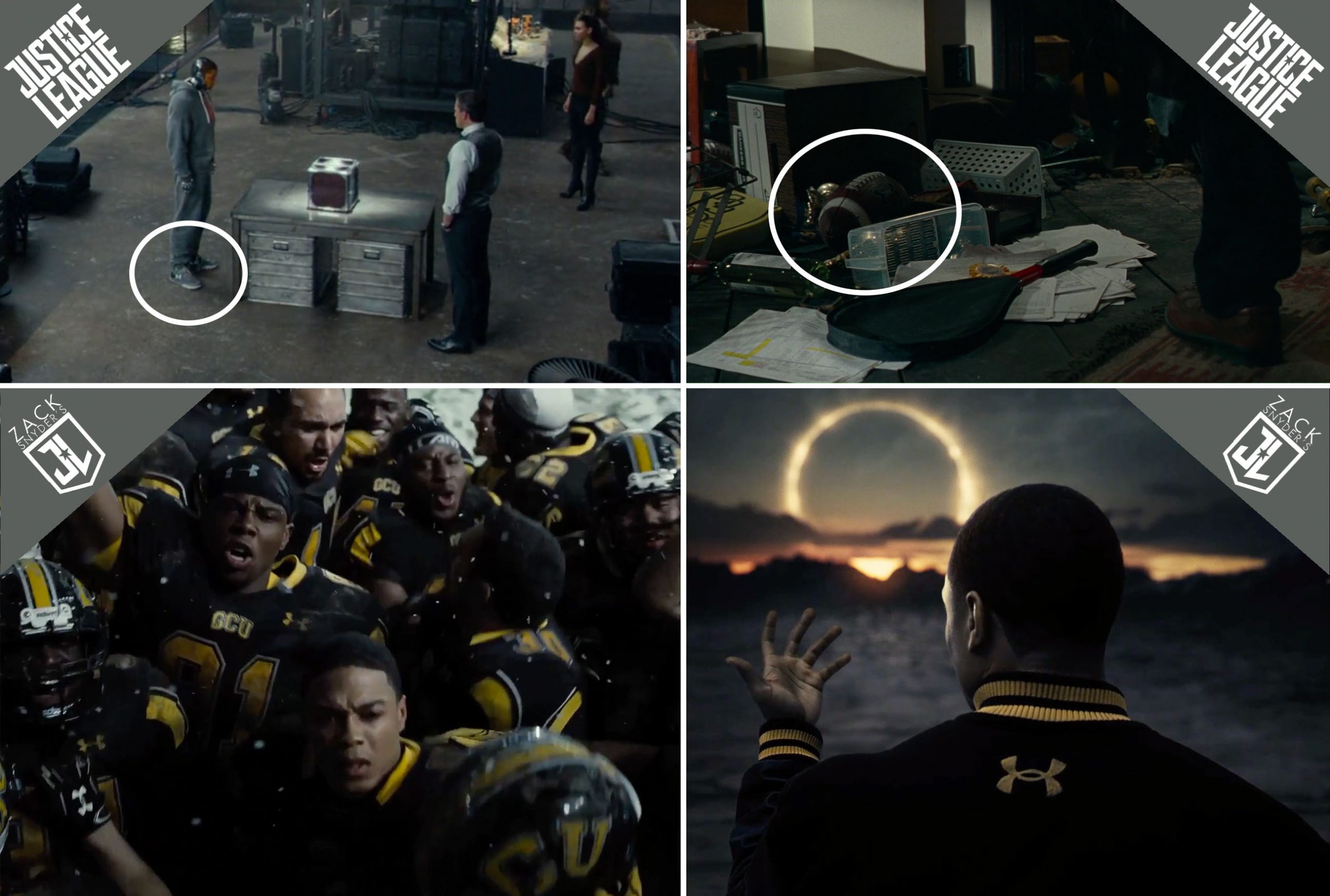 Much like Schutt and Sony, Under Armour benefited greatly from the Snyder Cut. Its screen time increased to over six minutes, the second-most behind only Samsung. This considerable increase was mostly due to Under Armour appearing in the form of football jerseys, gloves, shoes and bandanas in Cyborg’s football flashback. It  was also the brand of the letterman jacket he is seen wearing at various points in the movie. The Flash also wears a pair of Under Armour shoes in one of his new scenes.

None of the above scenes were included in the 2017 version. However, there is something strange in the part where Cyborg first meets Wonder Woman (played by Gal Gadot). A scene that features in both versions.  In the new cut he wears an Under Armour bag. Whereas in the 2017 cut there is no sign of a bag and Cyborg is wearing a tracksuit. This means that either Under Armour was removed in JUSTICE LEAGUE (2017) or digitally added in ZACK SNYDER’S JUSTICE LEAGUE (2021).

This unique episode in cinema history has shown how different movies can turn out depending on who’s at the helm. A small part of that, as we’ve explored in this article, is how these differences can affect product placement!