With TRANSFORMERS: THE LAST KNIGHT (2017), Michael Bay brings us the 5th instalment in the TRANAFOMERS series with everything we’ve come to expect: cars, action, explosions and product placement. 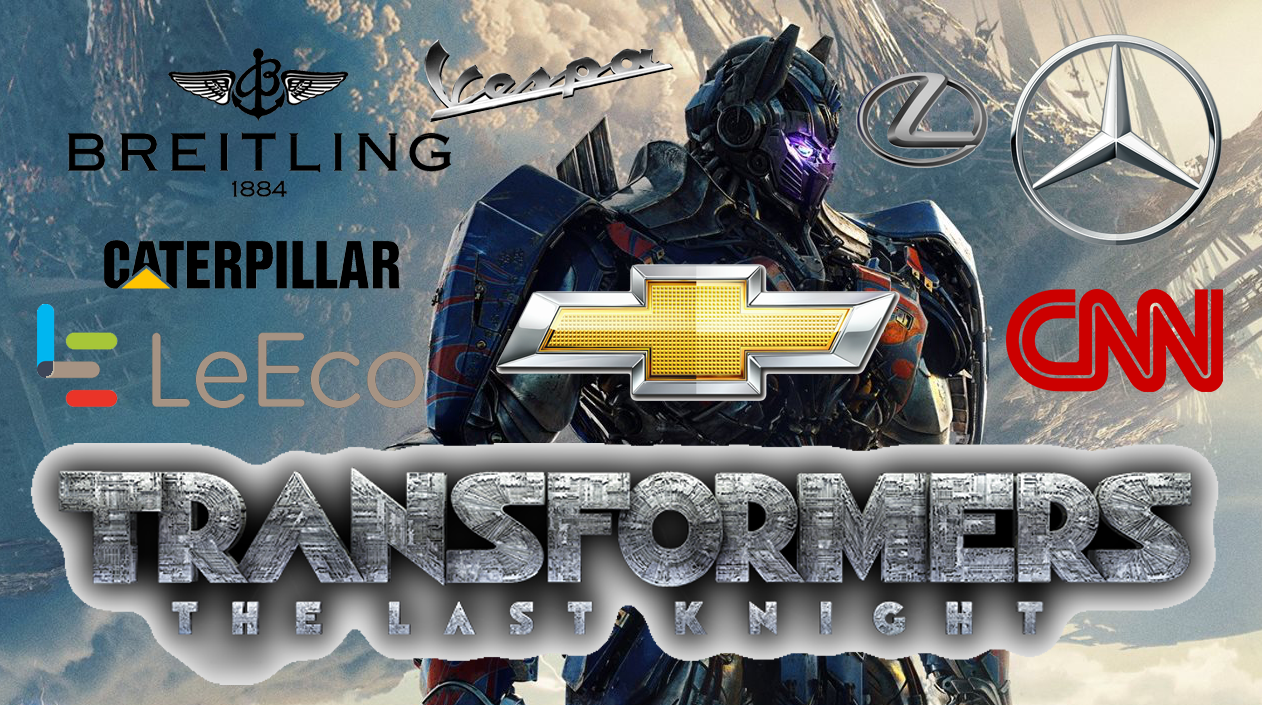 TRANSFORMERS: THE LAST KNIGHT (2017) opened with $69.1 million over its first 5 days of its release (including $45.3 million over its 3-day opening weekend). Using these box office figures, and our in-house valuation formula, Concave Brand Tracking has estimated how much advertising value each of the following 10 Brands got from being in the movie in its first 5 days of release.

At #10 we have the Chinese Brand LeEco. It appears in the form of mobile phones used by various characters throughout the movie.

LeEco, which was only founded in 2004, is a new Brand to the Hollywood product placement arena. It has not appeared in any other major American blockbuster to date.

While a relatively unknown mobile phone Brand being the handset of choice in a US blockbuster might be unusual in any other movie, it is very much in line with the TRANSFORMERS franchises’ product placement trends. Indeed, in the last few entries in the series we’ve seen such Chinese Brands as TCL, Shuhua Milk and China Construction Bank.

Throughout the movie, Mark Wahlberg wears a Breitling Cockpit B50 Night Mission watch. The Brand gets over 2 minutes of screen time. 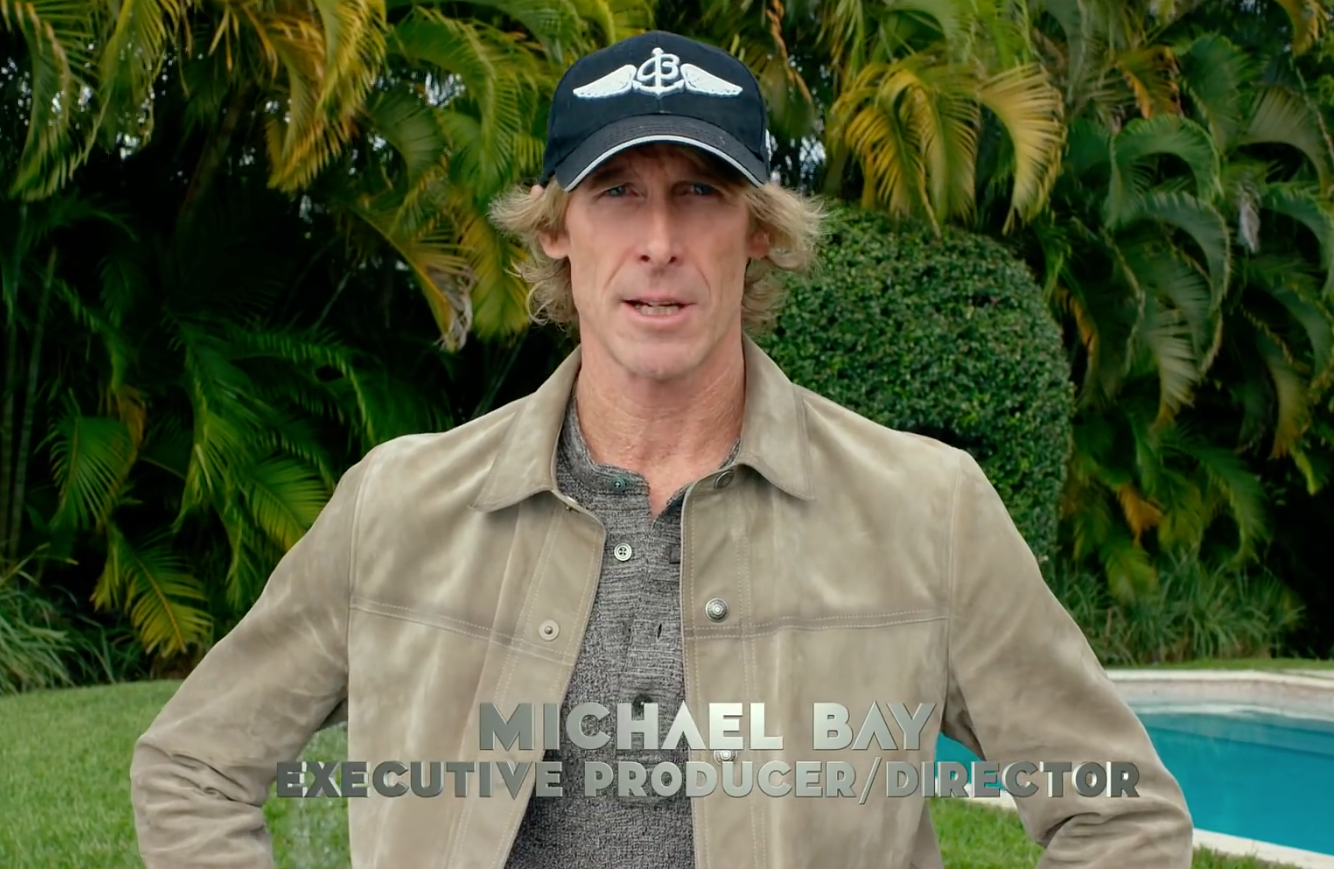 We can hypothesize that Breitling ended up in the movie due to a partnership with the movie’s director and producer, Michael Bay. This seems likely because in the behind the scenes featurette videos he can be seen wearing a Breitling cap.

While not a common product placement Brand, Breitling appears on the wrist of Michael Kelly (playing Doug Stamper) throughout HOUSE OF CARDS and has been worn by Forest Whitaker in TAKEN 3 (2014) and Leonardo DiCaprio in BLOOD DIAMOND (2006).

Appearing in the form of large flat screen TVs, Vizio had over 2 minutes of screen time in TRANSFORMERS: THE LAST KNIGHT (2017).

Vizio is not a widely known Brand but it has been making a name for itself via product placement. In the last few years its TVs could be seen in SUICIDE SQUAD (2016), BATMAN V SUPERMAN: DAWN OF JUSTICE (2016), HOT PURSUIT (2015) and VACATION (2015).

Mercedes-Benz has appeared in all 5 TRANSFORMERS, though its level of exposure has varied substantially. After being more of a background car Brand in the first 2 movies, in TRANSFORMERS: DARK OF THE MOON (2011), Mercedes-Benz was the 3rd most visible product placement Brand with a whopping 7 minutes of screen time. Most of this came in the form 2011 Mercedes-Benz SLS AMG.

In TRANSFORMERS: THE LAST KNIGHT (2017), Mercedes-Benz had almost 2 ½ minutes of screen time and lots of logo visibility, making it the 7th most visible Brand. The main model on show was the 2017 Mercedes-AMG GT R. 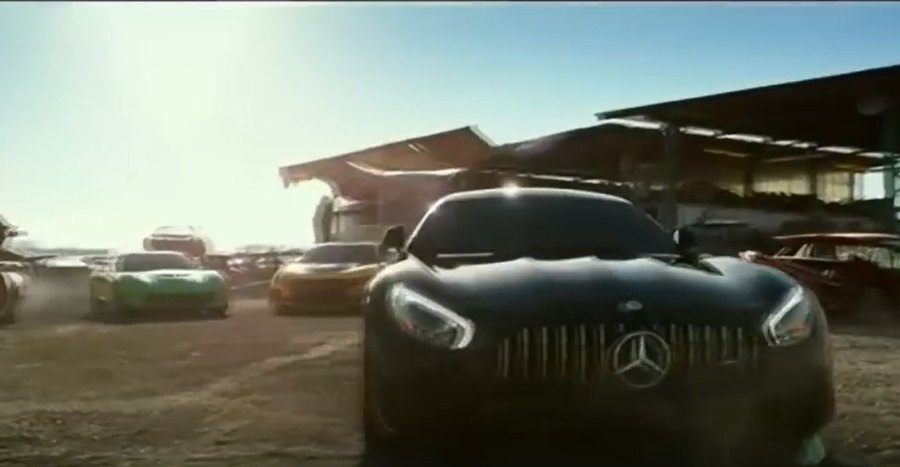 Mercedes-Benz is one of the biggest product placement Brands in the world. It came in at #14 in Concave Brand Tracking’s yearly Top 100 movie Brands ranking.

Ford has appeared in all previous TRANSFORMERS movies, but TRANSFORMERS: THE LAST KNIGHT (2017) marks its biggest product placement in the franchise in. This is mostly due to one of the main Decepticons taking the form of 2015 Ford Mustang Police Cruiser. This Deception previously took the form of a Saleen S281 – which is a modified Ford Mustang – in TRANFORMERS (2007). 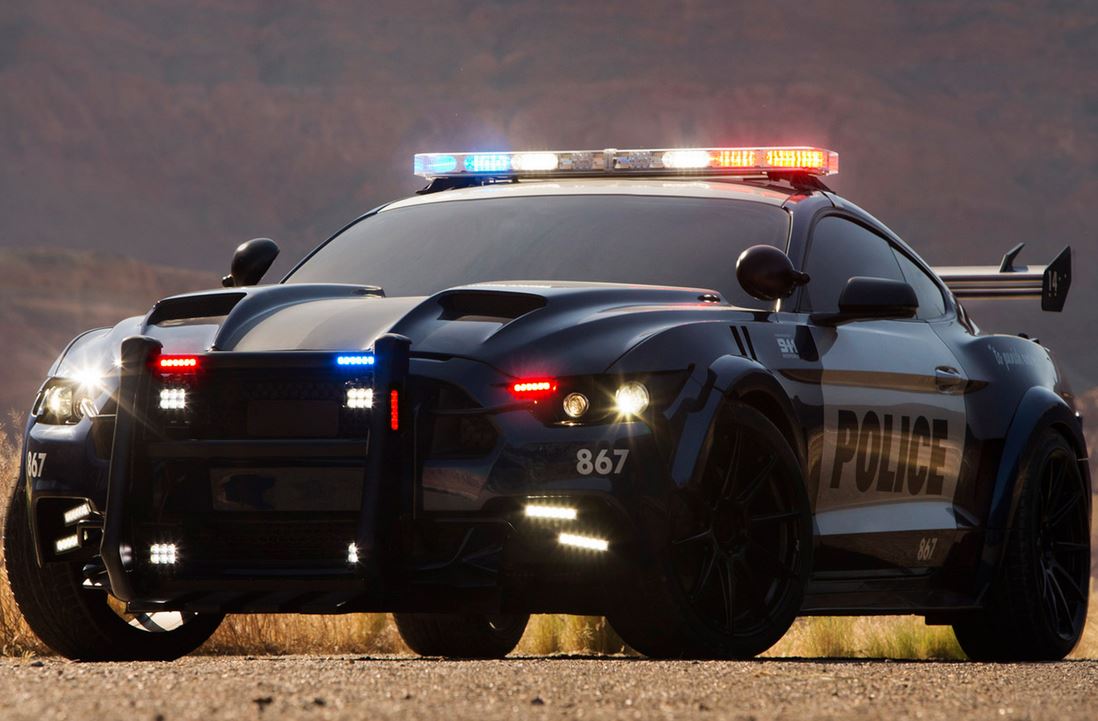 Ford is also one of the biggest product placement Brands in the world. It came in at #4 in Concave Brand Tracking’s yearly Top 100 movie Brands ranking overall and was the highest ranked car Brand.

TRANFORMERS movies often feature exotic luxury sports cars. Over the years these have included a 2008 Audi R8 in TRANSFORMERS: REVENGE OF THE FALLEN (2009), a 2011 Ferrari 458 Italia in TRANSFORMERS: DARK OF THE MOON (2011), a 2013 Bugatti Veyron Grand Sport Vitesse and a 2013 Pagani Huayra in TRANSFORMERS: AGE OF EXTINCTION (2014).

While Lamborghini did not make Concave’s Top 100 product placement Brands in movies for 2016 it has a long history of appearing in big Hollywood movies. The most recent case of this was in THE FATE OF THE FURIOUS (2017).

Appearing in the form Squeek the Transformer, Vespa got around a minute of screen time in which its logo was clearly visible, making it the 4th most visible Brand of the movie. 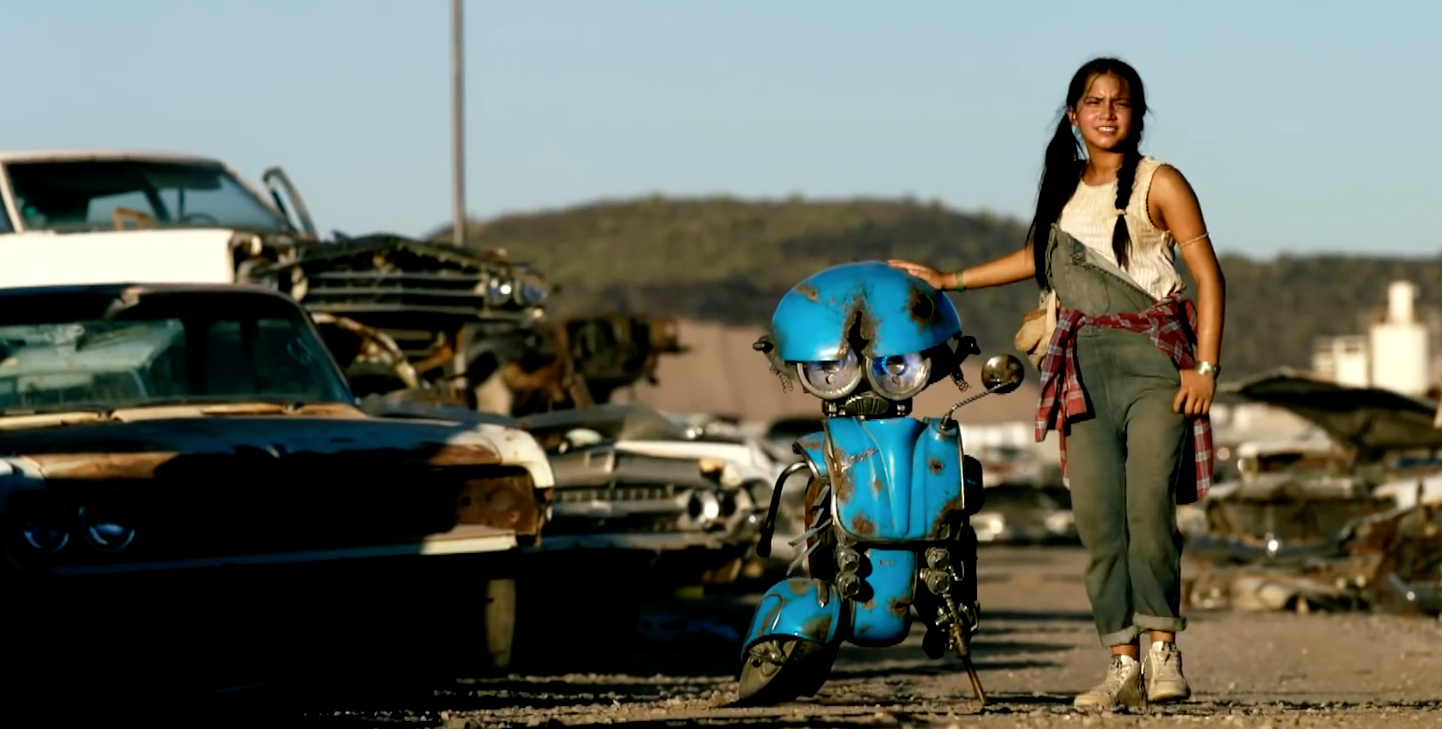 The construction Brand Caterpillar got around a minute of screen time with its logo very visible. This came in the form of its contraction machinery but mostly a Branded cap worn by Mark Wahlberg early on in the movie.

Lexus got a couple minutes of screen time around the middle of the movie as a convoy of RX 450h SUVs chase the main characters through London. It is the 2nd most visible Brand in the movie thanks to the number of its vehicles that appear and their discernibility as well as the high visibility of its logo.

Lexus is a common car Brand in movies though it is a not regular when it comes to major product placement appearances. Some of its biggest movies have been TERMINATOR 3: RISE OF THE MACHINES (2003), MINORITY REPORT (2002) or more recently FAST FIVE (2011).

And at #1 it should come as no surprise that we find the Brand that has become synonymous with TRANSFORMERS product placement, Chevrolet. This marks the 4th time out of 5 TRANSFOMERS movies that Chevrolet is the top product placement Brand. 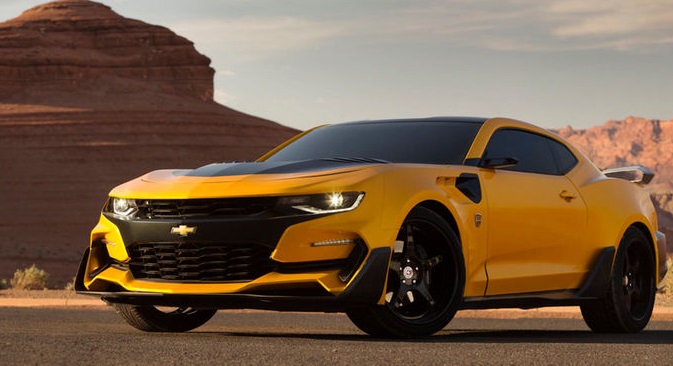 Chevrolet appeared not only in the form Bumblebee as a 2016 Camaro but also as a Corvette C7, various military SUVs and some older models in the junk yards scenes.

Chevrolet is also one of the biggest product placement Brands in the world. It came in at #5 in Concave Brand Tracking’s yearly Top 100 movie Brands ranking overall and was the 2nd highest ranked car Brand, right behind Ford.