Concave Brand Tracking has combed through all 3 seasons of HOUSE OF CARDS, recording all recognizable Branded products that appeared in them. The resulting sample that our analysis looks at is made up of 39 episodes over 3 years. You can see the full report here.

We recently published an article discussing the fact that Apple continues to be the most visible Brand in HOUSE OF CARDS just as it was throughout seasons 1 and 2. However, we also noted that while Apple had significantly more visibility than any other Brand in seasons 1 and 2, Samsung is a close 2nd in season 3.

Unlike Apple, which has been highly visible since the first episode of HOUSE OF CARDS, Samsung has evolved from one of many TV Brands in seasons 1 and 2 to rivalling Apple in season 3. This article takes a closer look at this evolution of Samsung’s presence throughout the 3 seasons of HOUSE OF CARDS.

Samsung was the 15th most visible Brand in season 1 of HOUSE OF CARDS. This was more than Polycom, but less than Panasonic.

While Samsung did appear in 10 of the 13 episodes, this only added up to 3 minutes and 19 seconds or an average of 20 seconds per episode. Almost all (99%) of Samsung’s screen time was through its TVs. As such, Samsung appeared merely in the background for over 66% of its screen time. Samsung’s logo was only visible in 22% of its screen time.

In season 1 of HOUSE CARDS Samsung accounted for 54% of TVs in terms of screen time. LG followed with 27%. Panasonic, Toshiba and Sony TVs also appeared, but all for 10% or less of total TV screen time.

In season 2, Samsung moved up from the 15th most visible Brand to the 7th. It was more visible than Blackberry but less so than LG, its main TV rival.

Another element that contributed to Samsung’s enhanced visibility in season 2 was its discernibility. While the Brand was still mostly seen in the background, its % of close-up screen time rose from 6% in season 1 to 23% in season 2. Furthermore, Samsung’s logo was visible in 31% of its screen time in season 2, up from 22% in season 1.

Samsung had the 2nd most visibility in season 3. It had only 11% less than Apple and almost twice as much visibility as any other Brand.

We saw that from seasons 1 to 2 Samsung’s screen time almost doubled. From seasons 2 to 3 it almost tripled to over 15 minutes.

After competing with LG over TV screen time in seasons 1 and 2, Samsung took over this product segment in season 3. In 91% of TVs’ screen time, they were Samsung products. LG TVs only accounted for 5%. However, dominance of TVs is only half of Samsung’s story in season 3, 56% to be specific.

So overall, Samsung had many more different products in season 3 of HOUSE OF CARDS. It appeared for far more screen time than before and, despite its logo not being seen as much, Samsung products were shown more prominently than in previous seasons.

In 3 seasons of HOUSE OF CARDS, Samsung has risen from a crowded group of TV Brands to the 2nd most visible Brand in the show, behind Apple. However, this present proximity to Apple is not only due to Samsung’s increased visibility, but also the fall in Apple’s. 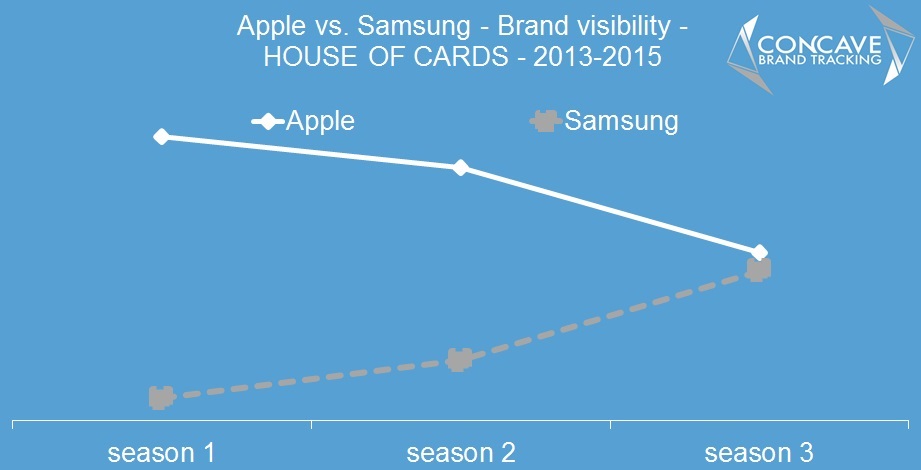 As the chart above shows, while Samsung’s visibility has gradually grown, Apple’s has decreased. This might imply correlation but that is not the case. While Samsung’s emergence is due to dominating TVs and a more diverse product range, Apple’s decrease is due to a general diversification of laptop Brands and the overtaking of iPhones by Nokia Windows phones.

To finish off, here is side-by side comparison of Samsung and Apple’s visibility metrics in seasons 3 of HOUSE OF CARDS. Apple tends to edge out Samsung on most, but given the series’ trend, if Samsung continues their roll out and Apple does not react, HOUSE OF CARDS season 4 could see Samsung take over the top Brand spot from Apple, for the first time in the show’s history. 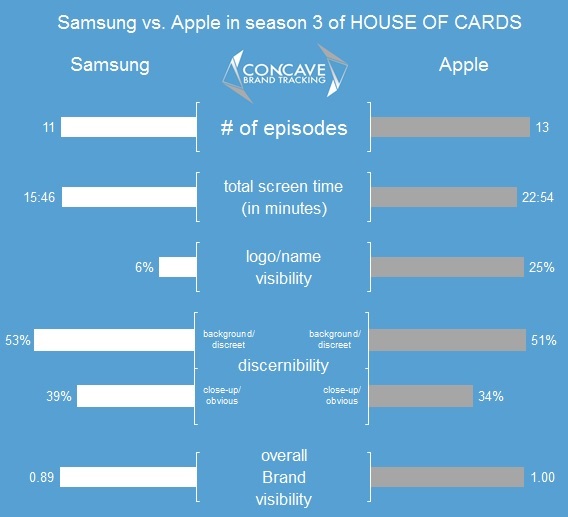