top 10 movies with the most product placement of 2020

Concave Brand Tracking combed through the 50 most-watched movies of 2020 (both in theatres and at home), recording every single brand that appeared or was mentioned.

Using an in-house model that factors how often the brands appeared, how visibly, the number of viewers, and the cost of traditional advertising Concave can value the product placement generated by each film.

Of the top 50 movies, 44 featured at least one brand. Collectively these 44 films generated almost 900 million dollars in advertising value for these brands (as of February 2021). While some of these movies only generated a few hundred thousand dollars in product placement value, others were worth tens of millions.

For more information on Concave Brand Tracking viewership and valuations models please get in touch.

Firstly, here are the only six movies that did not feature a single brand:

Now, let’s look at the 10 movies that produced the most value for the brands they featured and how they did it:

The first of five Netflix movies on this list, PROJECT POWER featured 93 different brands, the second most of any film on this list. These brands combined for 55 minutes of screen time and had an average quality of exposure of 23%.

Using Concave’s viewership model, we estimate that 55 million viewers worldwide had seen PROJECT POWER as of February 2021. This translates to just under 32 million dollars in total product placement value generated by this film.

Many of the main actors in PROJECT POWER used an array of brands:

Other notable brands that appeared in PROJECT POWER included Ford, Apple, Mercedes-Benz,­Champion and LG. All of these brands made Concave’s top 100 brand in film list for 2020.

SONIC THE HEDGEHOG was one of the few 2020 films that managed to have some semblance of a normal theatrical run before the world locked down due to COVID-19. 34 million people saw the movie in cinemas worldwide, followed by a further 57 million across all post-theatrical platforms. This combined viewership made it the 6th most viewed movie of 2020.

SONIC THE HEDGEHOG also featured 86 brands, of which 15 were mentioned in the dialogue. These name-dropped brands included Oliver Garden, Star Wars, Amazon, Vin Diesel and Costco.

Freightliner, Chevrolet,  Volvo and Converse also appeared in SONIC THE HEDGEHOG and were among Concave’s top 100 brands in 2020 movies list.

THE OLD GUARD featured only 28 brands that combined for 27 minutes of screen time. This was the smallest number of brands and the least screen time of these 10 movies. However, according to Concave’s viewership model, THE OLD GUARD was Netflix’s most-watched movie of 2020 and the second most-watched movie overall. As such, it provided over 33 million dollars in exposure for the brands that it did feature.

THE OLD GUARD also featured Audi, Apple, Oliver Peoples, AOC, BMW, Ray-Ban and Microsoft. These brands were all among the top 100 for the year.

With THE WRONG MISSY having a global audience of 83 million, the film was worth a combined 33 million dollars for all the brands that appeared in it. These varied from regular placement brands such as Apple, Dell, HP and Ray-Ban to more niche brands like Quicksilver, XCEL, Tumi and Honolulu Beerworks.

The Netflix x Chris Hemsworth action flick was the fourth most-watched movie of 2020 and showcased 45 different brands ranging from Frooti and Oxycontin to Jaguar and Dell.

CHECK OUT our full article and video on product placement in EXTRACTION.

TENET had the unenviable role of testing the worldwide box office during the pandemic. While it did disappoint by normal standards, it was still the fifth biggest movie in cinemas worldwide for the year. Over 38 million people bought tickets to see TENET, and a further 44 million viewers saw it during its post-theatrical run. All in all, this resulted in TENET being the 11th most-watched movie of 2020 overall.

Between this large audience and it featuring nearly 60 different brands, TENET was worth a combined 53 million dollars in product placement value. It featured many product placement juggernauts such as BMW, Mercedes-Benz, Audi, Hamilton, Land Rover, Samsung, Dell and Jaguar.

It also featured less common brands such as Forward WIP (harnesses and helmets in the sailing scene), SailGP (sailing boats), Boeing (plane), Saab (car) and Iveco (truck). All of these brands appeared in Concave’s top 100 list thanks mainly to featuring in TENET.

Thanks to a hybrid release both in theatres and on HBO Max, WONDER WOMAN 1984 has been seen by over 120 million viewers worldwide, making it the fifth most-watched film of 2020.

Despite being a period movie, the WONDER WOMAN sequel was filled with brands both on-screen and in the dialogue (Porsche, Smithsonian, The Wall Street Journal, Pop-Tarts and Sears). These combined for almost 60 million dollars in advertising value.

Guy Ritchie’s latest gangster film was another that slipped into theatres right before the Coronavirus shut down the cinema business. It was seen with over 12 million people on the silver screen, followed by nearly 46 million on all post-theatrical platforms. This total of 58 million viewers is the second-lowest on this list. Still, we find it at #3 because it featured almost 70 different brands, which earned over 1 ¾ hours of screen time. This is more brand screen time than any other 2020 movie.

Much of this screen time is due to Persol, Ray-Ban and Lonsdale. The two Luxottica eyewear brands were worn by Charlie Hunnam and Hugh Grant, respectively, throughout the movie for 33 minutes between them. Ray-Ban and Persol’s placement in THE GENTLEMEN were the sixth and seventh most valuable product placement on 2020, respectively.

Colin Farrell wore Lonsdale tracksuits along with his fighters in most of THE GENTLEMEN. As such, the brand enjoyed over 16 minutes of screen time. Between this extensive screen time, the film’s substantial audience and a high quality of exposure, Lonsdale’s placement in THE GENTLEMEN was the #1 most successful single-movie integration of 2020. It was worth nearly 16.5 million dollars as of February 2021. Thanks solely to this integration, Lonsdale was also the 8th most visible brand in 2020 movies.

Three placements in SPENSER CONFIDENTIAL were among the top 10 best placements of the year:

Other brands that appeared prominently in SPENSER CONFIDENTIAL included Dell, Apple, Nissan, Peterbilt, Cadillac, Pro Boxing Supplies, Cotopaxi and Skullcandy.  All of these brands can be found on Concave’s top 100 brand list for 2020.

Between being the highest-grossing English speaking movie at the 2020 global box office and having one of the most successful post-theatrical runs of the year, BAD BOYS FOR LIFE was the most-watched film that was released in 2020. It has had a total worldwide audience of nearly 140 million viewers. Beyond its huge audience, the latest BAD BOYS movie also featured over 80 different brands that totaled over an hour of screen time. They collectively received over 90 million dollars in product placement advertising value.

Porsche and Dell were the biggest winners in BAD BOYS FOR LIFE. Their appearances were the tenth and seventh-best single-movie placements of 2020, respectively. Porsche’s integration was worth 7.5 million dollars and helped make it the 19th most visible brand of 2020. Dell’s placement in BAD BOYS FOR LIFE was worth nearly nine million. This was one of its 19 placements in the top 50 movies of 2020 and was a significant contributor in making Dell the third most visible brand in film for the year. 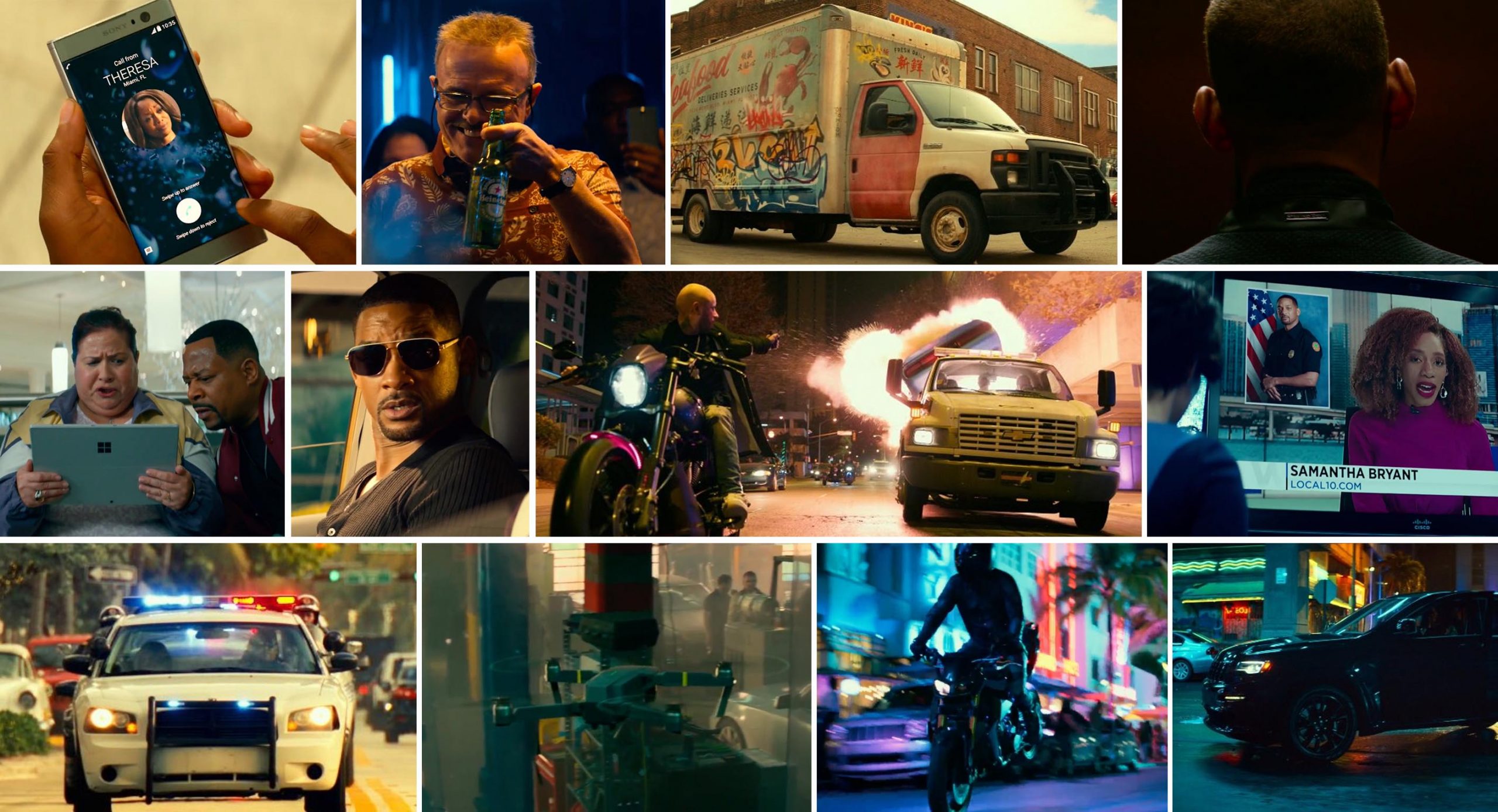 Check out the top 10 most brand-filled movies from 2019 here.