Over 1,700 different brands appeared in the top 100 movies at the 2019 US box office. They collectively generated 564 million dollars in product placement advertising value between them. However, no brand got a bigger share of this than Ford.

With appearances in 80% of all movies that featured at least one brand, including the highest-grossing of all time and a film about the brand’s historic participation in the 1966 Le Mans race, Ford was, by far, the most visible brand in 2019 movies.

Ford has been no stranger to successful product placement in recent years. It has never ranked lower than #13 and only been outside of the top 10 brands once since Concave Brand Tracking started publishing its top 100 list in 2014. Most recently, Ford was #5 in 2017 and #3 in 2018. 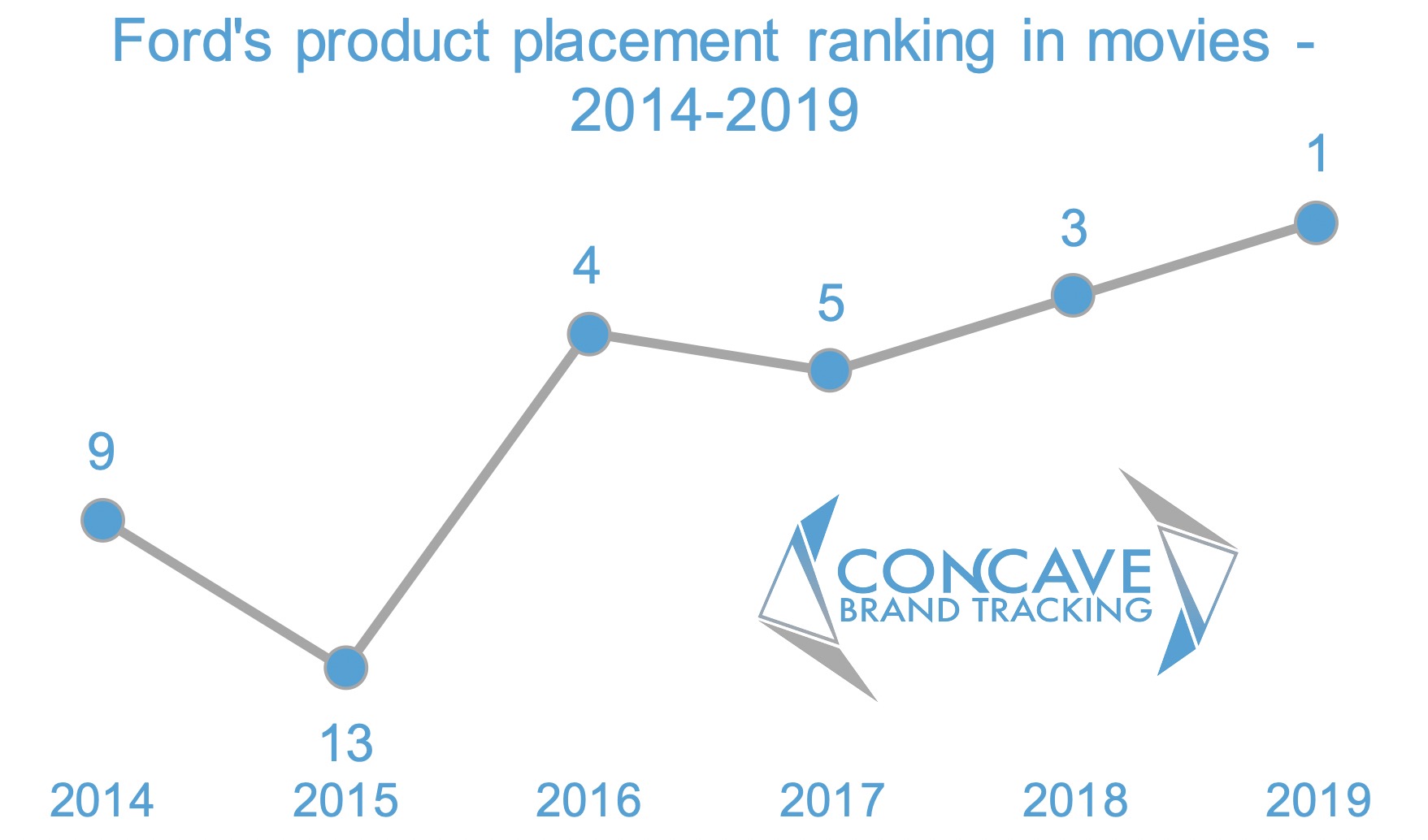 Ford appeared in 73 of the top 100 movies at the US box office, significantly more than any other brand. However, it’s seven most visible appearance accounted for almost 70% of its total value. Furthermore, it’s top two integrations both ranked in the top 10 single-film product placements of 2019. These were in AVENGERS: ENDGAME (worth $4.7M) and FORD V FERRARI ($12.7M).

This iceberg-type distribution whereby a small fraction of a brand’s movie’s make up a majority of its visibility is widespread in product placement. In fact, of the top 100 brands in 2019 films that appeared in at least 10 movies (39 brands), we find that, on average, 10% of their movies made up 67% of their total product placement advertising value. This put Ford just above the average. Brands that had the most concentrated value in its top movies included Audi and HP, while examples of brands with more spread out presences included Microsoft and Converse. 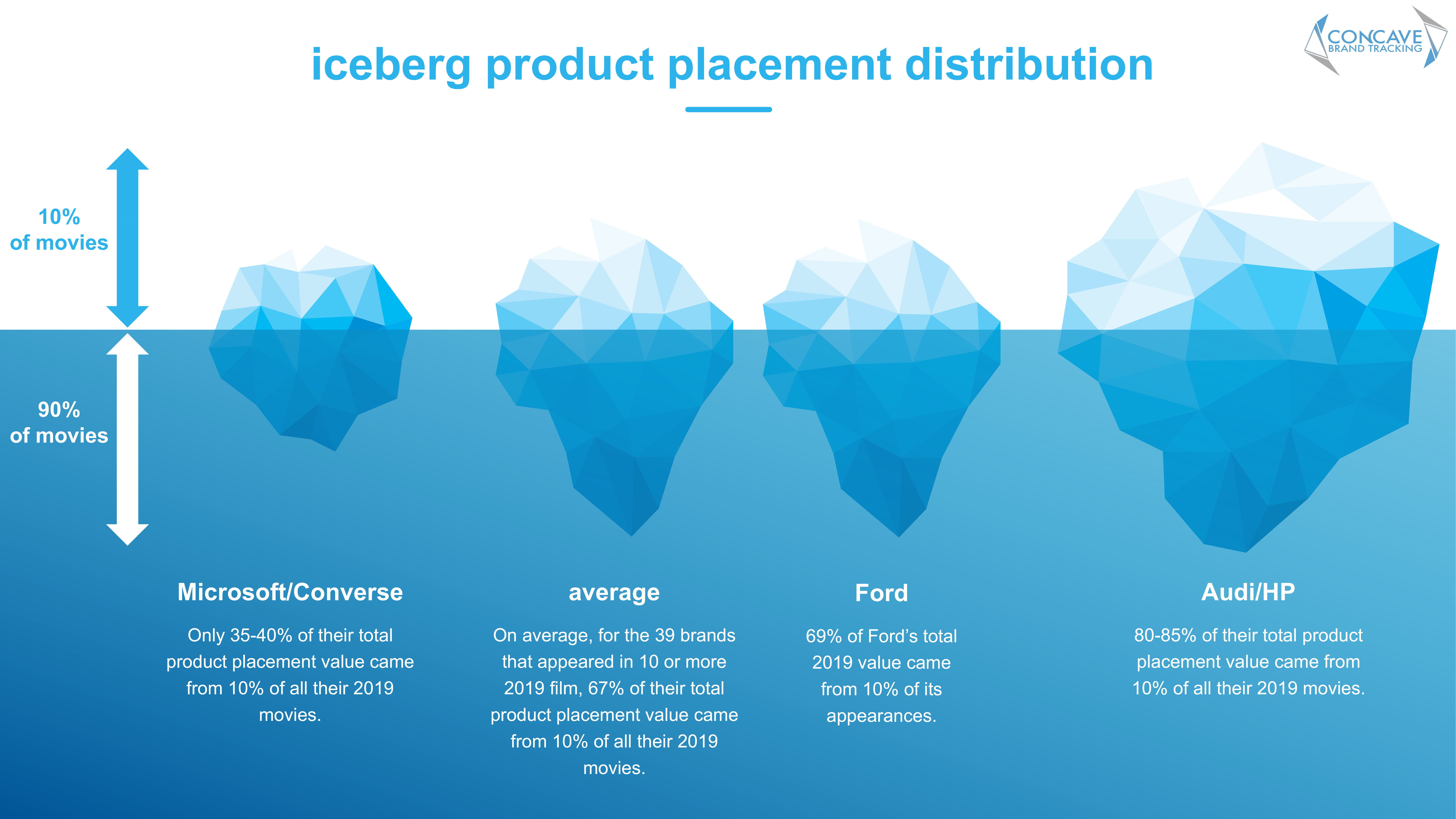 Ford was associated with 80 different characters across all its 2019 movie appearances.

The youngest actor associated with Ford was Marcel Ruiz (16) in BREAKTHROUGH and the oldest was Sylvester Stallone (73) in RAMBO: LAST BLOOD. The overall average age for individuals associated with Ford in 2019 movies was 43. This was above the general brand average of 39, but lower than such brands as McLaren (51) or Vizio (61). Examples of brands with low average ages included Converse (23) and Nike (27). 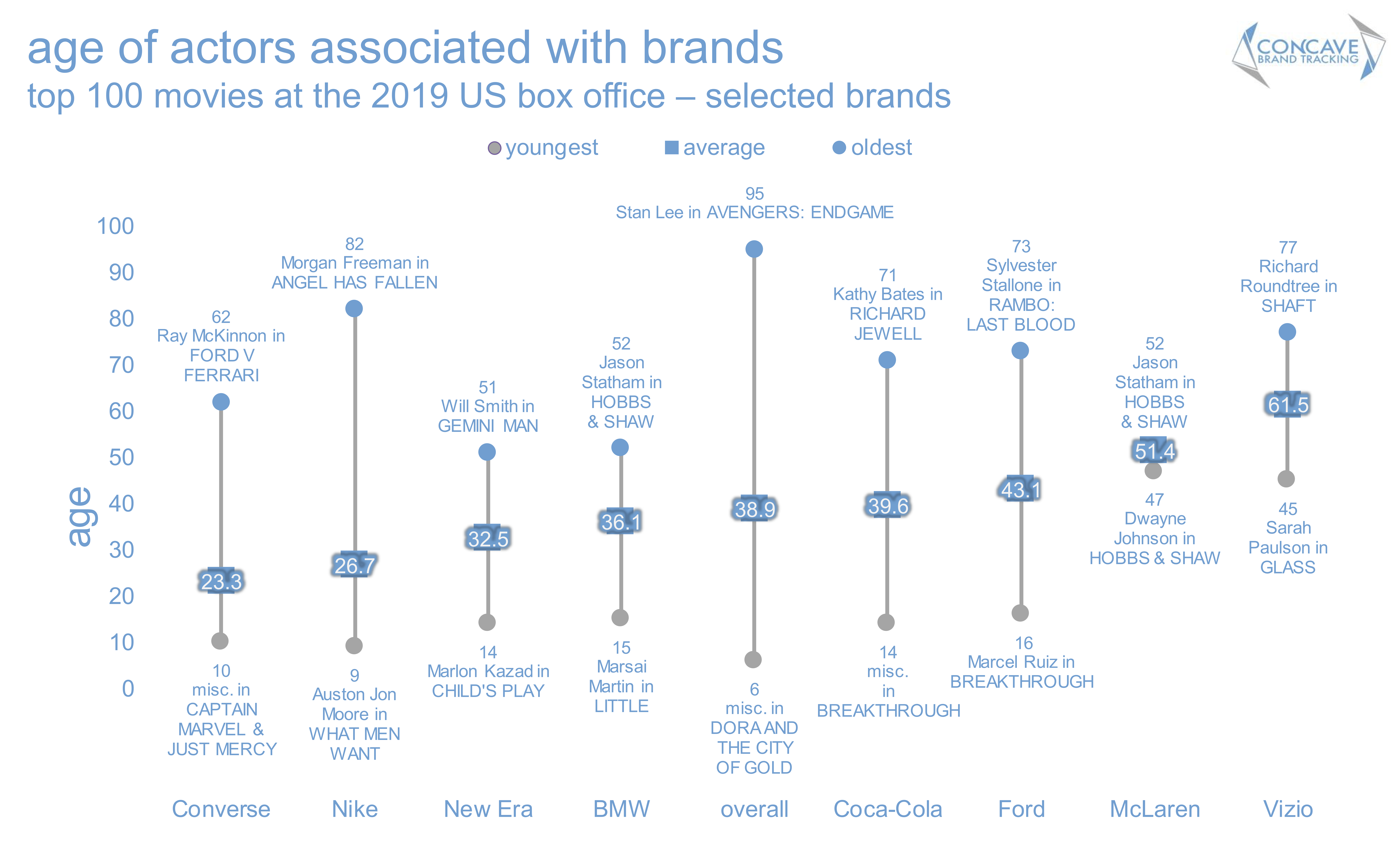 While brands were overall far more used by men than women in 2019 movies (77% vs. 23%), Ford’s gender disparity was even higher than that. It was associated with male actors in 84% of its screen time in 2019 movies. Some brands like Rolls-Royce or Cutler & Gross were even more often associated with men. Apple was one of the brands closest to a 50/50 split. 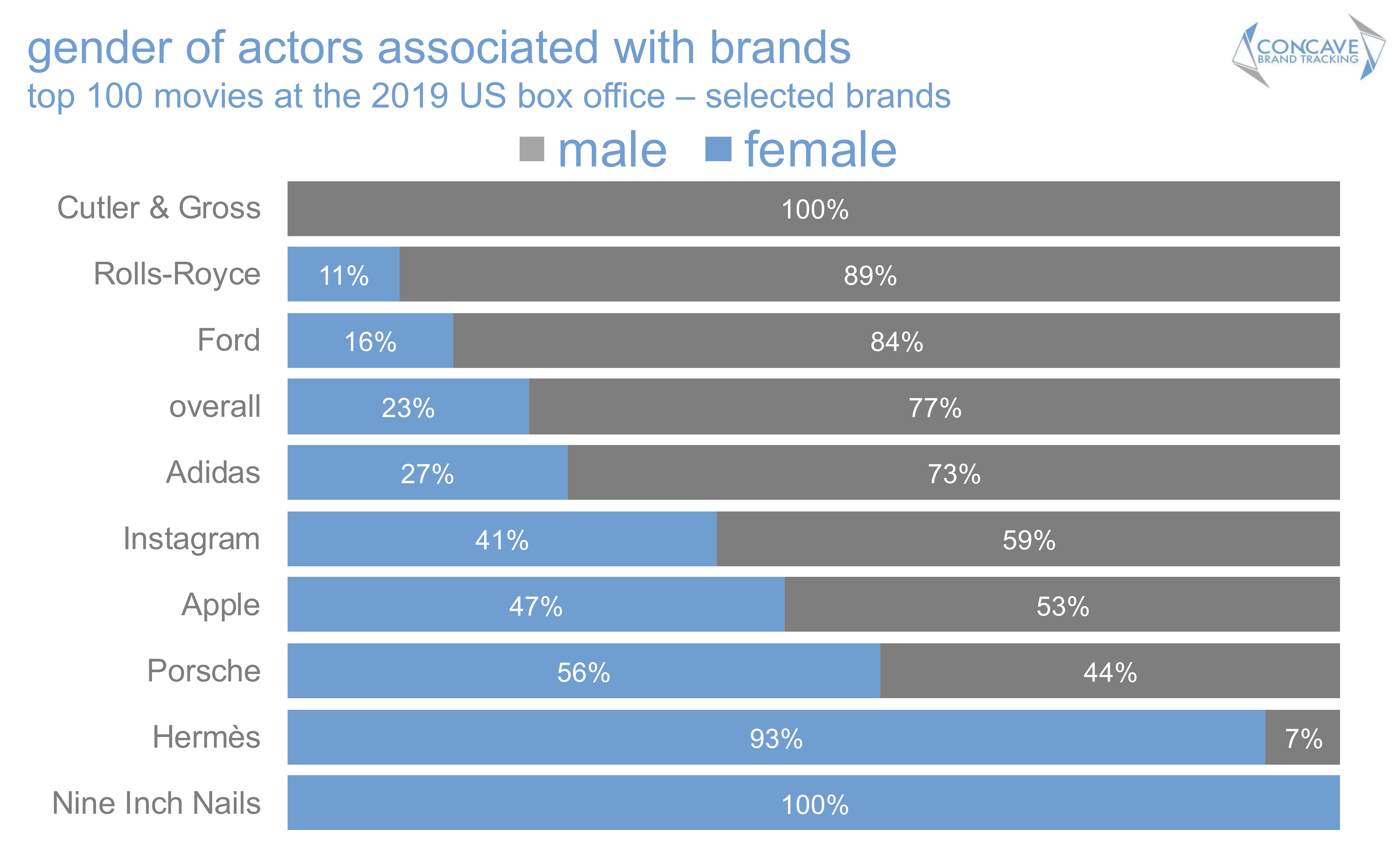 Brands that were more often associated with women than men were Porsche, Hermès and Nine Inch Nails (worn only by Brie Larson in Captain Marvel).

One of the many reasons for Ford’s dominance of entertainment marketing is the breadth in the use of its vehicles. The brand appeared in the form of ambulances (3% of screen time), taxis (4%) and police cars (24%). More broadly, Ford vehicles were portrayed as being professional in 53% of its screen time. Other associations included cross country driving (2%), crime (8%), speed (17%) as well being shown in historical or “old school” contexts in 35% of its screen time.

One ramification of appearing in a lot of period movies like ONCE UPON A TIME IN HOLLYWOOD or FORD V FERRARI can be that the products being showcased are quite old. Ford is a good example of this, as the average year of its models across all its 2019 movies was 1990. While this is not as old as Daimler, Rolls-Royce or Oldsmobile, brands such as Mercedes-Benz, Ferrari, Tesla and Maserati showcased newer models of their cars.