This week marks the 20-year anniversary of the release of FIGHT CLUB (1999). In honour of this occasion, Concave Brand Tracking recorded every recognisable brand that featured in David Fincher’s cult classic and valued how much advertising value these product placements have generated in the past two decades.

One of the greatest and untapped values of product placement is people seeing a brand in a movie long after it has come and gone from the silver screen. We all go to the cinema, but something we do far more often is tune in to a movie on TV, re-watch an old DVD or check something out on Netflix. Each time this happens, that set of eyes seeing an actor use a Dell laptop, wearing an Omega watch or drinking a Budweiser is just as valuable to these brands as when a movie first comes out.

https://www.youtube.com/watch?v=4sFMpyzkWA4
While FIGHT CLUB might mock consumerism, this did not stop it from featuring over 75 real-life brands and generating over 144 million dollars in advertising value for them in its lifetime. This, in contrast with it only generating eight million during its theatrical release.

Concave Brand Tracking has developed an in-house model to estimate the lifetime viewership of a movie using theatrical box office performance data and audience engagement on review sites such as Rotten Tomatoes and IMDB. While it is much more accurate going forward with movies coming out presently, this model does allow us to come up with a range of audience sizes for older movies. In the case of FIGHT CLUB, our most conservative assessment is that it has been viewed well over 340 million times across the world in the past 20 years.

Beyond analysing brands’ exposure, we also took an interest in their role in the movie. Some brands were clearly meant to be mocked, such as the stores they attack later in the movie. Others had undeniable positive depictions, like the beers consumed by the main characters or the sunglasses worn by Brad Pitt. However, the majority of the brands – the cars in the streets or telephones at the office – had neutral portrayals. All in all, we found that 60% of brand visibility was neutral, 20% was negative and 20% was positive. As we go through the top 10 brands, we will discuss how each of them was portrayed.

Apple appeared in two scenes. Firstly, a laptop is shown in a conference room and then later on an electronics shop displaying Apple computers is blown up during “project mayhem”. The first scene is neither negative nor positive. It merely shows Apple as a professional brand to be used in any regular business.

The store scene, however, is clearly a negative portrayal. Not only do we see Apple products being destroyed, but the reason they are committing this act of terrorism is to fight back against the evils of capitalism and consumerism. Apple is used as a symbol of this.

Apple’s history of appearing in movies goes back to its starring role in the first MISSION: IMPOSSIBLE in 1996. Since then it has been one of the most visible brands in entertainment, topping Concave Brand Tracking’s 2018 list of the top 100 brands in movies.

Sony is a good example of a brand that appeared in a neutral context. In a classic brand integration, its monitors were used in one of the final scenes to show the action through CCTV.

Sony only had 20 seconds of screen time. However, as most of this was in close-ups and the Sony logo was clearly visible, it earned the brand over $200,00 worth of exposure when FIGHT CLUB came out in theatres and nearly four million dollars since.

Sony is also currently one of the biggest product placement brands in movies. It has been the 4th, 6th and 12th most visible brand in movies in 2018, 2017 and 2016 respectively.

BMW is another brand that is used to represent the supposed evil that Tyler Durden & co fight against. While no cars were blown up, a BMW Z3 Coupé does get covered in pigeon poop as part of “project mayhem” while a BMW 7 has its alarm triggered as Brad Pitt and Ed Norton’s characters hit it with baseball bats.

It is interesting that in both the case of Apple and BMW, no effort is made for them to seem like generic brands or even just hide their logos. Fincher clearly wanted people to recognise the brands as they have such significance for people.

BMW was the 6th most visible brand in 2018 movies. It appeared in 37 films including THE EQUALIZER 2, BUMBLEBEE, A SIMPLE FAVOR and MISSION: IMPOSSIBLE – FALLOUT.

In FIGHT CLUB, when Brad Pitt and Edward Norton are not fighting, they are usually drinking beer. While Bud Light, Michelob Dry and Red Wolf also appear in the movie, they did not make the top 10, unlike Busch. The Anheuser-Busch brand appears visibly in a couple of scenes and is portrayed positively as a relaxing social drink to have with the boys. The most visible beer brand in FIGHT CLUB though is #5 on this list.

Busch had 43 seconds of screen time but its logo was visible in every scene it appeared in. This translated to ¼ of a million dollars in advertising value during the film’s theatrical run and a further 4.25 million since.

Much like Sony, Cadillac virtually only appears in one scene. But as one of Tyler’s gang members tries to pick a fight with someone in a car dealership, it is impossible to not notice the Cadillac cars parked around them or the huge Cadillac sign which takes up a significant part of the screen.

Given the fighting going on in the scene and the depiction of other luxury car brands in the film, the portrayal could have been much worse for the GM brand. Concave rated this depiction as neutral.

As such, Cadillac got $300,000 worth of exposure when FIGHT CLUB came out, and over five million dollars since.

Cadillac remains one of the most prominent car brands in movies to date. It has consistently ranked in Concave Brand Tracking’s annual top 100 list in 2018, 2017 and 2016. In 2018 it was the 13th most visible brand, appearing in 29 movies, including GREEN BOOK, ANT-MAN AND THE WASP and THE PREDATOR.

While Busch appeared in a couple of scenes, it was Budweiser which was the most visible beer brand in FIGHT CLUB. Between its neon signs adorning most of the bar scenes, Edward Norton and Brad Pitt sipping on their bottles after beating the shit out of each other or other characters drinking the King of Beers in the background of the fight scenes, Budweiser is omnipresent throughout the movie.

Not only does the brand get nearly three minutes of screen time (the second most of any brand), but the red and white bottles are an iconic part of the look and feel of the movie and are a symbol or the rebellious lifestyle offered by Tyler Durden. While some might take issue with the association with violence and smoking, for fans of this movie, Budweiser is unquestionably portrayed as being cool and hence, it is a positive portrayal. As for value, the placement by Budweiser earned them almost $450,000 in marketing exposure during FIGHT CLUB’s theatrical run as well as seven million dollars in the 20 years since.

Despite being the fourth most visible brand in FIGHT CLUB, Lincoln was also its biggest victim. Many have wondered what car manufacturer Edward Norton’s character worked for. And while the name FMC is used as a cover to not make it too obvious, the two wrecked cars he inspects are Lincoln Town Cars according to IMCDB. And, in case you have any doubts about the desire of this movie to portray Lincoln negatively, the car Tyler Durden crashes is a Lincoln, as is…the car they crash into. Finally, the limousine that gets its tyres punctured after they reverse the one-way spikes in the parking lot is, you guessed it: a Lincoln. This means that all five Lincoln vehicles that appear in FIGHT CLUB are involved in some sort of an accident.

The most visible car brand in FIGHT CLUB was Ford. Eight different Ford vehicles appeared, ranging from Crown Victoria police cruisers and taxis to the Econoline truck that contains the bombs at the beginning/end. While the association with crime can be viewed as negative, it is a part of the story and not a judgment on the brand as with Apple, BMW and Lincoln. Hence, we rated the portrayal as neutral.

Ford had two and a half minutes of screen time. This led to over half a million dollars of product placement advertising value when the movie first came out and nearly 9.5 million more since.

Unlike most of the brands on this list, this once it is not only uncommon but in fact, no longer exists.

Lucent was a short-lived company that made office telephones between 1996 and 2006. It came into existence through the divestiture of the former AT&T Technologies business unit of AT&T Corporation. It then merged with the French company Alcatel to form Alcatel-Lucent in 2006. This company was subsequently absorbed into Nokia in 2016, forever burying the standalone Lucent brand name.

At the time, this generated over $600,000 in advertising value. Since then, Lucent has received an additional 10 million dollars’ worth of exposure, despite it not being around anymore.

You might have not have noticed the phones in FIGHT CLUB before, but you will now!

And the big winner of FIGHT CLUB is (drum roll) OLIVER PEOPLES.

It should come as no surprise that the manufacturer of the iconic red sunglasses worn by Tyler Durden would be the most visible brand. Indeed, it received four and ¾ minutes of screen time which was far more than any brand. Oliver Peoples also appeared consistently throughout the movie in the form of three different models: the OP 523, the Aero and the Sunset.

While the Oliver Peoples logo is never visible – and this is factored into its valuation – thanks to the internet, anyone who types in “Tyler Durden sunglasses” or “Brad Pitt sunglasses in FIGHT CLUB” will find out they are Oliver Peoples in a matter of seconds. This ability to identify a brand from a movie online is very important as over 70% of brands in movies do not feature a name or logo.

As for the portrayal, these sunglasses will forever be associated with Brad Pitt’s iconic performance as Tyler Durden. While the exact models are out of production, they are now coveted collectors’ items on websites like eBay. This makes the portrayal uniquely positive.

As the most visible brand in FIGHT CLUB, Oliver People got almost $900,000 in product placement advertising value in 1999 and just under 16 million dollars to date.

Though not an omnipresent eyewear brand in entertainment, Oliver People has been far from a one-hit-wonder. Since FIGHT CLUB, they have been worn in movies by Harrison Ford in THE AGE OF ADALINE (2015), Mark Wahlberg in THE GAMBLER (2014), Bradley Cooper in THE HANGOVER PART II (2011), Robert Downey Jr. in DUE DATE (2010) and even Brad Pitt again in MR. & MRS. SMITH (2005).

And finally, Gucci is initially mocked for its portrayal of male models in great shape early in the movie. However, a keen-eyed viewer will notice that at the end, as he’s about to fight Edward Norton, Brad Pitt jumps out of the Ford Econoline and a shot very deliberately shows him wearing Gucci loafers. This product placement Easter eggs might perfectly symbolise the whole love/hate of vanity contradiction that is pervasive throughout the movie…

Thanks reading! To see more images of the product placements in FIGHT CLUB and other drama movies, check out our Pinterest board. 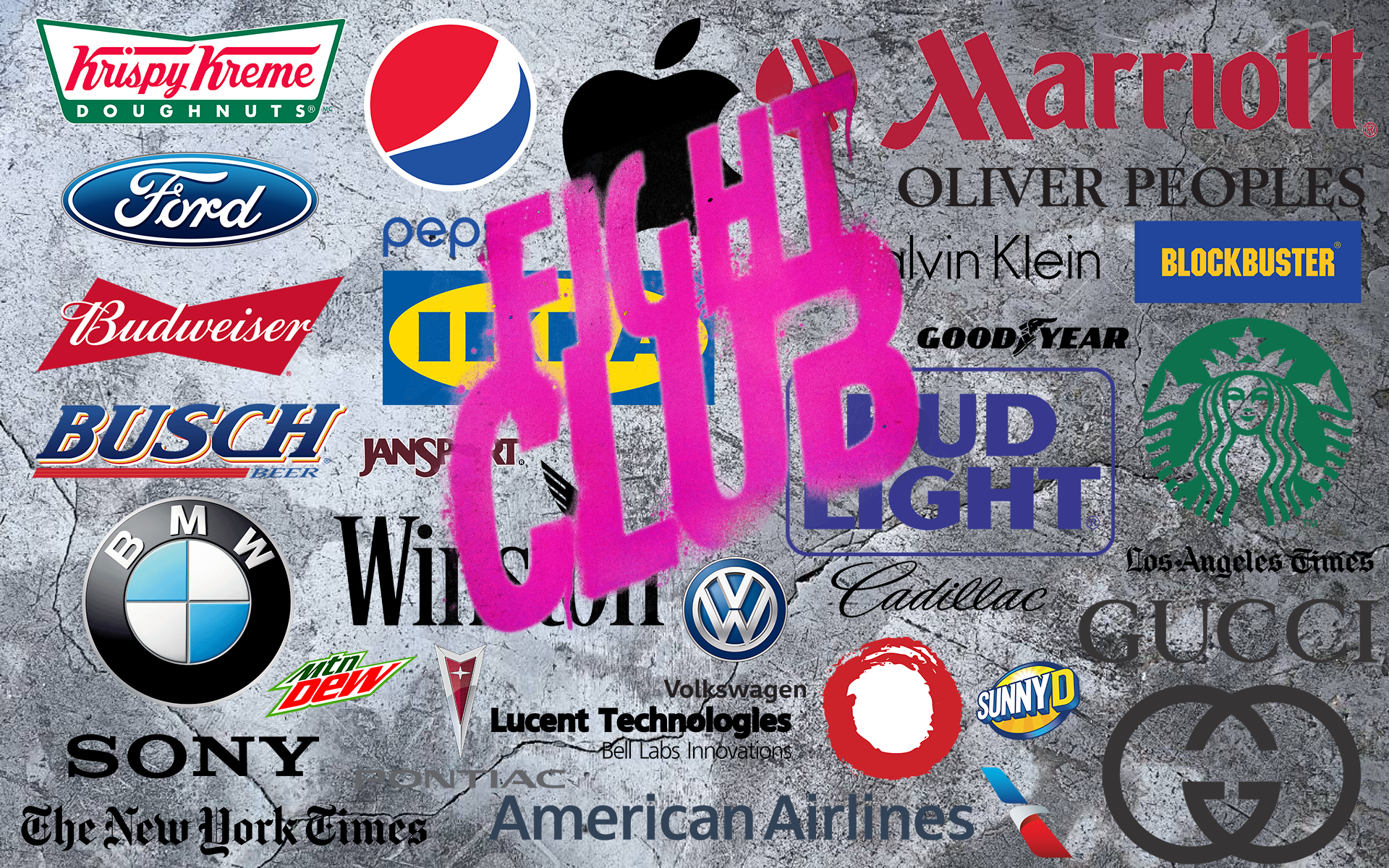