Concave Brand Tracking combed through the top 100 movies at the US box office, recording every recognizable brand that was seen or mentioned. We found over 1,700 brands across 89 films, meaning 11 did not feature a single brand, up from four in 2018. 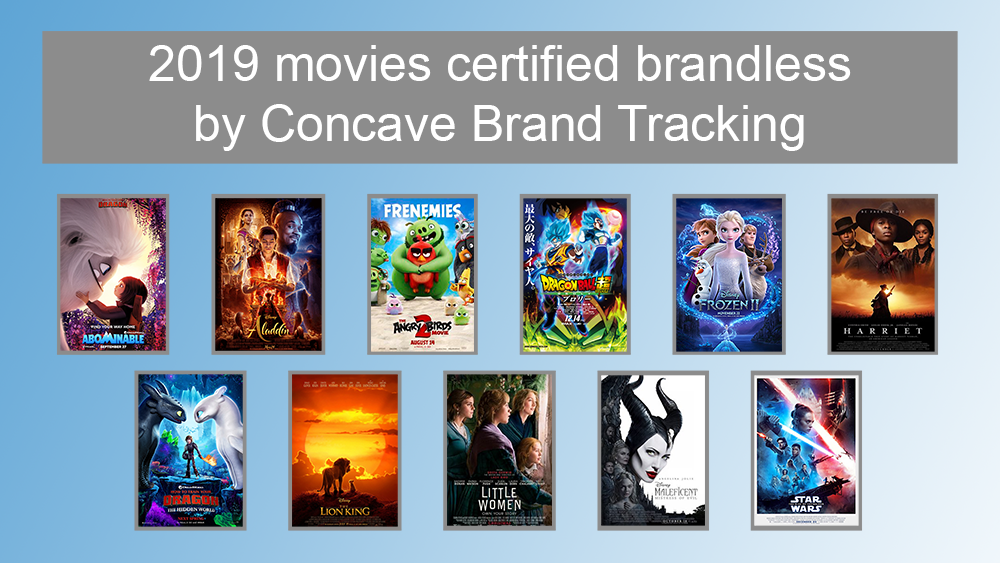 The 89 movies with at least one brand generated 564 million dollars in product placement advertising value. However, nearly 70% of that value came from the top 10 most brand-filled movies of 2019. In this article, we take a look at these 10 films and how they gave brands so much exposure.

Here is also the video version of this article:

There are broadly two ways for a movie to generate a lot of value for brands. It can feature a lot of brands and it can be commercially successful, meaning lots of people see the brands. Now, a movie can do both these things or some balanced combination, but some are clearly on this list for just one. The JOKER is a clear example in which brands got their value mostly because of the audience’s size.

JOKER only featured 20 different brands for a total of 13 minutes of screen time. To put that in context, 69 of the top 100 movies at the US box office had more brand screen time. But with over 1.1 billion dollars grossed across the world, JOKER still generated nearly 17 million dollars in exposure for the few brands it did fleetingly show.

16 of the 20 brands in the JOKER were car manufacturers (see IMCDB for more details on the models). However, the most visible brand was Panasonic. It appeared for nearly three minutes of screen time, with much of it being closeups of its TVs with its logo being visible.

Much of JUMANJI takes place in a fantasy land with very few brands other than motorcycles, ATVs and Kevin Hart’s Casio watch. But the real-world opening and end of the movie were packed with over 40 different brands ranging from toothpaste and suitcases to phones and sneakers. This resulted in about the same amount of brand visibility as in JUMANJI: WELCOME TO THE JUNGLE (2017).

JUMANJI: THE NEXT LEVEL was the tenth most theatrically viewed 2019 movie globally. As such, it provided brands with 16.9 million dollars in product placement value. The biggest beneficiaries of this were Sony and (which was also the #4 brand in 2019 movies overall) and Polaris (#50 overall).

While THE LEGO MOVIE 2 featured seven other brands, it was unsurprisingly the one if the title that got 99% of the advertising value: Lego.

Although the film did generate more advertising visibility for Lego than any other brand in a single 2019 film, its weak box office performance means that it was less successful in its purpose than THE LEGO MOVIE (2014) and THE LEGO BATMAN MOVIE (2017). Furthermore, Lego’s movies crowned it the most visible brand in film in 2017 and 2014, but we found it only at #3 in 2019.

KNIVES OUT was a surprise box office hit with $309M grossed worldwide. It also featured 41 brands for a total of an hour and 13 minutes of screen time as well as 17 in the dialogue. This was worth a combined 20.5 million dollars.

The biggest brand winner was Hyundai. The female lead of the movie (played by Ana de Armas) drove a 2007 Hyundai Accent resulting in the brand getting nearly four minutes of screen time.  Hyundai was the 54th most visible brand in 2019 movies, mostly thanks to this appearance, though it did also feature in 23 other films.

Other notable brands included Cisco Brewers (beer drunk by Chris Evans), Ford (police cars), Apple as well as Cutler and Gross and Brooks Brothers (both worn by Daniel Craig). These brands were respectively the 72nd, 1st, 2nd, 80th and 81st most visible brands in 2019 movies.

#6 ONCE UPON A TIME IN HOLLYWOOD – $31.4M in product placement value

Just because a movie takes place in a past era doesn’t mean it is light on brands. Quentin Tarantino’s ninth film featured the second most brands of any on this list. One could see 86 different brands for a total of over one and a half hours of screen time and a further five were mentioned in the dialogue.

Cars made up over 50% of all the brand exposure and Cadillac was the most visible overall. Other unmissable brands were Champion Spark Plugs (t shirt worn by Brad Pitt throughout much of the film), Citizen (Brad Pitt’s watch), Porsche (Margot Robbie’s car) or Pan American.

Check out our video analysis of all the brands in ONCE UPON A TIME IN HOLLYWOOD.

Between ONCE UPON A TIME IN HOLLYWOOD and AD ASTRA, Brad Pitt was associated with 20 brands in 2019 movies and nine million dollars in advertising value for them. This made him the ninth most valuable actor for brands that year.

Much like ONCE UPON A TIME IN HOLLYWOOD, CAPTAIN MARVEL also took place in past decades and featured many brands.

Forty-four different brands appeared on screen and seven were in the script. They only clocked 31 minutes of screen time, but with the movie grossing over a billion dollars, the brands got a combined 37 million dollars worth of product placement value.

While some of this went to classic product placement brands like Chevrolet (#5 brand overall in 2019), Sony (#4), Apple (#2) or Harley-Davidson (#92) there were also a bunch of era-specific ones. They included Nine Inch Nails, Blockbuster, Heart, Happy Days and AltaVista.

With many of these brands associated with the movie’s star, Brie Larson, she was associated with 18 million dollars in value for them, the third most of any actor. She was also the only female actor to make that top 10.

SPIDER-MAN: FAR FROM HOME is an example of a movie that both featured lots of product placement and had a vast audience.

Fifty brands combined for almost an hour of screen time and with the movie grossing over 1.1 billion dollars, over a hundred million people saw the film worldwide.

SPIDER-MAN: FAR FROM HOME featured three of the most successful product placements of 2019:

FORD V FERRARI grossed far less than most of the movies on this list but featured over 145 brands for a total of over four hours of combined screen time. This resulted in the film generating 58 million dollars in brand exposure.

Some of the visible non-car-related brands were Entourage of 7 (Matt Damon’s sunglasses), Ray-Ban, Budweiser and Coca-Cola.

Check out our full analysis of the brands in FORD V FERRARI.

HOBBS & SHAW combined almost an hour and half of screen time for 68 brands with a 759 million dollar gross at the global box office. This created 61 million dollars in product placement advertising value for brands such as Land Rover, Triumph, McLaren, Peterbilt, Apple and Maison Margiela. All of which ended up in 2019’s list of the top 100 brands in film.

Furthermore, HOBBS & SHAW made Dwayne “The Rock” Johnson and Jason Statham the actors associated with the second and fourth most brand value on any actors in 2019 films.

Check out our full video analysis of the brands in HOBBS & SHAW.

While AVENGERS: ENDGAME only featured 31 minutes of brands on screen, it still packed 39 different ones as well as 20 in the dialogue. With it being the most commercially successful movie of all time, these brands enjoyed a combined 76 million dollars in product placement advertising value.

Check out our full video analysis of the brands in AVENGERS: ENDGAME.