Concave Brand Tracking has manually combed through the top 100 movies at the US box office for 2019, recording every brand that appeared or was mentioned. We also measured how visible the product placements were, how long they were on screen for, and how much advertising value they generated, as well as an array of contextual data regarding brands’ portrayal.

We recorded over 300 different types of products from nearly 1300 brands. The following is an in-depth look at the top 10 brands, ranked by their total advertising value.

After narrowly missing out last year – despite its very visible appearance in GREEN BOOK (2018) – Cadillac returns to this top 10 list for the first time since 2014. It is, however, noteworthy that Cadillac is among an elite list of brands that have been among the top 100 brands in film since Concave started this list in 2014.

In 2019, Cadillac featured in 32 movies, including IT CHAPTER TWO, LITTLE and ZOMBIELAND 2: DOUBLE TAP. Its most valuable appearance in terms of exposure though was in ONCE UPON A TIME HOLLYWOOD. Brad Pitt drove a 1966 Coupe DeVille for much of the movie, and a couple of other models can be seen at various points. Overall, Cadillac got over eight and a half minutes of screen time in the latest Quentin Tarantino movie. This was worth millions of dollars for the GM brand and accounted for 49% of its total 2019 exposure in film.

Dell furthered its product placement hot streak with its fourth year in a row as one of the top 10 most visible brands in film. It was, notably, #1 in 2016.

Dell appeared in 32 movies, including HOBBS & SHAW, LONG SHOT, GODZILLA: KING OF MONSTERS, MEN IN BLACK INTERNATIONAL and AVENGERS: ENDGAME. It featured in the form of monitors, laptops, computers, tablets, servers, mouses and keyboards. Dell got the most product placement value from computer-related products ahead of competitors such as Apple, HP and Lenovo. It also remained one of the brands most often associated with professional use, whether in offices, hospitals or government buildings.

Dita appeared in just two movies in 2019. However, they grossed nearly four billion dollars at the global box office between them. The eyewear brand had less than a minute in AVENGERS: ENDGAME but got significantly more screen time in SPIDER-MAN FAR FROM HOME and, hence, more advertising value.

Dita’s placement in SPIDER-MAN FAR FROM HOME was worth 8.3 million dollars and was the fourth most successful product placement of 2019.

Dita was also the 56th most visible brand in 2018 movies.

2019 saw Audi continue its long-lasting partnership with the Marvel Cinematic Universe with highly visible appearances in AVENGERS: ENDGAME. With a minute and a half of high-quality exposure, that appearance was worth 5.9 million dollars and was the 8th most successful product placement of 2019.

Audi also featured extensively in SPIDER-MAN: HOMECOMING and the animated movie SPIES IN DISGUISE. These official collaborations between the brand and studios accounted for most of Audi’s 2019 exposure in film and its position in this top 10 list. The German brand did also appear in 17 other 2019 movies, most of which were likely organic integrations.

Concave Brand Tracking spoke to Kai Mensing, the head of international product placement at Audi, about the brand’s success in film: “Product placement in Hollywood blockbusters gives us an ideal opportunity to stage Audi´s products in a spectacular environment and to customize our technologies for a highly engaged audience. Our models become an authentic part of the plot. Therefore product placement plays a significant role in our new brand strategy.”

In contrast with many brands on this list  – which appear in dozens a movie every year  – at number six, we find a brand that only appeared in a single 2019 film: Nine Inch Nails. The band’s t shirt was worn for over 10 minutes of screen time by the titular character of CAPTAIN MARVEL (played by Brie Larson). Between this extensive screen time, the high logo visibility and the movie grossing 1.13 billion dollars at the global box office, the Nine Inch Nails brand received millions of dollars in advertising value. It was, in fact, the second most valuable brand integration of 2019 film.

While Nine Inch Nails has not appeared in any other major movies in recent years, it is far from the only band to feature in this way. A Black Sabbath t shirt was worn by Tony Stark (played by Robert Downey Jr.) both in 2019’s AVENGERS: ENDGAME and 2012’s THE AVENGERS. Dwayne “The Rock” Johnson wore a Mötley Crüe tank top in HOBBS & SHAW (2019) and Hailee Steinfeld wore Motörhead, The Damned and The Smiths shirts in 2018’s BUMBLEBEE.

The brand appeared in the same number of 2019 movies as in 2018: 54. These included such blockbusters as CAPTAIN MARVEL, JOKER, HOBBS & SHAW, as well as smaller movies like SHAFT, QUEEN & SLIM and BLACK AND BLUE.

Sony’s success in product placement is due to its partnerships with highly successful movies at the box office and the versatility of its product range.

The Japanese brand has the unique advantage of being closely related to Sony Pictures. This connection led to appearances in the studio’s biggest 2019 films: SPIDER-MAN: FAR FROM HOME (co-produced with Marvel) and JUMANJI: THE NEXT LEVEL. However, it seems Sony’s partnership with Marvel went beyond SPIDER-MAN, as it features in CAPTAIN MARVEL and AVENGERS: ENDGAME.

These four aforementioned placements made up the lion’s share of Sony’s 2019 value in movies, despite it appearing in 21 other films. These included RICHARD JEWELL, THE ART OF RACING THE RAIN, CRAWL, QUEEN & SLIM, MEN IN BLACK INTERNATIONAL, BOMBSHELL, LONG SHOT and PLAYING WITH FIRE.

Sony also had one of the most diverse presences in terms of types of products. It got the most value from its phones, but its TVs also showed up in 11 movies, its headphones, boomboxes and hi-fis in four each, respectively and cameras in two. Overall, Concave Brand Tracking recorded 14 different types of Sony products in 2019 films.

And at number three, we find a brand that is on this list thanks to having the most valuable single-movie product placement of 2019: Lego in THE LEGO MOVIE 2.

Although the film did generate more advertising visibility for Lego than any other brand in a single 2019 film, its weak box office performance means that it was less successful in its purpose than THE LEGO MOVIE (2014) and THE LEGO BATMAN MOVIE (2017). Furthermore, Lego’s movies crowned it the most visible brand in film in 2017 and 2014, but we find it only #3 in 2019.

As the below chart shows, these two predecessors were worth 58.9 million and 72 million in exposure, respectively. Only THE LEGO NINJAGO MOVIE did less for Lego. Given the diminishing returns of the movies and that Warner Brothers has given up the right to the franchise, it will be interesting to see if this is the last time we see Lego among the top ranks of the entertainment marketing world.

Along with Chevrolet, Apple is the only other brand to feature in this top 10 list every year since we began publishing it in 2014. Apple has even been in the top four every year since 2015, culminating with it being #1 in 2018.

Apple appeared in 58 of the top 100 movies at the 2019 US box office, up from 53 in 2018. Its most effective placements were in HOBBS & SHAW and FIVE FEET APART. Interestingly, these two films illustrate two of the most common types of successful brand integrations.

In HOBBS & SHAW Apple got around 3 minutes of screen time and average quality of exposure. However, with that film grossing 759 million dollars worldwide, this exposure was worth millions.

All in all, these two placements were worth a similar amount, but Apple achieved this in very different ways.

Finally, Apple’s presence came in the form of many products ranging from MP3 players to laptops, but it got the most value from mobile phones. It was even the market leader in this category, with Apple getting 43% of all value generated by that type of product. 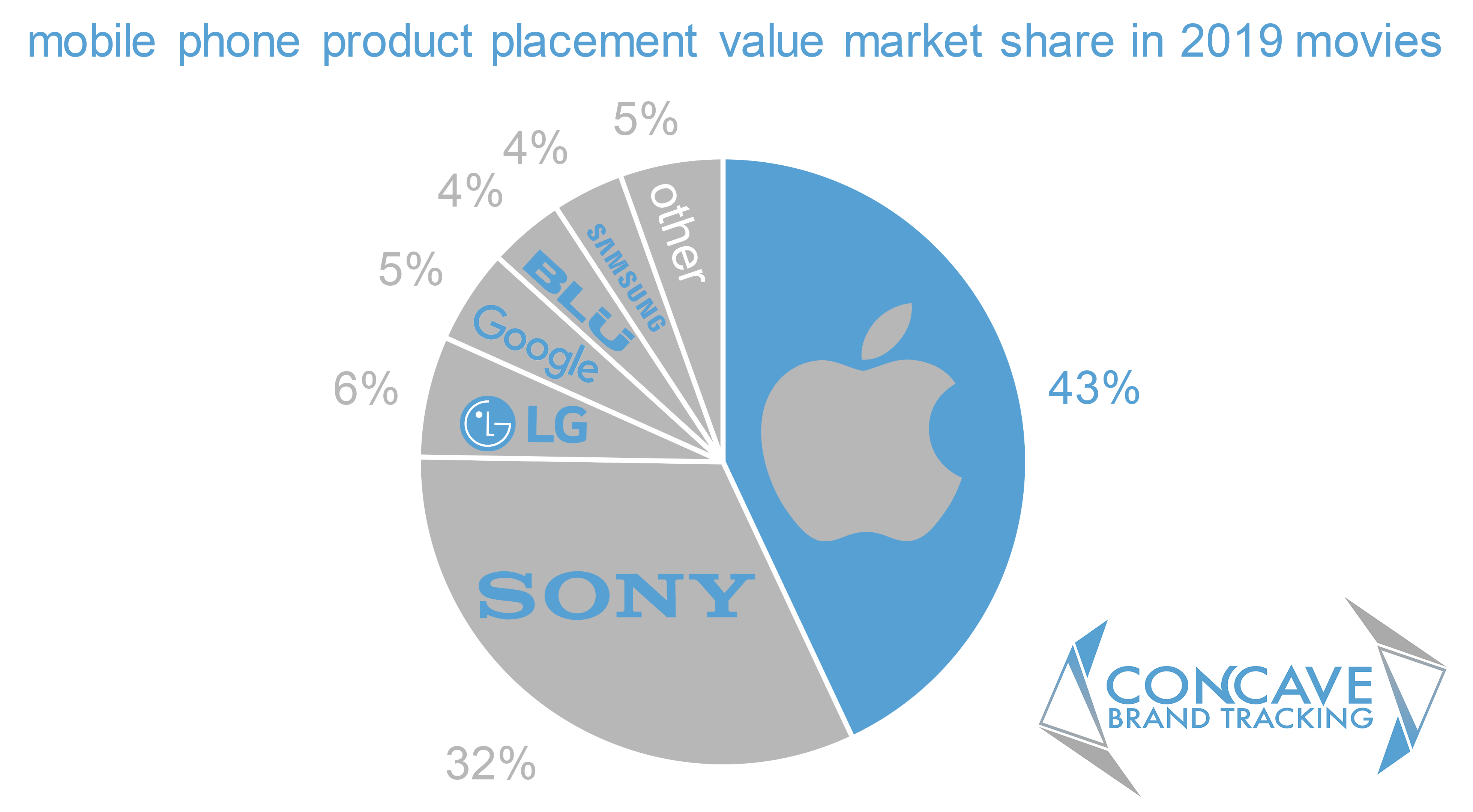 With appearances in 80% of all movies that featured at least one brand, including the highest-grossing of all time and a film about the brand’s historic participation in the 1966 Le Mans race, Ford was, by far, the most visible brand in 2019 movies.

Ford’s exposure in FORD V FERRARI was worth the 7.1 million dollars and was the 6th best integration of 2019.

It also got the 10th most value of any brand in a single 2019 movie from its appearance AVENGERS: ENDGAME.

Ford has been no stranger to successful product placement in recent years. It has never ranked lower than #13 and only been outside of the top 10 brands once since Concave Brand Tracking started publishing its top 100 list in 2014. Most recently, Ford was #5 in 2017 and #3 in 2018.

One of the many reasons for Ford’s dominance of entertainment marketing is the breadth in the use of its vehicles. The brand appeared in the form of ambulances (3% of screen time), taxis (4%) and police cars (24%). More broadly, Ford vehicles were portrayed as being professional in 53% of its screen time. Other associations included cross country driving (2%), crime (8%), speed (17%) as well appearing in historical or “old school” contexts in 35% of its screen time.

Check out our in-depth analysis of Ford’s #1 position in 2019 movies.

Check out more articles about our annual recap of product placement in 2019 movies:
– the full top 100 brand list
– the top 10 most valuable single-movie product placements
– our closer look at Ford’s #1 position