Concave Brand Tracking combed through all 10 episodes of the first season of Netflix’s new show, SPACE FORCE, recording every brand that appeared or was mentioned. We found 96 brands whose products appeared on screen while 55 were mentioned in the dialogue. Overall, SPACE FORCE featured 148 different brands.

Concave Brand tracking has created proprietary models to estimate the viewership of Netflix shows and value product placement. Using these, we have found that an estimated 4 million viewers worldwide watched SPACE FORCE in the first three days on average since its release. Based on these viewership estimates as well as brand discernibility and screen time, we value the total exposure enjoyed by the 148 brands to be worth just over six million dollars.

Here are the 10 most visible brands through all of season one of SPACE FORCE:

disclaimer: Concave Brand Tracking does work with some of the brands in this article, but all our data collection is entirely objective.

The helicopter used by Steve Carell and piloted by Tawny Newsome is a Eurocopter AS350. It had almost three minutes of screen time across seven episodes.

The brand is associated with professional and military use as well as transport. Carell’s character uses the helicopter to travel between his military base and various locations he visits in the show.

Although Eurocopter was rebranded as Airbus Helicopters back in 2014, it continues to appear in TV and films alike. Most recently, it appeared in EXTRACTION, also on Netflix.

While Eurocopter might no longer exist as a brand, Maybach was recently revived as a sub-brand of Mercedes, as Mercedes-Maybach.

It appeared in SPACE FORCE in the seventh episode as the luxury car of Edison Jaymes (played by Kaitlin Olson). The character is an ultra-wealthy serial entrepreneur who travels to the military base in her 2018 S 560 Mercedes-Maybach with a convoy made of up Mercedes-Benz and GMC SUVs.

This associates Mercedes-Maybach with having a chauffeur, business, luxury, transport, professional use and security. It gets just over one and a half minutes of high-quality exposure.

Although Mercedes-Maybach vehicles have only been in production again since 2015, the brand almost immediately started reappearing on screen. It has appeared in such movies as SPECTRE (2015), THE LAUNDROMAT (2019) and CHARLIE’S ANGELS (2019).

As for TV, Mercedes-Maybach has featured in RAY DONOVAN, SUITS, BILLIONS, DYNASTY, SUCCESSION, THE RUNAWAYS and GOLIATH, to name just a few.

LG appeared in SPACE FORCE in the form of TVs. It racked up over five minutes of screen time across eight episodes and was portrayed as a professional brand used in meetings as well as for entertainment. One character is seen watching Dr Phil on an LG TV.

LG is a common product placement brand and was the 42nd most visible brand in 2019 films. Its phones appeared in PARASITE, its monitors in CHILD’S PLAY and THE UPSIDE and its TVs in FIGHTING WITH MY FAMILY, LONG SHOT and BOMBSHELL.

LG has also appeared in such TV shows as BALLERS, HOUSE OF CARDS, BOSCH, VEEP and JACK RYAN.

Randolph Engineering were the sunglasses of choice for Steve Carell’s character. They appeared in three episodes, for almost three and a half minutes of screen time. This exposure was worth $175,000 in the first three days since SPACE FORCE came out, with this figure undoubtedly going up significantly as people watch the show on Netflix for years to come.

This product placement associates Randolph Engineering with professional and military use.

The brand regularly appears in TV and film. Liev Schreiber could be seen sporting Randolph shades through the run of RAY DONOVAN. Much like Damian Lewis on BILLIONS and Wendell Pierce on JACK RYAN.

In film, Randolph Engineering has been worn by Jason Statham in WILD CARD (2015), Woody Harrelson in WAR OF THE PLANET OF THE APES (2017), Zack Efron in BAYWATCH (2017). Most recently, Brie Larson wore Randolph Engineering in CAPTAIN MARVEL (2019) as did Ryan Reynolds in 6 UNDERGROUND (2019).

In episode 6, Raytheon and Lockheed Martin face off over who will supply equipment to the newly formed SPACE FORCE. While Raytheon is only mentioned by name, the Lockheed representative wears a company hat and jacket, clearly showing they cooperated with and wanted to be linked to the show.

As a defense company, Lockheed Martin does not often appear in film or TV.

Chevrolet was the most visible car brand in SPACE FORCE. It appeared in four episodes as Steve Carrell’s 2019 Malibu and Jimmy O. Yang’s 2017 Colorda truck. The added up to over three minutes of screen time in which the brand’s logo was visible in 81%. This exposure was worth $217,000 for Chevrolet, just in the first three days since SPACE FORCE premiered.

Unlike most brands on this list, Chevrolet was portrayed as a civilian vehicle. Other car brands that did not make this top 10 included Dodge, Ford, GMC, Nissan and Toyota.

Chevrolet is an omnipresent across all of entertainment. It consistently appears in music videos, movies and TV. In 2019 it was the 5th most visible brand in film.

Apple appeared in all but one episode of SPACE FORCE S1 in the form of computers, laptops, tablets and, most of all, iPhones. Apple phones were used by many actors, including Ben Schwartz, Diana Silvers and Steve Carell (he also uses a Google Pixel and a Blackberry Keyone). One reason Apple is not higher on the list, and why you may not have noticed it, is that its logo is only visible once in the whole season.

Despite not being overly visible in SPACE FORCE, Apple remains one of the most visible product placement brands of all time. It was the 2nd most visible brand in 2019 movies and features in most TV shows.

There are two ways of achieving a good amount of exposure in a show like SPACE FORCE. A brand either appears very visibly for a moderate amount of screen time or appears more subtly for a long time. While brands like Mercedes-Maybach and Lockheed did the former, Cisco did the latter.

Cisco telephones and conference speakers are present in the offices, conference rooms and control room of the Space Force base for a total of over 17 minutes of screen time. It is also the only brand on the list – other than #1 – to appear in all 10 episodes.

While Cisco did feature in six 2019 movies, it has a much bigger footprint in TV. Over the years Cisco has appeared in many TV shows that take place in offices including BILLIONS, NEW AMSTERDAM, SUCCESSION, VEEP, SILICON VALLEY and PARKS AND RECREATION.

As we’ve already seen, Steve Carell’s character frequently flies around in his Eurocopter helicopter. Usually, when doing so, scenes inside the chopper are shown with him and his passengers wearing David Clark headsets. In this way, the brand had over 10 minutes of screen time, with its logo visible in 54%.

This appearance associates David Clark with flying as well as professional military use.

David Clark is a niche brand, dealing exclusively in communication headsets for high noise environments. However, it accounts for over 30% of all the headset product placement value recorded by Concave in films over the past 17 years. This is far more than any other brand. The only competitor to even get close is Bose. David Clark was the 58th most visible brand in 2018 film and the 46th in 2016. It has appeared in many blockbusters, including CAPTAIN AMERICA: THE WINTER SOLDIER (2014), FURIOUS 7 (2015), DEADPOOL 2 (2018) and RAMPAGE (2018).

Dell was overwhelmingly the biggest product placement winner in season 1 of SPACE FORCE. It accounted for 42% of all the brand exposure generated by the show. Its monitors could be seen in virtually all the interior scenes at the Space Force headquarters. All desks were equipped with them, the main control room was filled with them and the Dell logo was clearly visible a lot of the time.

This product placement by Dell furthered its brand image as a professional brand used at all levels of government.

Between Dell being so visible and SPACE FORCE being watched by millions of people worldwide, this might be the most successful TV product placement ever for Dell. And this is no small feat given that the brand has featured heavily in many major shows across cable TV (BLUE BLOODS, BULL, THE BIG BANG THEORY), premium cable (BILLIONS, RAY DONOVAN, SILICON VALLEY) and web shows (OZARKS, BOSCH, JACK RYAN). Dell got over three million dollars in product placement advertising value from the first three days since SPACE FORCE premiered. 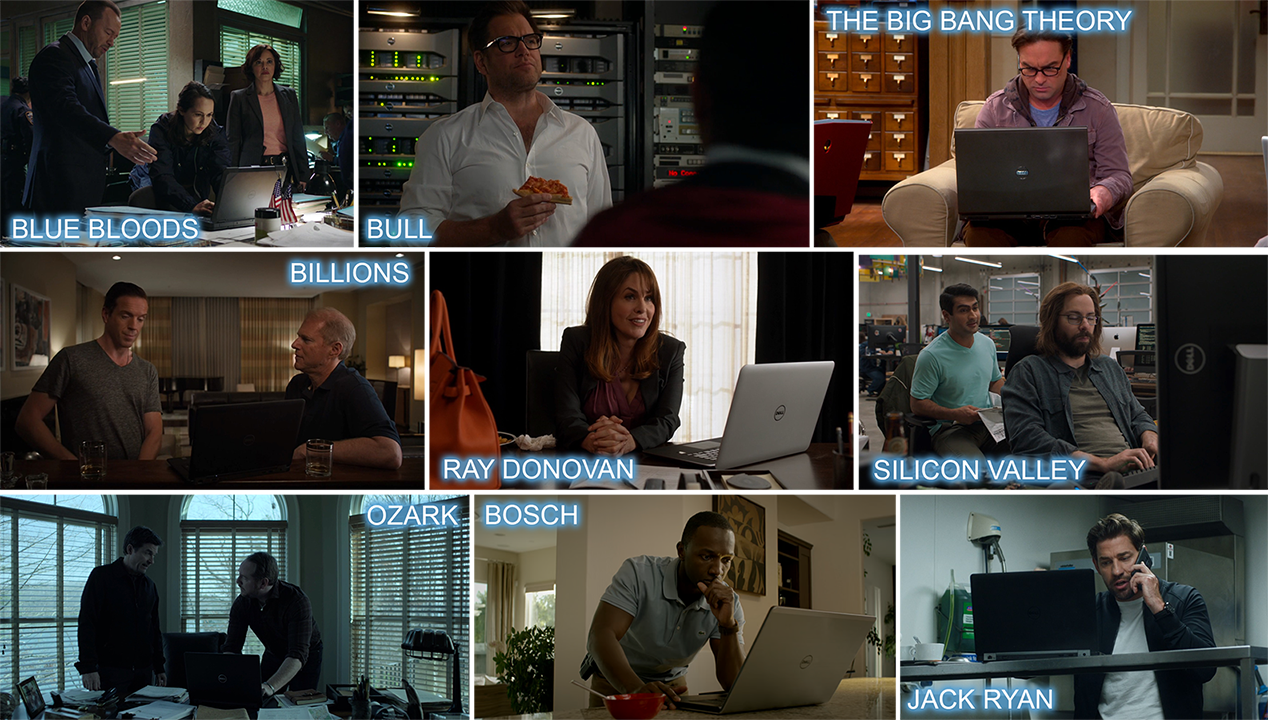