Concave Brand Tracking has manually combed through the 50 most viewed movies in 2020 (accounting for both theatrical and non-theatrical views), recording every brand that appeared or was mentioned. We also measured how visible the product placements were, how long they were on screen for, and how much advertising value they generated.

Using an in-house model which factors mentions, screen time, product discernibility, logo visibility and global viewership, Concave Brand Tracking has determined the total global value of each of the partnerships. Here are the top ten most successful product placement in 2020 movies, ranked by total advertising value:

#10 Porsche in BAD BOYS FOR LIFE

BAD BOYS FOR LIFE was the biggest 2020 movie in terms of total product placement value. As such, it should come as no surprise that two of its most visible brand make this list. The first is Porsche.

With Will Smith driving a 2020 911 Carrera FS throughout the movie, Porsche received over 7.5 million dollars in product placement from BAD BOYS FOR LIFE. This was thanks to a combination of high quality of exposure, a good amount of screen time and BAD BOYS FOR LIFE having the largest 2020 audience when we combined theatrical and non-theatrical views.

Porsche was the 19th most visible brand overall in 2020 movies. While it did appear briefly in TENET and was mentioned in WONDER WOMAN 1984, this ranking was primarily due to BAD BOYS FOR LIFE.

Chevrolet was the 4th most visible brand overall and the second car brand in 2020 films. It achieved this with appearances in 26 of the 50 biggest films of 2020. With SPENCER CONFIDENTIAL being one of the most-watched movies of the year and Chevrolet having almost four minutes of high-quality exposure, this partnership was the 9th most valuable of the year. It was worth nearly eight million dollars. However, Chevrolet is only the first of three placements from SPENSER CONFIDENTIAL to feature on this list.

Another car brand that featured heavily in SPENSER CONFIDENTIAL was Buick. Mark Wahlberg drives a 1984 Buick Riviera in much of the movie. The brand was showcased in many close-up shots and had over five minutes of screen time. Overall, this placement was worth over eight million dollars.

Buick appeared in nine other of the 50 most watched movies of 2020 and was the 17th most visible brand in film overall.

This appearance in SPENSER CONFIDENTIAL was one of Buick’s all-time most visible. It has also been spotted in HOUSE OF CARDS, LA LA LAND (2016) and, most recently, WANDAVISION.

#7 Dell in BAD BOYS FOR LIFE

Dell was the third most visible brand in 2020 movies. It achieved this thanks to integrations in 19 movies, of which BAD BOYS FOR LIFE was the biggest. It was worth over 8.5 million dollars and featured Dell for five minutes of screen time. This included many close-ups. Once again, BAD BOYS FOR LIFE being the most-watched movie of the year was also a major boost to the value of this partnership.

Other 2020 movies in which Dell appeared included SPENSER CONFIDENTIAL, THE WRONG MISSY, UNDERWATER, THE MIDNIGHT SKY and THE INVISIBLE MAN.

#6 Persol in THE GENTLEMEN

THE GENTLEMEN was only watched by 58 million viewers worldwide, much less than any other movie on this list. However, it was still the third biggest product placement movie of 2020. This was due to the extensive screen time received by the over 60 brands the film featured. Three of these made our top 10 placement list.

The first was Persol. This was the brand of glasses worn by Charlie Hunnam during most of the movie. The Luxottica brand got almost 20 minutes of screen time, although its logo was never visible. This placement was worth nearly 10 million dollars.

#5 Ray-Ban in THE GENTLEMEN

Ray-Ban also appeared throughout THE GENTLEMEN. Hugh Grant wore a pair of their Wayfarers for almost 15 minutes of screen time. Despite having less time on screen, this placement by Ray-Ban was worth more than Persol’s thanks to its logo being visible some of the time. This elevated the quality of exposure and the value. Persol’s placement in THE GENTLEMEN was worth almost 12 million dollars.

The most visible brand in SPENSER CONFIDENTIAL was Ford. It had over 11 minutes of screen time in the form of Crown Victoria and Interceptors Utility police cruisers, Expedition and Explorer SUVs, Fusion cars and a Transit van. This exposure was worth 12 million dollars for Ford and made it the #2 brand in 2020 movies.

Other brands that appeared prominently in SPENSER CONFIDENTIAL included Dell, Apple, Nissan, Peterbilt, Cadillac, Pro Boxing Supplies, Cotopaxi and Skullcandy.  All of these brands can be found on Concave’s top 100 brand list for 2020.

In 2018, Toyota was the 8th most visible brand in film. While it appeared in lots of movies, it was its unmissable appearance in BLACK PANTHER that propelled it into the top 10. That integration was the third most valuable of that year.

Similarly, in 2020, Toyota appeared in 29 of the 50 most-watched films of the year. But it was its placement in EXTRACTION that insured its place among the most significant brands of 2020.

Toyota was the most visible brand in EXTRACTION, which was one of the most brand-filled movies of 2020. According to IMCDB, 19 different models appeared in the movie. Many were just background cars, but most of the police cars were Toyota Corollas. Chris Hemsworth, David Harbour and Golshifteh Farahani all drove Toyota SUVs. This all added up to over seven minutes of screen time and was worth nearly 12 million dollars.

Chris Pine wore a Members Only jacket for over 10 minutes of screen time in WONDER WOMAN 1984, and it was the most visible brand in that movie. This was the only major movie to feature Members Only in 2020.

With an estimated 122 million viewers seeing the film as of February 2020, this placement was worth over 12 million dollars for the retro 80s brand. Beyond Members Only integration in WW84 being the 2nd most successful single film placement of the year, it was also enough to make it the 10th most visible brand in 2020 movies.

Members Only was very proud of the appearance of its jacket in Wonder Woman 1984 and touted it on their website.

Although Members Only has never appeared on our top 100 list, it has featured in such films as JUST MERCY (2019), SOUTHPAW (2015), THE PURSUIT OF HAPPYNESS (2006) and the Showtime series RAY DONOVAN.

Members Only was far from the only brand in WONDER WOMAN 1984, with brands varying from Mercedes and Rolex to Commodore and JC Penney all getting a share of the film’s nearly 60 minutes of brand screen time. The quantity of brand and the film’s success made it the 4th biggest film for product placement in 2020.

#1 Lonsdale in THE GENTLEMEN

At number one we have another brand that appeared in a single 2020 movie: the British sporting brand Lonsdale. It was worn by an array of characters in THE GENTLEMEN, including Colin Farrell. This resulted in over 16 minutes of screen time with its logo visible in 84% of it. With THE GENTLEMEN having been watched by over 58 million viewers worldwide between its theatrical and post-theatrical runs, this placement has been worth 16.5 million dollars to date. 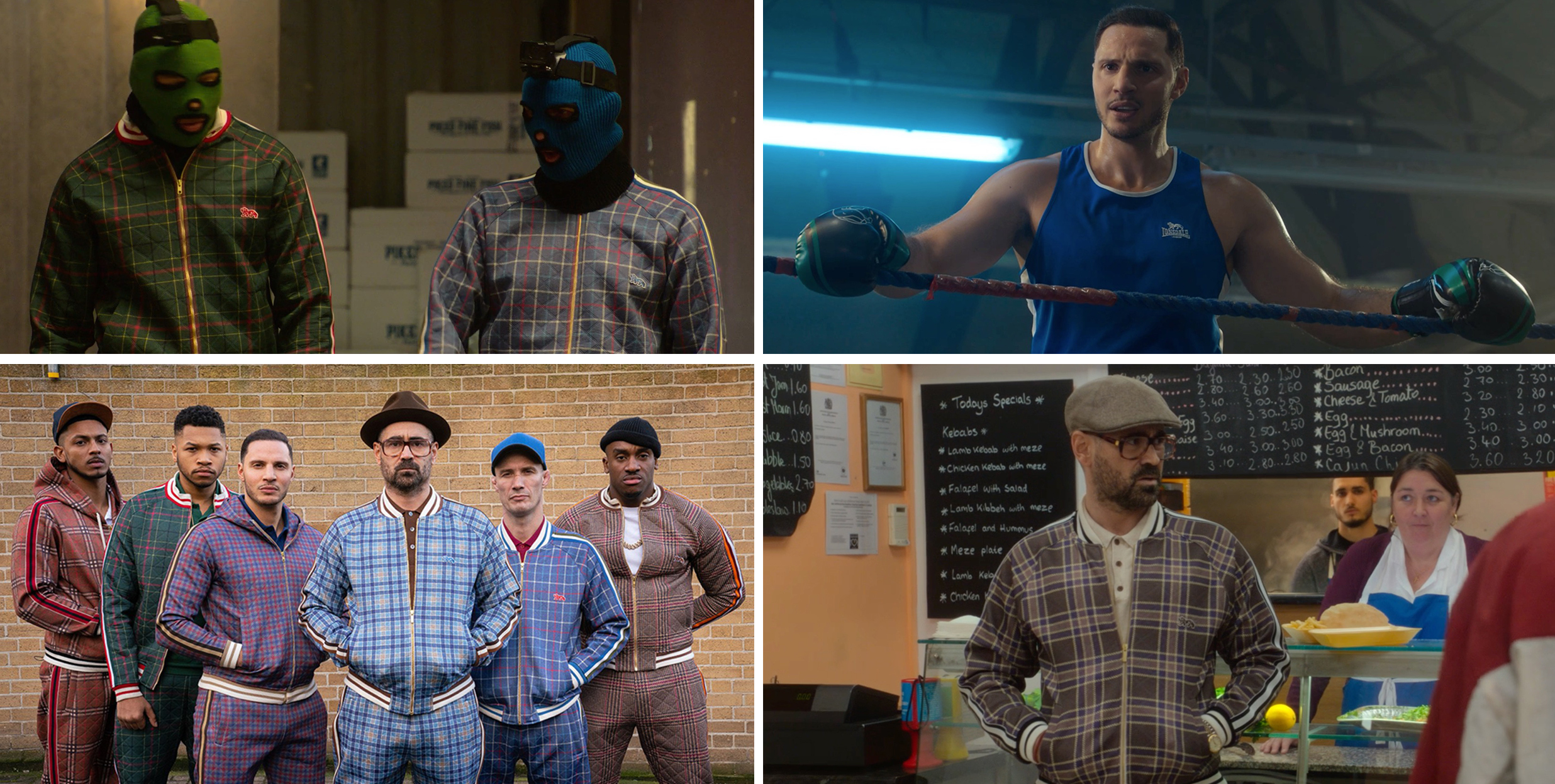 Lonsdale was heavily involved with this placement. The tracksuits worn in THE GENTLEMEN were designed for the film and are on their website. 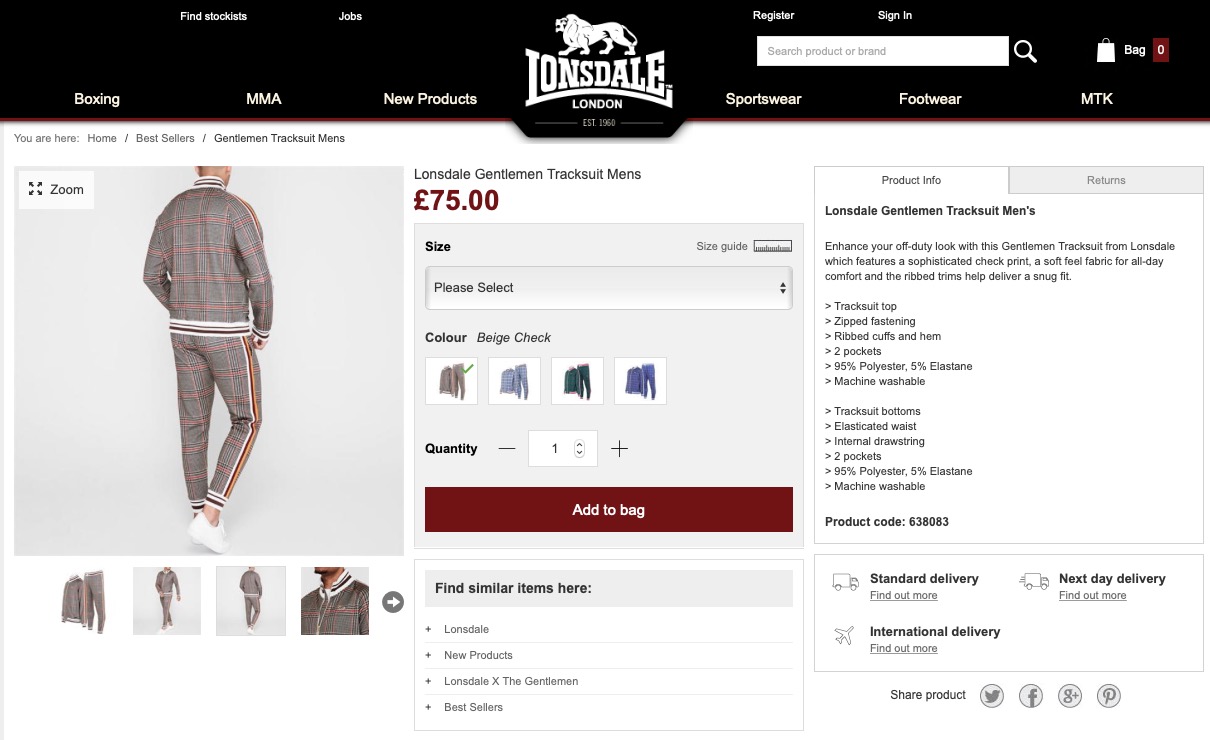 Lonsdale is not a common brand in film, but over the years, it has appeared in such films as FIGHTING WITH MY FAMILY (2019), KINGSMAN: THE SECRET SERVICE (2014) and THE ITALIAN JOB (2003).

Check out our other articles about brands in 2020 movies:

– see the 10 movies with the most product placements of 2020